Guns N’ Roses’ “One in a Million” Gets Axed. 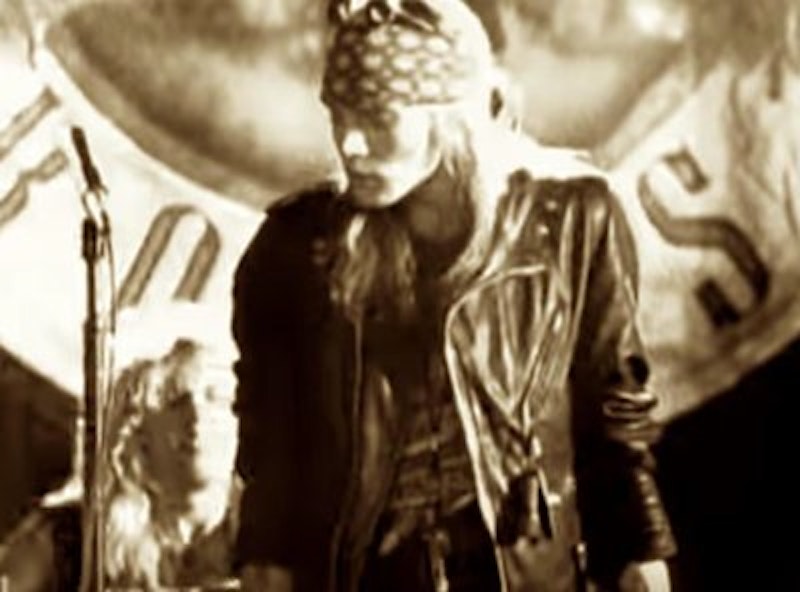 It took 30 years, but political correctness has claimed its most important scalp: the song “One in a Million” by Guns N’ Roses is gone from the band’s recent re-release album.

The excision was relatively subtle, one might say cleverly so, since the re-release in question is not technically the EP Lies, on which the song appeared back in 1988, but rather the LP Appetite for Destruction—with bonus tracks that include every song from the Lies EP except “One in a Million.” It’s sort of like a leftist mayor announcing a package of subsidies to every restaurant in town except Chick-fil-A.

If you know the song, it’s no mystery why it got the axe. Its narrator tells us clearly that “Immigrants and faggots/They make no sense to me,” and he’s not too crazy about “Police and niggers,” either. I’m not a paleoconservative and have no interest in defending the song as folksy profundity, nor debating the accuracy of the narrator’s warning that if immigrants “come to our country” and then “do as they please” they might “start some mini-Iran or spread some fucking disease.”

I do tend, though, to defend the right of artists to depict crazy, angry narrators, and precisely because Axl Rose is poetic enough to paint portraits of vivid characters in extreme states of mind—on heroin, drowning, fleeing cops—it can be argued he’s not quite synonymous with or wholly approving of the “small-town white boy” in “One in a Million” who warns “It’s been such a long time since I knew right from wrong” and who admits being called “lazy” and “crazy” by acquaintances. He seems sad about his nihilism, too, not sneering and superior-feeling. He sounds like he’s fading away and dying as he mopes that he doesn’t even need religion, “don’t watch that much TV.” Pity this psychotic wretch. Don’t just erase him.

If we defend rappers rapping about shooting cops and reggae singers singing about shooting other cops, I think we can at least make an effort to evaluate—and preserve—“One in a Million” for its artistic value instead of its etiquette adherence. (If you hate Axl this week, did you love Childish Gambino shooting people last week, by the way? They may be expressing similar frustrations with a confusing world.)

Mainly, though, the song sounds awesome, especially the classical-ish guitar, inoffensive in any language. It’s very hard to argue with that—unless you have that new Appetite rerelease with a big dark sucking void where “One in a Million” should be, that is, making it harder to demonstrate to visitors how awesome the song is.

By current cultural standards, though, I can’t feign surprise or outrage (as if we need more outrage) that the track is gone. Obviously, it’s offensive, even shocking. But before banishing the song’s narrator, remember that we accept a role for badboy characters who are not exactly role models in various other works of art.

I mean, we’re in big trouble if kids come out of Deadpool 2 this week trying to be just like Deadpool, but most won’t. I’m not even sure we want them to be just like Tony Stark. I remember thinking 10 years ago he might represent a turn away from liberal sensitivity and toward the valorization of badboys. Apparently, it wasn’t a smooth turn but rather a break between two currently warring halves of the culture, one callous and one hypersensitive, with many people feeling caught in between and keeping their mouths shut. Han Solo isn’t going to be all sweetness and light next week either, I imagine. He is a scoundrel, you know.

I guess excising “One in a Million” is better, though, than hastily rewriting its lyrics to suit the current era’s sensibilities. Maybe something like:

Have different perspectives than me

They come to (or remain in) this country

And think they’ll do as they please

Or face higher risks of some disease

This is, by the way, the second time I have publicly altered the lyrics to “One in a Million,” since I created and sang a free-market-themed version for a libertarian gathering many years ago. Times have changed since then, though. For one thing, my co-singer from that day is no longer a male, having since taken on the name and physical attributes of Deirdre McCloskey while remaining an acclaimed economic historian.

That’s the sort of memory that startles me a bit in the past couple years—not because a Donald becoming a Deirdre is so unheard of but, on the contrary, because the outrage mobs these days, in Orwellian fashion, would love to make you believe there was no nuance or complexity in the past, no unusual cases, no friendly efforts to get along, no room for appropriate humor. It was all just hate and oppression and zero sexual ambiguity until 2014 or so (when according to Wikipedia, most genders suddenly sprang into existence).

Or at least, pretending the past was all hate and badboy singers all Klansmen allows the outrage mobs to pose and morally preen as if they’re the first enlightened, tolerant generation in history, the easier to make subsequent guilt-tripping demands upon you, you shameful product of a shameful past.

Similarly, beware anyone—from any political faction—who tries to make you forget how much U.S. race relations improved over the half-century from the 1960s to the 2010s, one of the most important stories in human history. It’s so much easier for them to create a (tactically useful) sense of crisis and confusion if they can dupe you into believing no one was able to negotiate or coexist with others until the outrage mobs recently came along. That amnesia gives them license to teach us all what’s what, as if we’re newborns who haven’t yet heard T is for Tolerance.

It’d likewise be much easier for them if I were some sort of hick cracker who hates all marginalized people, so they could pretend only idiots like old Guns N’ Roses songs. But, hey, I’m also giving a graphic novel biography about the ultra-sensitive Morrissey and the Smiths to friends this week, and that couple, too, likes both GNR and the Smiths. They have a soft spot for outcasts and alienated weirdoes, whether from Indiana or Manchester. I don’t know if the number of outcasts and weirdoes was larger in the U.S. in the past, but many of us are starting to worry there were more soft spots back then and only prickliness now, masquerading as increased sensitivity.

We were once smart enough to listen to “One in a Million.” I hope we’ll become that wise again.