His best singing was on the Decca audition tape. 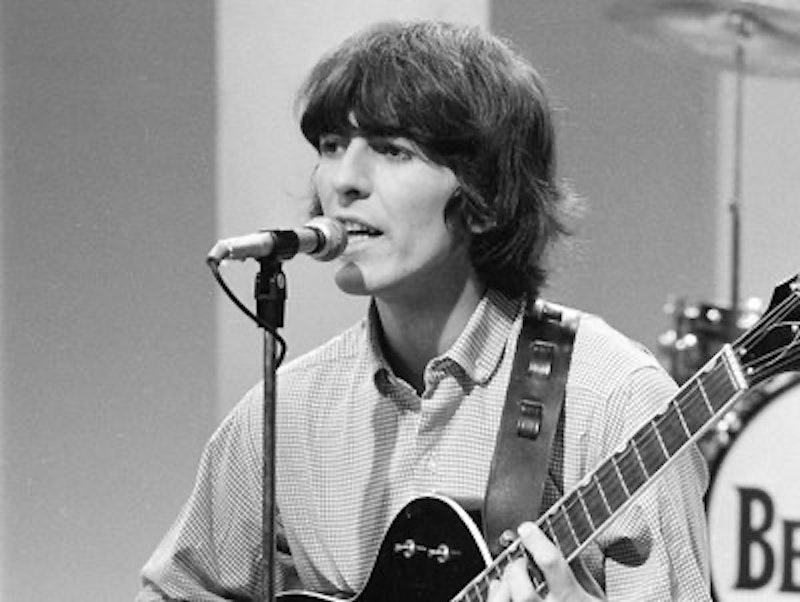 1. George Harrison’s voice may be the only big-time rock voice that I find irritating. It’s skimpy; it doesn’t measure up. Sounding odd or malformed can be all right for a rock voice, as with Bob Dylan, Neil Young, and Joe Strummer. An ugly voice will do, but a skimpy voice is nothing. Harrison’s voice is like a fish skeleton laid on a plate. Something’s supposed to be there, but it isn’t. You’ll have to make a meal of this instead.

2. George’s face is skimpy too. Early in middle age, he started looking like a railway clerk who’s off in five minutes and is willing you to keep it short. The moptop George was a looker if photographed right. He had the cheekbones, and the hair closed in on them. This effect sealed off consideration of the rest of his face, and the picture’s lower frame was supplied by the striking black-white contrast of his shirt collar and jacket collar. When George looked at the camera, a good photographer could present you with a glossy-banged, high-boned pop aristocrat. But usually his faced looked like it had too much in the ears and not enough anywhere else.

3. George knew how to speak up. When young, he did it to good effect. At the JFK press conference, he scores one of the big jokes. (“Are you going to get haircuts at all?” “I had one yesterday.”) When Princess Margaret overstays at the Hard Day’s Night party, he marches up to her and says, “M’am, we’re starved, and Walter says we can’t eat until you leave.” Walter is Walter Shenson, the movie’s producer, and he tells us the story in Philip Norman’s Shout!, including that Princess Margaret laughed and took it. At Apple somebody had to clear out the Hell’s Angels, who were overstaying a visit. George marched up to a Hell’s Angel named Spider and asked if they were moving out. Spider placed himself “six inches from George’s nose,” according to the Apple survivor Richard DiLello, who describes the scene in his The Longest Cocktail Party. Spider said, “Hey, man. I just wanna ask you one question. Do you dig us or don’t you?” George answered, “Ying and yang, heads and tails, yes and no.” Spider: “All right, man, I can dig it.”

4. Early George manages a decent “Roll Over, Beethoven.” The studio version is okay: as the song gallops along, one finds him endearing with his stubborn, knock-kneed voice. But on YouTube there’s a concert clip with George doing a “Beethoven” that’s decent-plus. Imagine stepping to the microphone, rising to the occasion, and singing “Roll Over, Beethoven” for the crowd and doing it in a way that gets by instead of being a flop. George did that. Not many people can. In baseball, you have the major and minor leagues; the people in those leagues play better ball than the rest of us. Performance-wise, George is a minor-leaguer placed at the top of the majors.

5. George’s best singing was on the Decca audition tape. Listen to his “Take Good Care of My Baby.” His voice sails firmly—well, pretty much. It’s always going to sound like a homemade instrument, but here it does what it to get the song across. A slender voice, but not thin, and one steady enough to put across emotion. His voice fills the gap, and the song works.

6. Really, though, as a solo artist he should’ve hired a singing duo and had them trade off leads, with him chiming in on harmonies. He never sighted around rock star assumptions and his own vanity to recognize that his music would benefit from people with strong voices. Too bad. He could’ve made them both girls, and it would’ve been interesting.