John Lennon, His Engineer, and the Mystery of the Chanting Monk 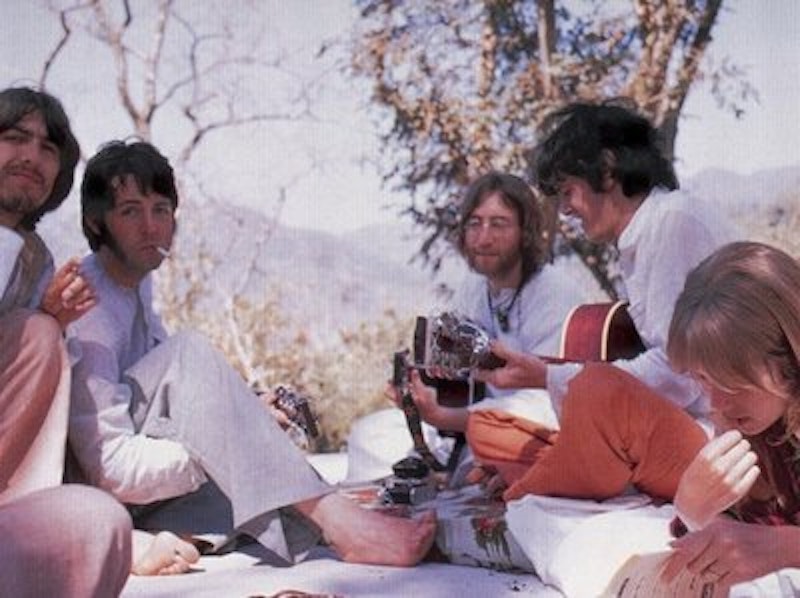 “They had no idea how to operate the mixing console or the tape recorders; they didn’t want to know, any more than we wanted to learn how to play guitar or sing songs.” Thus the Beatles’ tech savvy as described by the chief engineer on Revolver, Sgt. Pepper’s Lonely Hearts Club Band, the White Album (he walked off partway through), and Abbey Road. Geoff Emerick gives his assessment in Here, There and Everywhere: My Life Recording the Beatles, a look back that should fascinate anyone curious about the Beatles and their work.

Emerick doesn’t mind that the Beatles never figured out the knobs. “They were the artist,” he says, “and their focus was solely on the music. That’s the way it should be. That’s the way great records are made.” If I might flesh out his logic: a diner doesn’t go into the kitchen and mess about with pots and pans, and a recording artist doesn’t bother about the control room. The problem, of course, is that the diner here is also the chef. The recording artist makes up a dish. Getting the dish to come out right would seem to be something the artist ought to have a hand in. For the layman, it’s tough to see how the creator of a heavily produced album can remain the creator without actively guiding the production, as opposed to throwing demands at the staff and then accepting what the staff throws back. But that’s the way of it. As John Lennon demanded during an ill-tempered period, where are George Martin’s albums? And where, we must add, are Geoff Emerick’s? John, Paul, and George created albums, Martin and Emerick somehow served up the albums being created. The line between creating and merely serving up does exist, tricky as it is for an amateur to find it.

Ingmar Bergman once said that cinematographers don’t want a director to talk about finding a macrocosm in a microcosm, or any nonsense like that. Tell them the lens you want, Bergman said. According to Emerick, Paul McCartney could at least name the instruments or kinds of instruments that he’d like to hear. “This song needs brass and timpani,” he might say. But John Lennon belonged to the macrocosm-in-a-microcosm school. “Give me the feel of James Dean gunning his motorcycle down a highway” is how Emerick phrases a typical Lennon request. Well, if a chef said, “Give me a blend of seasonings that says yes to life,” I’d figure that whoever devised that blend had done more than the chef did.

On Emerick’s first day as the Beatles’ regular engineer, he was confronted with perhaps the best-known of Lennon’s directives: “And I want my voice to sound like the Dalai Lama chanting from a mountaintop, miles away.” They were about to record “Tomorrow Never Knows,” and Emerick had to find something that matched Lennon’s word picture. “I looked around the room in a panic,” he recalls. “I thought I had a vague idea of what John wanted, but I had no clear sense of how to achieve it.” His brain raced as they worked on a backing track. “The whole time, I kept thinking about what the Dalai Lama might sound like if he were standing on Highgate Hill, a few miles away from the studio,” he writes. Reviewing the equipment in the studio, he hit on something called a Leslie. Normally used to make Hammond organs sound the way they sound, it came in handy for altering Lennon’s voice once some wires had been adjusted. “That is bloody marvelous,” Lennon said, listening to the playback.

It’s pretty darn good, but how did Emerick get from Highgate Hill to the Leslie? If Lennon were chanting on a mountaintop miles away, nobody could hear him. Even if the mountain were right nearby, he’d be too high up for his voice to carry. To make anything of Lennon’s request, you have to supply a key part that he left out, namely that the listener would be on another mountaintop. Then you can get an idea of what’s intended. Emerick not only had to hit on the right gear to produce Lennon’s sound, he had to imagine what that sound was. This imagining strikes me as co-authorship, as opposed to midwifing.

But Emerick doesn’t see it that way, and Lennon certainly didn’t either. They’d know and I wouldn’t, and their output backs them up. Lennon committed multiple acts of genius before, during, and after his time working with Emerick. Emerick has had a long career distinguished by top-notch proficiency but not by genius. No, I can’t see how the vocal in “Tomorrow Never Knows” is more Lennon’s achievement than Emerick’s. But either way, our compliments to the chef, whoever he was.