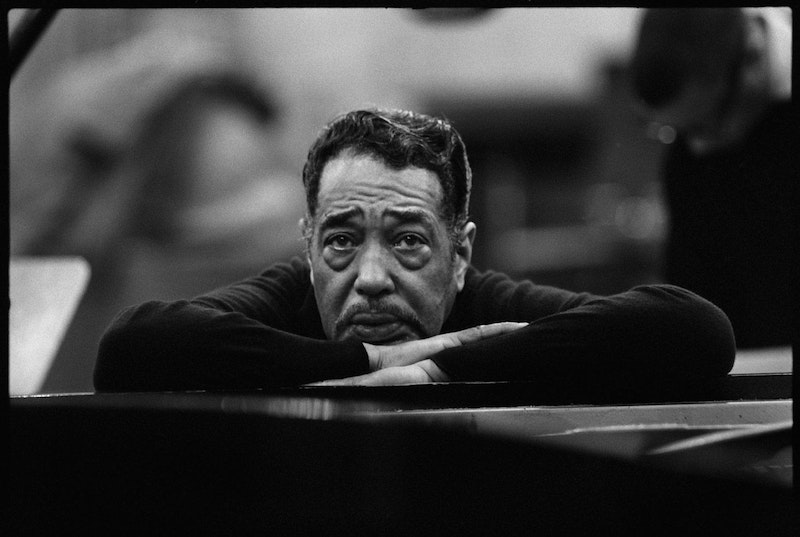 Because of the battle that jazz fought, and lost, with rock 'n’ roll and other forms of pop music—the 1960s were the beginning of the end for jazz—you probably don’t listen to a lot of Duke Ellington unless you’re a “jazz guy.” His reputation for being pivotal has done him no favors, either; he seems like a kindly old grandfather of the genre, obvious and respectable, instead of embodying "the cool" like Miles Davis or John Coltrane. It is, in short, hard to find one's way back to Duke Ellington. Listening to music shouldn't feel like musicology, or like enduring a PBS special.

If you do start to listen, however, something remarkable pours out of your speakers: a sound that’s blessed with all the contradictions of recorded music, and the contradictions of style itself, in the 20th Century. Consider Ellington's career, beginning in the mid-1920s, and continuing undiminished for 40 years. These years witnessed one revolution after another in the consumer market for popular music, from the heyday of radio in the 20s, to the dominance of the LP in the 60s. Ellington stayed on top by working out a wonderful formula for sounding as though he was live, in your living room, bringing you the romance of the city’s streets with music by turns glamorous and wry.

The key to sounding live, on a record, is giving the audience a chance to hear the band's members talking to each other: taking cues, and running with them. (This is why, in film, outtakes always seem more "live" than the final cuts—the breakdowns reveal the actors as people hard at work.) Ellington simulates this immediacy, this live presence, by telegraphing the way his spotlight is going to move. For example, the trumpets will merge into a single, static note, and—after a crucial and momentary delay—the drums will suddenly stand out, rippling and bursting all around the sustained brass. Or, conversely, the rhythm section will settle into a quiet "walking" pattern, perfectly regular and repeated, to make way for the trumpet or sax—and indeed, a moment later, the solo horn goes madly into a series of honks and dissonant scales. You can hear the band's separate parts deferring to one another, seizing opportunities to shine, and juxtaposing each experiment with bedrock mechanics. Each song becomes a conversation, distinct and courteous; as such, it transports the listener to the site of the melody at the moment of creation.

The tension between sustained notes, flutters of melody, and the restless motion of the whole band—for Ellington, this was the individual in motion. He is always a step ahead or behind his surroundings. "But what about me?" is the first movement in the pattern; "I was there" is the last, uttered in low and wistful tones. (This is why Ellington's titles either frame the melody as a thing in motion, like "Take The A-Train," or else send postcards from exotic places, as in "The Far East Suite.") In between, all is spectacle. The soloist disappears, and the band cues up a sunny old chestnut.

In fact, most of Ellington's recordings begin and end on almost apocalyptic notes, with jarring, woozy chords that tumble, stagger, and descend, then turn on a dime into something utterly hummable and pleasant. The effect transcends irony. For Ellington, “right now” is simultaneously the end times and just another day—striking, perhaps, but ordinary. Each sensibility curbs the other, and preserves the element of surprise; to a quintessentially modern composer like Ellington, these juxtapositions are the lifeblood of high style. The more outrageous they are, the more seamless he makes them sound.

Ellington is a past master of light touches. When you're writing about him, there’s a strongly felt obligation to stop before you go too far and ruin the party with explanations. I've only been able to gesture towards the depths that lie coiled in his modest and solicitous music. He’d want it that way; Ellington doesn't press, ever. But that doesn't make him obsolete or monotonous, once you brush aside the years separating now from then. Oscar Wilde once said that style, not sincerity, was the essential thing. In Ellington, however, there’s no difference between the two. He’s all style; he’s dewy with earnest feeling; he’s part of an ungraspable mystery that defined, for decades, what recordings you absolutely needed to hear. Go back to those records, cease doing everything else, and listen. The voices in his compositions still come across, even now, when their era is little more than a sidelight for hobbyists. The Duke's phrases linger in the air: indelible, sensuous, and alive.