A review of the new album The Boy Named If, in the form of a personal essay. 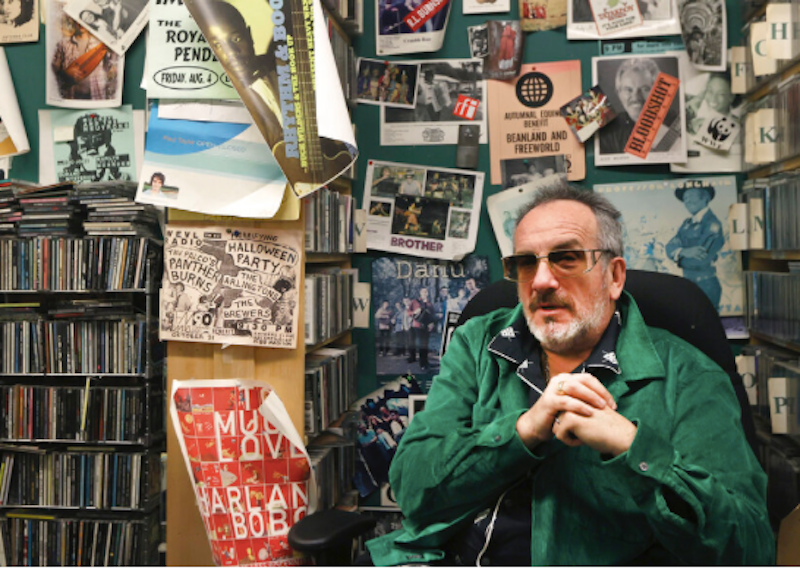 A particular sort of boy was obsessed with Elvis Costello in the 1970s and 80s, and I was that sort: intellectual, verbal, sarcastic, simulating wised-up cynicism, morbidly self-conscious, geeked out on various obscure matters, but still secretly looking for a group to belong to or hero to admire. It wasn’t going to be Bruce Springsteen, for example, with his straightforward New Jersey rock. It was going to be Elvis, who (on "New Amsterdam" from the 1980 album Get Happy!), sang:

“Down on the mainspring, listen to the tick tock.
Clock all the faces that move in on your block.
Twice shy and dog tired because you've been bitten.
Everything you say now sounds like it was ghost-written.

New Amsterdam it's become much too much,
Till I have the possession of everything she touches,
Till I step on the brake to get out of her clutches,
Till I speak double dutch to a real double duchess.

Back in London they'll take you to heart after a little while,
Though I look right at home I still feel like an exile.

Somehow I found myself down at the dockside,
Thinking about the old days of Liverpool and Rotherhithe.
The transparent people who live on the other side
Living a life that is almost like suicide.”

I was arguing then, and might argue now, that Elvis Costello's lyrics are the only ones in rock history that would actually repay literary analysis, that are complex, obscure-yet-clear, finely and carefully wrought enough to sustain serious attention from, let's say, a Milton scholar. Indeed (and though Cole Porter might be a more apt comparison) there are "Miltonic" elements throughout his work, including lines that scan in iambic and bristle with internal and slant rhymes, both of sound and sense. Also, Costello's clever as hell and often very funny. Everything that Bob Dylan isn’t.

After that first classic album in 1977, when everyone of all genders seemed to be listening to "The Angels Want to Wear My Red Shoes" or "Watching the Detectives," I think the audience was dominated by boys. In that era, there were a lot of concerts to which one's girlfriend might drag one; I got waylaid into CSN reunions and even a Fleetwood Mac stadium show. But most of the females attending an Elvis concert circa 1980, I suspect, were hauled there by their boyfriends. And if their boyfriends were anything like me, they honed their chops as baby mansplainers by taking some hours to explain Costello lyrics to the female every time he put out an album. Annoying as shit? No doubt. And yet that they were used in an annoying or oppressive fashion doesn’t affect the quality of those records.

Jamie, my girlfriend at the time, finally just said it. She didn't want to listen to Elvis because he was a misogynist. Well, I explained, he was a geek boy with girl problems. Me too! Someone had to speak for us. Also, I continued, straightforwardly attributing any opinion to Costello in virtue of his lyrics is not necessarily going to work out. Like John Prine, for example, with whom I underwent a similar phase somewhat earlier, he often writes in personae, including women (as in "The Difference" on A Boy Named If). Were these objectionable lines and portrayals spoken by Elvis or by a character he created (and maybe condemned)? I still think Jamie was insufficiently impressed with this point.

As a widescale popular phenomenon, Elvis didn't last much beyond his third album, Armed Forces (with "What's So Funny 'Bout Peace Love, and Understanding?" and "Two Little Hitlers," among others). But I think his best work was after that, on beautifully wrought, varied, and brilliantly-written albums such as Trust (1981), Imperial Bedroom (1982), King of America (1986), Brutal Youth (1994), and All This Useless Beauty (1996). The geek boy was still under there somewhere, but the fine songwriter had emerged.

Costello by the 1980s had a sophisticated sense of melody and song construction and somewhat less interest in the war between the sexes. The songs ("New Lace Sleeves," "Pidgin English," "Kinder Murder," "Jack of All Parades") became melodically complex, tended to abandon or distort the verse/chorus structure, modulated unexpectedly through a series of keys, pulled out changes from standards, jazz, or classical music.

“You go cheep-cheep-cheep between bull's-eyes and bluster,
Stiff as your poker face, keener than mustard.
From your own back yard to the land of exotica,
From the truth society to neurotic erotica.

Silence is golden (money talks diamonds and ermine).
There's a word in Spanish (Italian and German).
In sign language, Morse code, semaphore and gibberish.
Have you forgotten how to say it
In your Pidgin English?”

Still it was the words.

At some point, to my retroactive shame, I stopped paying attention. I don't particularly like Burt Bacharach, and I didn't like the products of their long collaboration, despite the lyrics. By 2000, I thought of Costello, like maybe I thought of Prine (who was also still doing great new work) as an artifact of my youth. You can't help this sort of thing to some extent. I associated Elvis Costello with people, places, events and attitudes that I no longer had or was trying to overcome. I've probably missed 15 albums, and it's too late to catch up this morning, though I pledge to give it a crack.

But Elvis' great new album—The Boy Named If—appears to be intended for people like me: it reproduces but also expands the musical vocabulary he developed in the first couple of decades of his career. References to specific songs from that period are everywhere (for example, the classic-sounding song "Paint the Red Rose Blue" is built out of the melody of "All This Useless Beauty"). But this isn’t self-imitation; Elvis is in another great creative period, but it's also one that makes use of everything he’s already done, all the roots music, all the country, all the funk (he made an album, which I missed, with the Roots), all the Chet Baker. Then he draws it out in different directions, or lets the lyric govern the melodic changes.

I think there was a "prove it" element when he sat down to make this album with the Impostors (the Attractions minus one): after all this work, he might’ve been saying, after cancer surgery and in my 60s, I can still write, and I can still sing just the way I could in 1990, or maybe a bit better. You aging geek boys wanted this: here it is.

And here it is: one of the best albums in his career, and directly in the mode of his greatest work. I won't run through it track by track: you can do that yourself. But I'll quote some bits of "My Most Beautiful Mistake" to demonstrate that he's still a verbal killer, if not a Milton.

“And the camera walks us through into a sunlit room
Where a one-hit wonder lives,
And he says, "Action" and, ‘That's a take’
You are my most beautiful mistake.

‘It's not your reputation I'm trying to besmirch.’
‘I'm here undercover, I'm writing this screenplay.’
‘You might be my inspiration, it's beyond my control.’
‘So it's my soulful and wounded expression, that you'd like to console?’

And the lens pulls the focus on his magnum opus.
He's a one-hit wunderkind,
And he says, ‘Action’ and, ‘That's a take’
You are my most beautiful mistake.

He made a portrait of her face out of burnt out matches.
She said ‘The trouble is, Sunshine, I know what the catch is
You'll offer me nothing, you'll offer me riches
I've seen your kind before in courtroom sketches.’

From the booth in the corner
From a different perspective
Where a man plays the fool or a private detective,
He wrote her name out in sugar on a Formica counter
‘You could be the game that captures the hunter.’
Then he went out for cigarettes,
As the soundtrack played The Marvelettes.

Now I just need someone to mansplain that to.