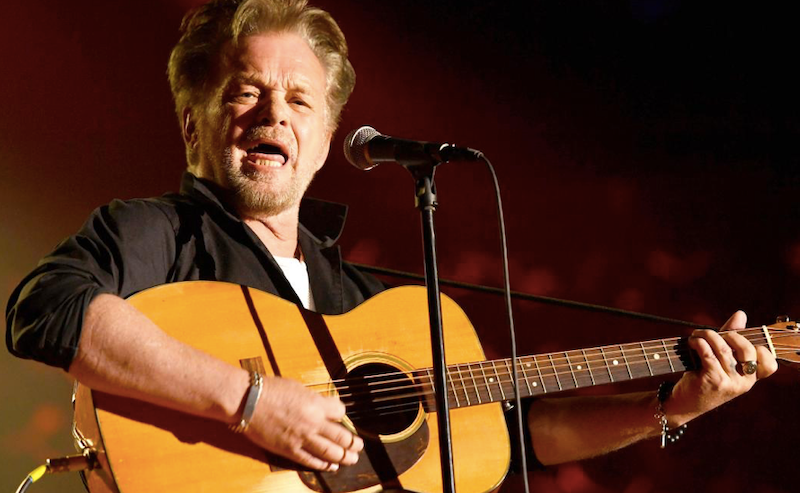 John Mellencamp has made a career as a third-drawer rocker, jostling around with the Pettys and Segers who dream of being Dylans and Springsteens and Jaggers. His 1980s hits—“Jack and Diane,” “Pink Houses”—were big hooky middle-American anthems, with the occasional sardonic message buried under the chesty bombast and comfortingly familiar rock ‘n’ roll.

At 70, Mellencamp has aged out of his pep, though not his familiarity. His new release Strictly A One-Eyed Jack has muddier production and a darker sound, not least because age and cigarettes have taken a toll on his voice. The opening track, “I Always Lie to Strangers,” is atmospheric gothy folk, as the singer intones vaguely ominous hard-living lyrics. “Living by your words is a sucker’s game/and I’m used to taking all the blame,” isn’t a brilliant insight, but it’s given a mordant weight by the fact that Mellencamp struggles to sing it—and by the eerie, minor-key fiddle. Similarly, lifting Tom Waits’ style on “I Am a Man That Worries” is an obvious but reasonably successful choice. Mellencamp doesn’t sound as evil and lusty as he’d like, but the song doesn’t seem ready-made to advertise an auto-dealership either, unlike some of his past hits.

The aged Mellencamp, like the old young one, has a decent knack for songwriting, and isn’t egregiously self-mythologizing like, say, Billy Joel. But he also doesn’t have much imagination. Mellencamp trods where others have trod before him, more or less competently, but without much to add to the roots music he loves. The fact that he brings on Bruce Springsteen as a duet partner for a couple of songs is telling. A 40-plus year career which started with him as a second-rate Springsteen ends with him still Springsteening.

One act he should’ve listened to is the Lost Dog Street Band, whose new album, Glory, has all the bleak, weathered alt-country energy Mellencamp is pining for. The husband/wife duo of songwriter Benjamin Tod and fiddler Ashley Mae started busking in Nashville a decade ago. They’ve listened to some Dylan and Springsteen for sure, but also retro-country (especially on the excellent “Losing Again”), old-timey string band music and the bleak high lonesome sound of bluegrass.

The very first song, “Until I Recoup (Glory 1)” effortlessly captures the effortful sound of dust-stained tough times which Mellencamp has spent his entire career fumbling with. Mae’s fiddle draws across the music like a slow, frozen knife-blade, while Tod’s haunting, weathered vocals slip back and forth over the border of keening.

Only take pleasure when I compete

With a knife in my back outnumbered by three.

Indie record mythologizing and outlaw anthem are fused together with every serrated seam showing. Mellencamp manages to sound simultaneously less accomplished and less weather-beaten. He also sounds like he’s been around for less time. You can hear that the Lost Dog Street Band is contemporaries of folk/country/rock No Depression peers like Jason Isbell. But their music is also so much theirs that it feels like they’ve lived in it forever. That’s most true on the album highlight, “End With You,” a love song from the band to itself, and from Tod to Mae. “If you’ll still have this old fool,” he sings, while she joins in with perfect, muted harmony, “I’m so damn glad I’ll end with you.” The joy feels hard-won, sawed out of despair. Finding your own voice, like finding your own love, takes a toll.

“Do I have what it takes to make it somehow?” Todd sings on “What Keeps Me Up Now,” with a quiet vulnerability that indicates he’s aware that the answer, at least on the scale of Mellencamp success, is almost certainly, “no.” Lost Dog Street Band isn’t likely to ever have a hit, given pop culture’s current genre preferences. But Glory finds such grace and glory in bad luck that you feel sorry for performers with more success and less soul.