Sonny Rollins’ Way Out West and the joy of Western bop. 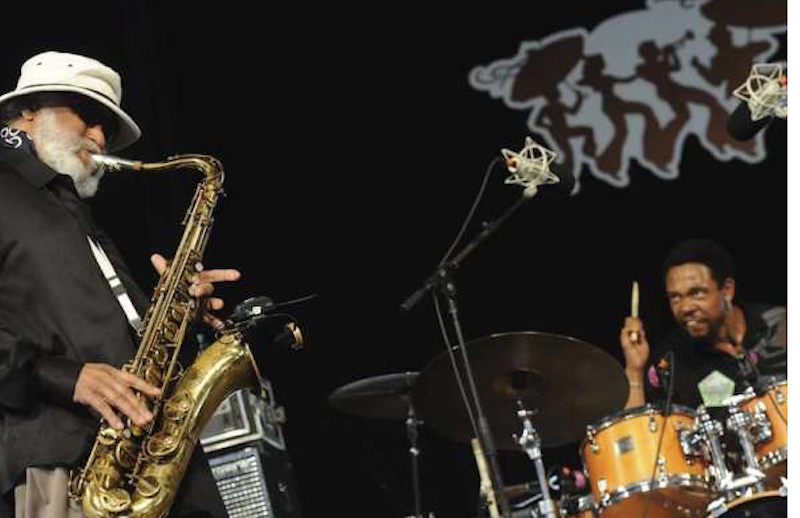 Sonny Rollins’ 1957 classic Way Out West has one of the all-time great album covers. Photographed by William Claxton, Rollins stands in a dry brush landscape. A cow skull’s behind him, a Stetson’s on his head, and a gunbelt’s at his hip. His saxophone is slung at his side like a long six-shooter. He leans back, legs apart, ready to blast you with some cowboy jazz.

Cowboy jazz isn’t a completely incongruous concept. Western swing outfits like Bob Wills and the Texas Playboys mixed up cowboy iconography, country fiddles, and big-band arrangements through the 1930s and 40s. Those performers were all white. When Black performers from James Brown to Beyoncé have performed country tunes for country audiences, they’ve consistently been met with hostility and racist resentment—with very occasional exceptions like Charley Pride and Darius Rucker. Rollins is putting on a hat that people like him weren’t supposed to in 1950s-America. It’s a provocation and a joke.

It’s not just a provocation and a joke though, as Rollins makes clear on the amazing opening track, a rendition of Johnny Mercer’s “I’m An Old Cowhand.” There’s no singer, but Rollins was surely familiar with the lyrics, which are about the distance between Hollywood cowboys and the real thing.

What better cowboy tune for a non-cowboy to perform than a cowboy tune about not being a cowboy? Drummer Shelly Manne kicks it off with a tongue-in-cheek clippety-clop beat. But when Rollins comes in, his big, smooth tone rides so easy it turns big-screen corn to shoulder-shrugging sage-brush cool. When he breaks up the melody with high squeaks and technical virtuoso low grunts, he comes across like the missing link between the yodel and Ornette Coleman, while Ray Brown’s bass solo, accompanied by almost inaudible scat vocalizing, ushers you into a smoky club on the prairie. The gag is that it’s too sublime to be a gag. Rollins pulled on that Stetson for dress up and then found out it, and the landscape, were just his size.

The stunning 10-minute version of “Wagon Wheels” has a similar spacious ease. On the opening melody, you can hear that saxophone reed, tough and thick, miraculously smooth out as the rhythm section clops across the hills. He’s taming the herd so thoroughly he can swagger over and wander around among the bulls, throwing in full rests and then snorting out breakneck runs. There’s no rush; the wheels turn as fast or as slow as he wants them to.

The final country nod is album closer “Way Out West,” written by Rollins, but to my ears at least with a tip to the melody of “They Call The Wind Mariah.” Ray Brown’s bass gets a lot of space as Rollins flutters and swoops up above, like some desert bird catching a dexterous updraft.

Rollins also turns his horn loose on a few standard jazz ballads. “Solitude” is bluesy and deep, with each delicately-twisted exploration digging in harder to the late-night melancholy. “There Is No Greater Love” has a bit of that old cowboy roll. The uptempo Rollin-penned “Come, Gone” with its long, intricate head doesn’t; it’s the track that most harks back to Parker/Gillespie bop, all jittery uppers, salt peanuts, and no chill.

I love the Western songs so much that I wish there was an entire album-full of them a la Ray Charles’ Modern Sounds in Country and Western Music, which came out a few years after Rollins’ pioneering fusion. What could Rollins do with one of those classic Wills tunes like “Faded Love” or a Bob Nolan classic like “Cool Water”?

But there’s a marketing logic to giving the serious jazz-heads what they want—and a thematic logic too. Rollins went way out West, but he didn’t stop being Rollins. He doesn’t have to be someone different to be that old cowhand, whether on the Rio Grande or in Hollywood, or leaping over the distance between the two. It’s his country after all. Every note belongs to him, and the wide open spaces in between.