The first in a series on the low tide of rock music in the 2010s. 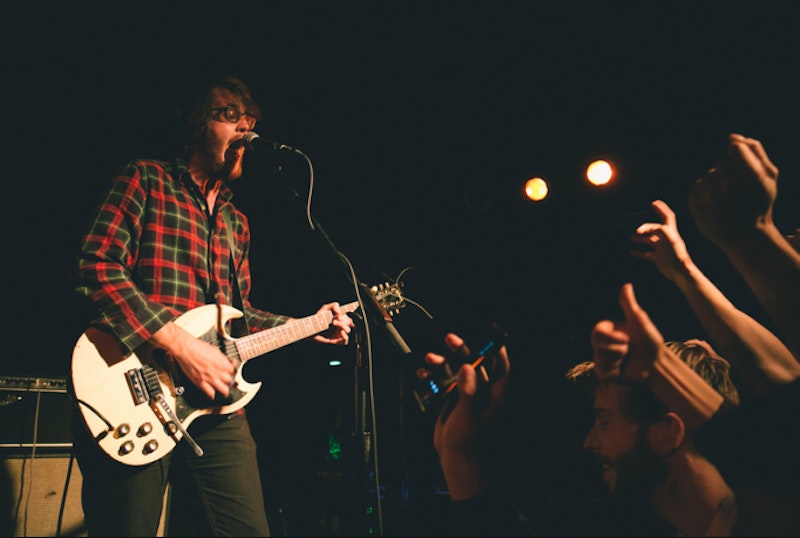 What is Retail Rock? Should you care? Is it the death of something? Is it destroying rock music? No: it just means that we’re at low tide. “Rock is dead” was the mantra in the late-1980s up until 1991 when Nirvana allowed for a handful of great alternative rock bands to rise to mainstream attention along with hundreds of other mediocre and crummy copycat bands that are lost to moldy basements and one-dollar used CD bins (For Squirrels, Sixpence None the Richer, Marcy’s Playground, Silverchair). The alt-rock hangover lasted long after Kurt Cobain died, and by the turn of the millennium, rock’s reigning kings had DJ’s, impossibly down-tuned guitars, and bad attitudes, aggression with none of the reflection that makes Nirvana’s music resonate so many years after they ceased to exist. Through the 2000s, pop and Stock Rock (Foo Fighters, Muse, Kings of Leon) ruled through the compact disc’s final era of relevance, and now we’re left with almost no rock bands that can fill arenas, let alone stadiums, that weren’t around in the eighties. Fuck U2—where’s our U2?

Then again, does our generation need a U2? For a while in the first decade of the 21st century, the new American underground was plenty inspirational. Bands like Lightning Bolt, Black Dice, Deerhoof, Oxes, Animal Collective, Arab on Radar, Ponytail, Battles, Ex-Models, Liars, and the Magik Markers inverted the instrumentation and set-ups of rock bands and carved a path for what looked like a long, new and interesting future for what you could do with guitars and drums. It sounds silly now, but before I saw Animal Collective, I never thought you could just play without a bass drum, or send drums through delay pedals, or instead of having a bassist, have a sound manipulator with a table full of pedals instead. Similarly, watching what Greg Saunier of Deerhoof and Brian Chippendale of Lightning Bolt could do with so few pieces in their drum kits was inspiring—they were master players, and clear examples of the “You must learn the rules before you can break them” idiom. Although they’d all been honing their craft and aesthetic for years before I ever encountered them, these bands were fully-formed and separate from any kind of “mothership” band—there were no copycats (at first). Dan Deacon came along shortly after, and his Wham City collective coined the term “Future Shock” to describe the deconstructionist new wave of artists like himself and Ecstatic Sunshine, who played with the semiotics of traditional rock song form and performance into something wholly original. Ecstatic Sunshine in its original form was just two guys playing clean electric guitars through small practice amps, and if you listen to their 2006 debut Freckle Wars, there’s never a point where you’re begging for a bass player or a drummer to fill in the empty space. There isn’t any.

The wave crested with Animal Collective’s Merriweather Post Pavilion in 2009, and the final Whartscape festival in Baltimore in July 2010. It was such a bummer at the time, but Deacon’s decision to end Whartscape at its peak was prescient, because this decade has produced nothing nearly as exciting as what went down in the American noise and experimental underground in the aughts. There are some new killer bands that exist in their own universe—Guerilla Toss, Horse Lords, Spray Paint, Daniel Lopatin’s Oneohtrix Point Never (who played the last set on the last night of the last Whartscape). But mostly, innovation and cultural relevance has ceded to electronic music and hip-hop. Grimes is the most influential indie artist of the decade so far, while rock music has slid down a steep hill into bad shoegaze imitators (DIIV), shameless revivalists (Parquet Courts, Cloud Nothings, Sleigh Bells, Wavves, Best Coast) and yacht rock impressionists (Mac DeMarco, Porches). And the endless, insufferable Pavement wannabes (Speedy Ortiz, Alex G, and an overwhelming number of bands coming out of Massachusetts). Some of these artists can be pretty good—I loved DeMarco’s Another One last year, and he’s a skilled producer with some really interesting guitar sounds. Same goes for Parquet Courts. They’ve written a handful of fantastic songs (especially “Borrowed Time,” “Everyday It Starts,” and “Steady on My Mind”), but they’re all icing—as I wrote a couple of weeks ago, everything about them is interesting except the music.

What makes Retail Rock? Well, if it works as background music in a mall or a Vans commercial, that’s Retail Rock. It’s non-offensive indie rock that might as well be muzak, because it isn’t catalyzing a new generation of kids inspired to form their own bands and take what they’ve learned and start their own future. It’s creating third, fourth, and fifth wave Pavement clones, just as the 90s and early aughts saw fifth-wave grunge acts like Puddle of Mudd and Staind sell millions of records with painful Cobain impressions. Rock is at low tide because its current kings aren’t interested in inverting the form or playing with semiotics or throwing traditional instrumentation out the window. I love what Grimes, Arca, Matmos, and Oneohtrix Point Never are doing, and how they’re always one step ahead of everyone else, but as a student of rock history and a lover of rock tropes and song form, I want to see more bands like Animal Collective circa Feels and Deerhoof and Ecstatic Sunshine and Double Dagger pushing forward into the 21st century with new ideas and sounds. Retail Rock is, at its best, just nice—a good song here or there. At its worst, it’s a living death—I listen to Cloud Nothings and want to jump out a window, or buy a sampler. Steve Albini? Stephen Malkmus? Jonathan Richman? Fuck them: they’re spent. None are worthy of worship in the era of Retail Rock, but if all goes according to plan, that wave is set to crest soon, too, and something new will come along.