Joey Ramone Gets His Wish 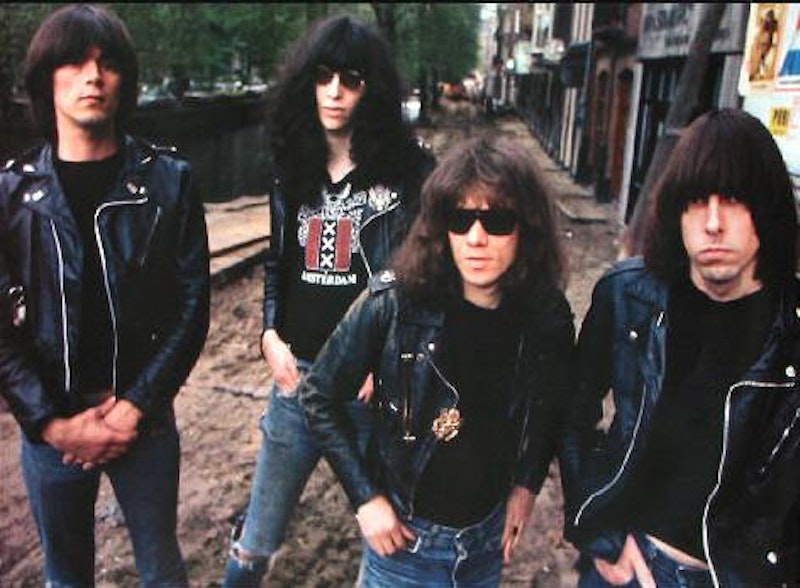 “I wanna be on the cover of Rolling Stone, ya know,” Joey Ramone explained to me one night in front of CBGB, the punk rock dive bar on Manhattan’s Lower East Side that started it all.

“I think my mom would really get a kick out it,” he continued. I just nodded my head. “I mean, ya see some of these jerks who haven’t done anything, and then there’s us. Almost 20 years of touring and tons of albums, and they put fucking Madonna on there for the zillionth time.”

I told my friend I agreed, and then joked by singing that Dr. Hook song about how “I Wanna Get My Picture on the Cover of the Rolling Stone.” Joey didn’t laugh. I was thinking about all of this the other day as I stood in line at the local supermarket, one Johnny used to go to, and there they were, on the cover of Rolling Stone. The photo was a shot very much like the one on the first album. Actually, probably from the same roll.

This year is the 40th anniversary of the release of their first album, Ramones, and it’s seems quite the big deal. The other morning, Johnny’s widow, Linda, looking loopy as ever, talked about it on Fox 5 while wearing a pink cape and a tiara. She explained how Johnny couldn’t really get any other job because “affirmative action” took her husband’s construction job away. I had to laugh at the silly Queen’s sincerity of it all. And that’s what the Ramones were. Sincere. And yes, silly.

Then there was the big art opening at the Queens Museum on Sunday, where all sorts of nobodies and anybodies with everybodies posed for the media, and explained how they knew them way back when—and knew they would become some American equivalent to The Beatles. And like Rolling Stone, most of them were full of shit.

When I first saw the cover of the magazine, I thought I was seeing things. Naw. There was no way they were ever gonna put The Johnny Appleseeds of Rock 'n' Roll on the cover. Never mind the fact that everywhere the band would play, many other new bands would pop up within weeks. All over the world. That’s how influential they were. There was no way they were going to put the band that was the blueprint for all modern rock and metal on their cover. Then I remembered something. My friends, The Ramones, they’re all dead.

Of course fucking Rolling Stone would put them on the cover now. It was safe. Just the way Jann Wenner and company always played it. Well, almost. When Rolling Stone started in 1967, it was more of a hippie fanzine that really cared about the rock acts it covered as well as the culture surrounding it. But I knew it was over some years later, when this same magazine that spoke of spiritual rock ‘n’ roll world peace and unity, began running ads for the U.S. Army. Then other wings of the Military Industrial Complex. Nice.

Teach the kids about peace and love, and then tell them to go die for some bullshit cause. Rolling Stone had come a long way since Vietnam. Anyway, with The Ramones all dead, there was no threat of any of the band members grabbing a knife and stabbing a writer or something. This is how those pussies thought.

My friend, and bass player for Iron Prostate, passed away last year. His name was Chuck, but many knew him as Rolling Stone’s “Rev. Charles M. Young.” We became good friends after he wrote a story in the mid-'80s for Spin about a band I was in, False Prophets. First Chuck played with me in The George Tabb Experience, then we started Iron Prostate together along with a bald Scot Weiss, ex-singer of Ed Gein’s Car, a legendary New York City punk outfit.

It was Chuck who told me all about his buddies at Rolling Stone having a band called The Dry Heaves. They played punk as a goof with other writers from the magazine at the time. They even had John Belushi sit in on drums. When I had Chuck join my bands years later, he learned that being a goof, being funny, is very hard work. I don’t think he liked it very much, but he did enjoy penning and recording “Bring Me the Head of Jerry Garcia” along with me as well as some other fun tunes.

Chuck was the guy who “broke punk rock” in the United States. Or so I hear from everyone. He did the first big article about punk in the United States and put The Sex Pistols on the cover. Which was a slap in the face to all those who worked so tirelessly to create it. But I suppose Jann Wenner thought lead singers dressed as clowns, and half-dead bass players were in. I’m sure he didn’t even know that these guys existed because of The Ramones.

As the years went on, and Rolling Stone put Green Day and Blink 182 on the cover, it must have eaten away at the souls of those four horsemen of teenage salvation from Queens. Here they were, the guys who created it, and there was everyone else, actually profiting from it. But I guess it’s like what they say, "Always be the second one through the door." Ignore the Trailblazer. At least that’s what Rolling Stone does. Actually, I’m glad they’re on the cover now, and not within the last nine or so years. It would’ve killed Joey’s mom to see him there, knowing he really wanted it just for her. And Tommy Ramone, who recently passed away, seeing something his poor lead singer wanted so much.

It was bad enough that Joey had succumbed to lymphoma right before they got into the Rock ‘n’ Roll Hall of Fame. So, a hearty fuck you to Rolling Stone for its lack of backbone, taste, and over-all heartlessness for their most recent assault on the American public and fans of The Ramones. And congratulations, boys: After you died, you got on more soundtracks and car commercials than you’ll ever know. The money did flow in after you died. And you got your picture on the cover of Rolling Stone. Which these days is less important than a “tweet” from a B-list celebrity like Madonna.