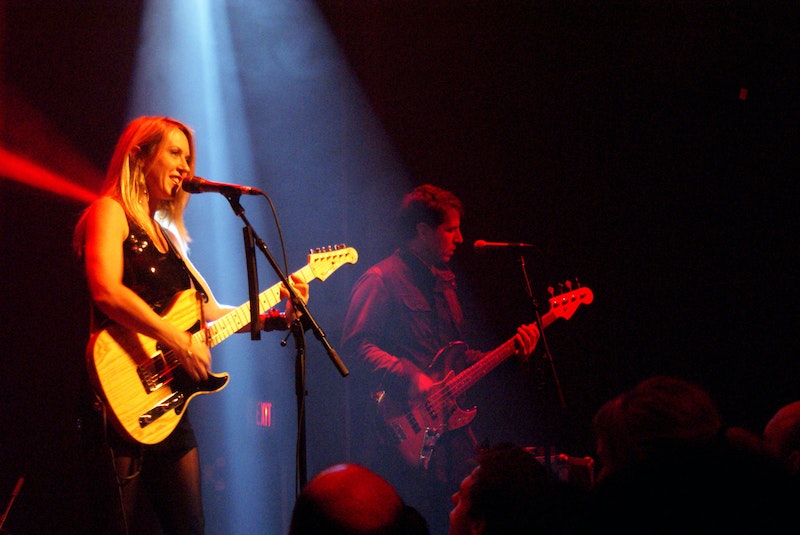 Kirby Kager (Emilio Estevez), Dale Biberman (Andie MacDowell), and Dale’s roommate were standing around in Dale’s apartment, discussing Dale’s assorted imperfections. The movie was 1985’s St. Elmo’s Fire, remembered today for being dated and awful—yet that particular scene was important, because it insisted, gently, that beautiful, successful women aren’t goddesses. Beautiful, successful women are as human and fallible as anyone else, a point that Estevez’s character—a stalker, essentially, who didn’t escalate to a truly dangerous level—never quite grasps.Twenty or 25 years later, St. Elmo’s Fire probably would have needed to end the way Enough did, but in 1985, the script didn’t bother to force Kager to grow up, with Biberman remaining an improbable good sport, an unruffled, unattainable object of affection.

Eighteen years later, Liz Phair was not Dale Biberman. Phair was a seasoned songwriter, indie-world darling, and stage-shy performer who found herself in an unusual position: she longed to go full-on pop, and gone part-way there on 1998’s whitechocolatespaceegg. So it seemed fitting that 2003’s Liz Phair opened with “Extraordinary," an honest-to-God rock ’n’ roll anthem both bigger and bolder than prior, amplified singles like “Supernova” and “Johnny Feelgood.” The song felt then—and still feels—humongous, with then-hot production team The Matrix polishing its massed, thunderous guitars to an FM-radio sheen. It was the courting of a potential new audience, Attack of the 50-Foot Woman as thrown gauntlet, and Phair staring down haters as she approached a new phase of her career.

Oh, were you a twentysomething dude insisting that Phair spend the rest of her life recording lo-fi, sexually adventurous songs? Fuck you. Thought her persona was forever preserved in amber, existing solely to serve as your private masturbation fodder? Fuck you. Crying sellout and still bemoaning the loss of Matador Records’ “All Rights Reserved, All Wrongs Reversed” imprimatur? Fuck you. Have no clue what it feels like to lay your personal, creative work on the line for a world of jackals, and zero empathy for anybody who does? Fuck you. All this ire seethes between passive-aggressive, sweet ’n’ sour lyrical lines that reveal an artist equally willing to admonish and court a wavering fanbase. And there’s the strong suggesting, in “Extraordinary,” that Phair’s singing over the heads of bros who got off on Exile in Guyville and Whip-Smart to their sisters and girlfriends—women who yearn to be respected, desired, and strong in a man’s world primed to forever objectify and subjugate them. It’s thrilling to hear her sack and shock the city; it sucks to remember that not enough people were listening, that she’d never quite reclaim the soapbox.