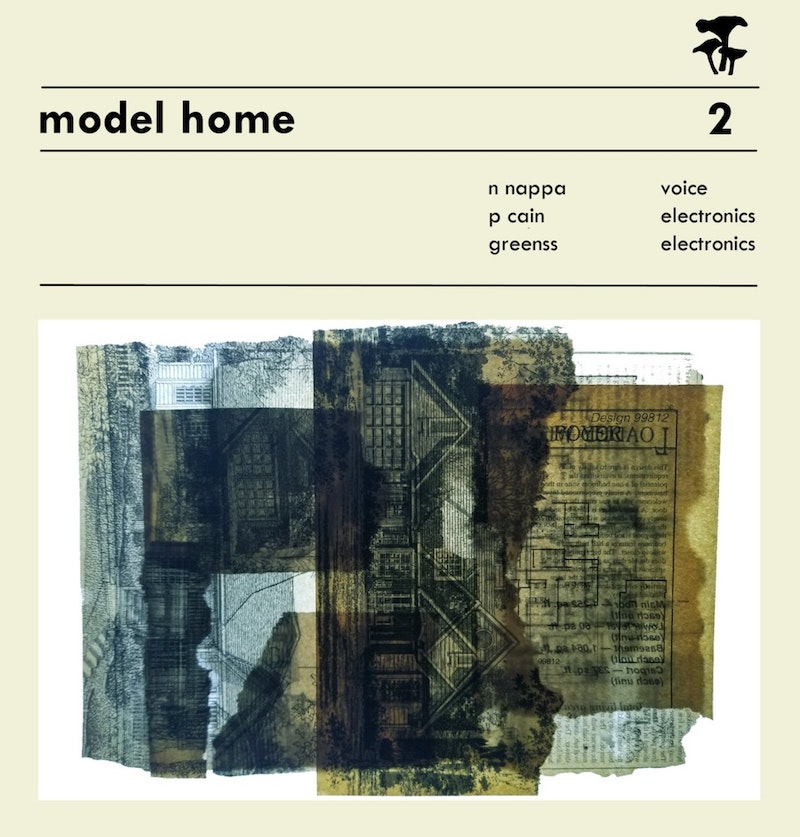 On a post-Western prefab stage set, its designer glued plastic fruit to the unpainted shelves visible through the polycarbonate windows squared to the right of a door never meant to be opened. As a kid, peering around the corner into the emptiness and sky behind the main street’s storefront façade was nothing short of magic.

William Harnett too. I imagined “still life,” the skulls and violins embalmed in his oil paintings, to be suspended in kinetic stasis, a realm of unseen animation only activated after death.

Followed by the model home, which will never house long-term life but demonstrates one way to live. Presenting one groomed option, the model home opens the door for infinite possibilities. Plastic fruit feeds the imagination.

Nappy Nappa and Pat Cain, as Model Home, start at the beginning of magic, peering around the corner of the false front, into the true electrical charge of a big sky. Out there, they reanimate the dead wood and dry skulls into new life, replacing deceptive frameworks with sincere abstractions.

Model Home is for “the future to create new pathways of communication through the power of sound and improvised free collaboration,” producer Cain says, adding that they’re “trying to just keep spreading the word and bring a mentality of freedom and pure expression to the world.”

Stationed in D.C., they pulse outward through fast radio bursts, forming chondrites from hardstone dust of noise, rhymes and rhythm. In the moment, they create “in accordance of divine and just harmony with new or non-conventional sounds to push the good people’s minds, souls, ears, hearts and hips,” vocalist Nappa says.

In no time at all, Model Home has produced an operative discography of open-book esoterica through capture and selection of blissful frenzy inherent in present-tense action. Six digital albums deep (titled 1 through 6) within the span of one calendar year, Nappa and Cain have now committed their first mind meld of galvanized hot dips and flash-butt welds to vinyl. On it, they don’t stand on the periphery but spin in the sparks with an unstable steadiness, while flashes of light smear past like speeding cars on an interstate carousel.

“Fake Feet” follows with a little less blowout but equally elliptical woolgathering. Nappa’s repeat phrases leap into Cain’s processor, which chops and grinds them into tremulous warbles pitched up and down. “Like They Du” sets the stage for the drama of confusion where Rammellzee holds Severed Heads like Macbeth.

The source of heat and the heart of the matter is “Tuu Shiny,” a new sensation that delivers the payload. Cain’s arrhythmic throbs hyperventilate, sputter and then stall. In the suction, Nappa entreats, “Take a sip of the water,” which comes through clean before spiraling down into a deep pit swirl around the perimeter of a bottomless mine. Helicopter blades cut at peak, splitting the difference between bewilderment and balance.

Visuals enhance the floor plan. Their collaged album covers spoof the sterile view of life from the outside looking in, while their music videos increase the turbulence of rhythmic rapids, like in “Center uv the World Swing,” where the perpetual bend of solarized hand-held complements the track’s dissecting skip and shuffle. An overlay of abstract surface blooms over home video style footage as tourists Nappa and Cain visit towering columns while locked in a constant stream of a turbidity current coursing against the grain.

centeruvtheworldswing from Patrick Cain on Vimeo.