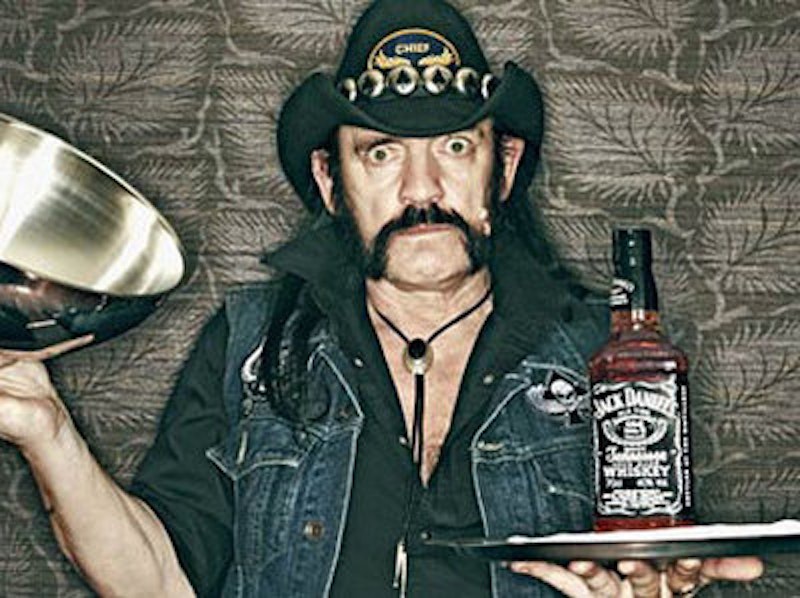 Lemmy Kilmister and David Bowie died within two weeks of each other. Their deaths, Bowie's in particular, prompted an online mourning process that lasted the entire month of January. It was unreal, and still is. People who cure diseases don't get that kind of sendoff.

It wasn't just the musicians who were mourned; it was what they represented. Bowie and Lemmy appealed to two very different groups of people, but they each defined “cool” to their respective groups. They guided awkward, misunderstood teenagers and young adults and, as all good art does, made them feel less alone.

On the surface, the two men couldn't be more different. Bowie was a slim, handsome, critically acclaimed pop sensation who changed his persona every few years, whereas Lemmy was a churlish, trend-resistant journeyman who looked like one of those German holiday monsters invented to scare children. Bowie was an innovator who chased (and often outpaced) cultural relevance, whereas Lemmy didn't care about relevance at all, and was outright hostile to it. Bowie's wild lifestyle settled into what was by all accounts a healthy, loving relationship with his wife Iman, whereas Lemmy lived by himself in a rent-controlled apartment, never married, and only stopped partying when his body could no longer bear it.

Upon closer inspection, similarities begin to emerge. Both men were British. They enjoyed long careers, made dozens of albums' worth of great music, and built their own brands of individuality from what most would’ve considered flaws. Their appetite for drugs and groupies were insatiable in their respective primes (and in Lemmy's case, for decades afterward). Neither man's closet is free of skeletons, either; Bowie took the virginity of a 15-year-old groupie when he was in his 30s, and Lemmy was an unapologetic collector of Nazi memorabilia.

I was more affected by Lemmy's death. That's not a knock on Bowie, but his life and career have been fully examined multiple times. Lemmy, on the other hand, is still underrated as a songwriter and musician, and his refusal to compromise remains hugely inspirational to me. When people eulogize Lemmy in the press, they don't venture much beyond “Ace of Spades” and his impressive intake of drugs, booze, and sex, which is a shame. Lemmy basically had Spinal Tap's entire career, starting off in a British Invasion-era band, then a hippie band, before setting down permanent roots in a heavy metal band. It's a feat that’s pretty much impossible today, and is just as impressive as Bowie's many accomplishments.

Lemmy's music career began in 1965, playing guitar for the Rockin' Vickers, who toured Northern England and mainland Europe, and were known for their goofy stage outfits and intense live shows. They were also the first British band to play in then-socialist Yugoslavia. After the Vickers broke up, Lemmy roadied for Jimi Hendrix, before joining the progressive rock band Hawkwind in 1971. His bass technique shaped the band's overall sound at that time, and he was the vocalist for their highest-charting UK single, “Silver Machine.”

Lemmy was fired from Hawkwind after getting popped for drug possession at the US/Canadian border, and formed Motorhead (originally named “Bastard”) in 1975. The typical joke about Motorhead is that they wrote “Ace of Spades” and a bunch of other songs that sound just like it, but that underestimates songs like “Whorehouse Blues,” “Damage Case,” “The Chase Is Better Than the Catch,” “Going to Brazil” and “I Am The Sword.” In fact, I'd say Lemmy was one of rock 'n’ roll's most underappreciated lyricists. Motorhead songs were always sharp and confident, and often clever, as were those he wrote for others, including Lita Ford, Slash, Girlschool, and Ozzy Osbourne. I'd put the lyrics for “Mama, I'm Coming Home” up against anything Bowie wrote.

Lemmy led Motorhead for 40 years, and their relentlessness, both musically and professionally, was incredible to behold. Unlike other aging rock bands, Motorhead kept a grueling tour schedule that even James Brown would have second-guessed, only taking breaks from the road to write and record new albums. To put this in context, pop stars in their early-to-mid-20s burn out from touring all the time, not because they're weak, but because living like a pirate is an insane existence. You're in a different town every night where you don't know anyone, perpetually exhausted, and you usually have just enough money to get yourself into trouble.

As another example, Conan O'Brien's single live comedy tour (documented in the film Conan O'Brien Can't Stop) nearly killed him, even as it renewed his passion for comedy. As the film progresses, you can see him burning out, and he recognizes it. Near the end of the film, he says that he could see “the sickness of it,” and that “[it] needs to stop pretty soon.” Even Bowie, no lightweight when it came to life on the road, had to stop and regroup between phases, and his touring schedule slowed down considerably as he got older.

Lemmy, meanwhile, continued well past the age where normal people are applying for AARP memberships. And for all the talk about his drinking and speed use on tour, Lemmy never unintentionally said or did anything stupid (unlike Bowie, who made some Phil Anselmo-esque blunders at the height of his cocaine abuse), and was never too incapacitated to perform in his heyday. Whether that's grit or luck, I can't say, but it's almost miraculous given his proclivities. And through it all, his aesthetics and demeanor—gruff, honest, strangely articulate—never changed, and his talents never diminished.

While Motorhead's decades of hard work never brought them huge success in America, the respect they earned from their peers made ripples in the greater pop cultural landscape. They were also blessed with some of rock music's most devoted fans. When Lemmy had to cut a Salt Lake City performance short after four songs due to health concerns, his onstage apology was met not with frustration or sadness, but unanimous empathy from fans that felt that he didn't owe them anything.

That, I think, is what Lemmy's media remembrances don't focus on enough. Forget the speed, Jack Daniels and video poker addiction, Lemmy's legacy can be found in his music. He made loud, simple, straightforward rock 'n’ roll in such a way that people could find themselves in it, and once they did, they were never turned away. Bowie did the same thing with his body of work and onstage persona, and gets a lot of much-deserved credit for it, but Lemmy doesn't. Not often enough, anyway.

Although Lemmy's death hit me hard, it didn't make me sad. Neither did Bowie's. Sadness would imply a tragedy that wasn't present in either man. They both lived relatively long, full lives and made records that have stood the test of time. Though they represented two halves of an era in art and music that’s largely gone, they also stand as proof that it existed at all, and that it may return someday. I do feel lucky that I was around while they were still alive and making music, and that they left so much cool stuff behind for me to explore.