A night I almost walked out of a Dylan show. 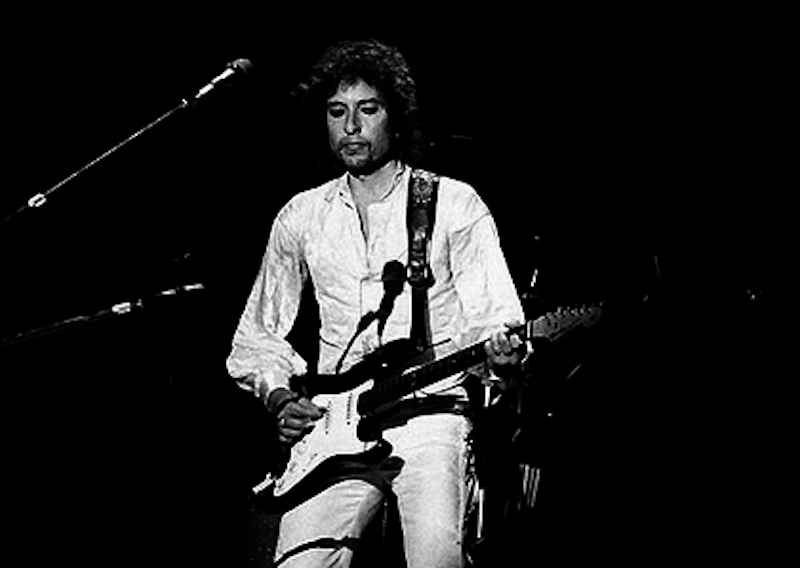 I just finished Dennis McDougal’s 555-page Dylan: The Biography, which came out in May, and there’s little to recommend it. Granted, the number of bios/analyses of Dylan is innumerable, and so anyone embarking on another such book, especially one so grandiosely titled, better have something—anything—unique to say. McDougal doesn’t even come close. It’s a nasty tome, focusing on salacious gossip and re-treads of Dylan’s various appropriations of melodies and lyrics, as well as a thorough trashing of his 2004 Chronicles, Vol. 1, which I found to be a fascinating read, whether it was filled with fibs and cribbing from obvious and obscure sources or not. Anyone who took Chronicles at face value was an innocent: of course Dylan shaded the truth, or outright distorted it, whether out of a lifelong penchant for mischief or to provide a bit more oomph.

McDougal’s obsessed with the number of women Dylan slept with, how many wives he’s had and illegitimate children he’s sired, drug use at different points in his long career, feuds with other musicians, greed, his middle-class Jewish Minnesota upbringing, the mendacity of onetime manager Albert Grossman, and his failure as a filmmaker. He spends pages and pages on the rocky end to Dylan’s marriage to Sara Lowndes and repeats for perhaps the 115th time Dylan’s cruelty to early competitor Phil Ochs and his use and abuse of Joan Baez. Meanwhile, he breezes through the actual recording and impact of Dylan’s albums from the 1960s, as if they were a footnote to the story of an especially cretinous rogue. There are great Dylan books I’d recommend to anyone delving into the subject for the first time—in particular, Greil Marcus’ Like a Rolling Stone: Bob Dylan at the Crossroads and Invisible Republic: Bob Dylan’s Basement Tapes, as well as Chronicles—but McDougal’s book is a stinker. (A better new Dylan piece, by Bill Wyman was recently published in New York).

If it was the author’s intention to shock readers he fell short. Personally, when it was revealed in the spring of 1977 in the finalization of Dylan’s exorbitant divorce settlement that he beat up Sara, I was, at 21, horrified, and after a week or so of scratching my head, settled on the rationalization that you have to separate an artist’s work from his or her personal life. All the dirt that came out after that was lint on my jacket, easily brushed away.

Inadvertently, McDougal did remind me of when I stopped taking Dylan’s live performances seriously. I was too young to see him prior to his cessation of touring in the summer of ’66, but did attend his “comeback tour” with the Band in ‘74—mildly disappointing after the build-up since Dylan rushed through his songs, shouting the lyrics—and the finale to his East Coast “Rolling Thunder” carnival at Madison Square Garden on December 8th of ’75. That five-hour show was fabulous, with a more calm Dylan taking time with his classics and new tunes, and surrounded by the likes of Joni Mitchell, Mick Ronson, Ramblin’ Jack Elliott, Robbie Robertson, Scarlett Rivera, Roger McGuinn, Baez, Ronee Blakley and any number of others I’ve forgotten at this point.

One day in the late summer of ’78, I was reading The Baltimore Sun and a full-page ad appeared announcing Dylan’s Oct. 4th show at the Civic Center. Excited—even though I wasn’t a fan of his latest release Street Legal, save the nonsensical but catchy “Changing of the Guards”—I bought tickets when they went on sale, and later received press passes in the fifth row. I gave the extra tix to City Paper friends and the lot of us went to the show.

The concert was abysmal. McDougal does get this right: “Dressed more like a lounge lizard than a late-model hippie, [Dylan] swapped Rolling Thunder’s blue denim for black leather jacket, white penny loafers, and tight white trousers.” Dylan looked like he was aping Neil Diamond, late-era Elvis or Barry Manilow in a Vegas-like switching of costumes, an irritating female chorus backing him and an odd, new voice. I’ve never had problems identifying his songs after the intro—even at a 2012 show in D.C. I took my sons to so they could see the living legend—but that didn’t mean I liked it. He opened with “My Back Pages,” which was okay, but after the sixth song, “Tangled Up in Blue,” in which Dylan recited the lyrics like a cantor, I got fidgety. After a mangled “Maggie’s Farm,” I left the prime seats and went to visit my buddies in the balcony, who were also seriously disappointed. We chatted throughout the rest of the 27-song set, and I almost walked out. It was only because we had plans after the concert that I stayed put.

Unlike a lot of Dylan’s rabid fans, I never warmed to the Christian albums, the bleak releases from the 1980s or, actually, anything he’s recorded since, save the goofy, but fun, Christmas album from 2009. His radio show is tops, and the CD/DVD No Direction Home—in which he spoke clearly, obviously wanting to put his stamp on his legacy before croaking—was great.

That said, no complaints from me: Dylan’s work in the 1960s and half of the 70s cemented his status as the country’s most accomplished rock/pop figure and that’s worth remembering when the 73-year-old Dylan wobbles on stage or accepts salutations from President Obama.