Nicki Minaj and Lana Del Rey Are Watching You

The furor is intentional. 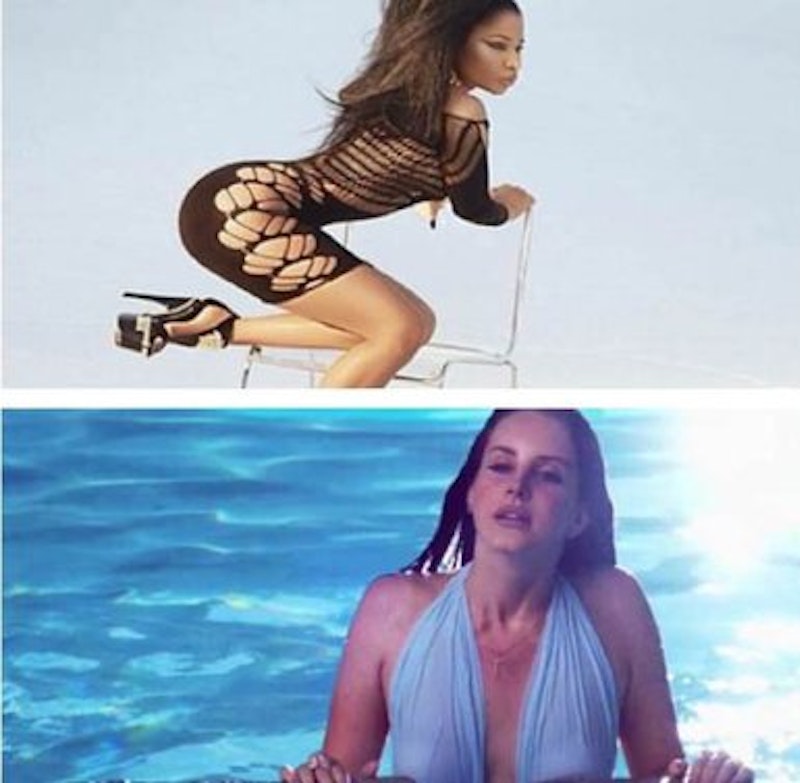 Sex sells. It's a banal truth that relies on its perennial shock value for its perennial relevance. Nicki Minaj plays the game as well as anyone, and her be-thonged rear-view photo for single "Anaconda" has set off a round of censorious finger-waving that has reached from mainstream sites to smaller outlets. These in turn spurred the inevitable pro-Minaj think pieces, all further broadcasting and amplifying the initial bill of sale—which, in case you missed it, is sex.

The furor is intentional. Minaj's look over the shoulder in that "Anaconda" image makes it clear who’s in charge of the display, and the insouciant Air Jordans declare upfront that it's an exercise in branding. Furthermore, Minaj already addressed the issue directly earlier this year with pointedly named track "Lookin' Ass." The black and white video features Minaj strutting, stroking, and straining her curves against a skin-tight semi-transparent wisp of nothing, the camera switching back and forth between her body and an extreme close-up of a man's hungrily tensing eyes.

If Minaj is soliciting a male look in "Lookin' Ass," though, she's also rejecting it. "Look at y'all lookin' ass niggas/Stop lookin' at my ass ass niggas," she spits. The rap is a series of insults, telling the guy in the video who's looking at her, and the guys watching the video who are looking at her, that they're not good enough. "No dick in the pants ass nigga/I be damned if I fuck a non-man ass nigga/I will, I will, I will, I will never fuck a non-man ass nigga," she declares, and, even more pointedly, "I'm rapin' these niggas" before she pulls out two massive machine guns. We shift from a male eye to a male mouth silently screaming "no," and then Minaj pulls the triggers as (presumably) off-screen carnage/castration ensues. Minaj turns the rap video honey meme into femme fatale terrorist—if she's going to be a commodity, that will provide men (and women too) with the masochistic dream of being emotionally and physically tormented by a dominatrix. She may be caught by the gaze, but the gaze is also how she gets you.

In response to the scandal caused by her "Anaconda" image, Minaj tweeted a number of similar images of white women, noting acidly that white women's rears were "acceptable" while hers was not. She's not wrong about the double standard, but still, standards for white women can also be quite limiting as well, which is why female pop stars also address, or reverse, or struggle with, the ubiquitous audience of men looking.

Lana Del Rey's "Shades of Cool," released earlier this year, features, like Minaj's video, extreme close-ups of male eyes. In fact, the video opens with us looking into the weathered, blinking, intense eyes of tattoo artist Mark Mahoney. And, as in Minaj's video, the female performer's body is what’s looked at. In one scene, Mahoney is sitting clothed, looking through an observation window as Del Rey swims by languorously. In another, he sips wine as she does a carefree manic pixie dream girl dance in their hotel room and eats a strawberry. Del Rey is the visually alluring object of desire—though, as with Minaj, the lyrics work to turn that around, at least to some degree. "My baby lives in shades of blue/Blue eyes and jazz and attitude/He lives in California too/He drives a Chevy Malibu." Mahoney's a dangerous, distant, broken romantic fetish, just as Del Rey is a sun-dappled romantic confection. The image of Mahoney's eyes cues us to gaze at Del Rey, but the close-up is also a sexualized gaze at his gaze; his knowing, ravaged look, buying the sex she's selling, is selling sex itself.

There are differences between "Lookin' Ass" and "Shade of Cool,” and they’re just as obviously linked to race. Just for starters, "manic pixie dream girl" is a white trope; as Tami Winfrey Harris pointed out at Racialicious a while back, "The wide-eyed, girlish, take-care-of-me characters that… are not open to many women of color, particularly black women." Similarly Del Rey's retro vision (a shot of her lusciously coming out of the pool is supposed to reference Marilyn Monroe) channels a decadent nostalgia for a Golden Age that had little space on-screen for black people. The video figures Del Rey herself as a kind of sophisticated furnishing; you have your pool, you have your white women, and the result is Hollywood glamour.

Minaj, on the other hand, is working off of stereotypes of hyper-sexualized black women—but also off of a competing/complimentary image of black women as hyperbolically tough. Feminista Jones has pointed out that there’s a "perception that black women can't really be harmed, that we don't experience pain, that our feelings can't be hurt." I prefer Minaj's video to Del Rey's on just about every level, but that doesn't change the fact that her persona of lascivious untouchable ball-breaker isn't necessarily any less tied to stereotype than Del Rey's self-positioning as sparkling bauble adorning male psychodrama.

The point is not that these artists have somehow failed feminism and/or good taste and/or artistic integrity. Rather, the point is that, once more, sex sells, and that in the economy of pop, sex insistently, consistently, equals female bodies. Minaj and Del Rey are being watched. That watching involves desire, but it also involves censure, whether in the form of people expressing shock and horror at the scandal of black sexuality, or people expressing disgust and contempt at Del Rey's plastic surgery and self-packaging as artificial meme. In fact, the censure and desire go together, building on and magnifying each other. That's why Minaj and Del Rey both force their viewers to gaze at the gaze.