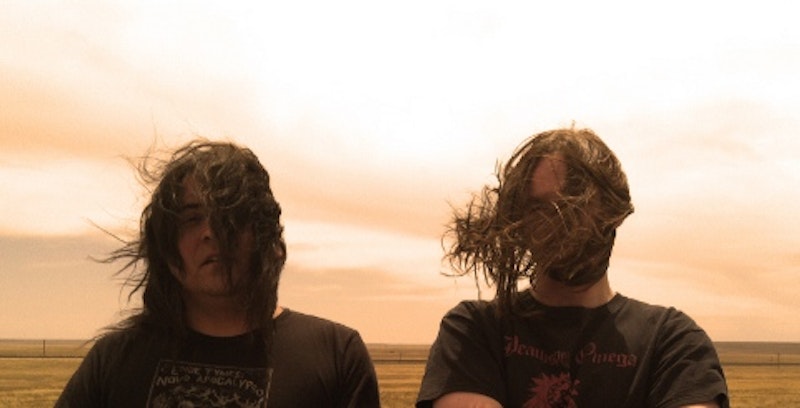 The Mesa Ritual tape arrives in a package so immaculate and airtight that, unless one possesses a jeweler’s hands, it will likely prove impossible to extract the cassette without tearing the façade. The tape is housed in its own hip-hugging rectangular sleeve that bears a stark, evocative photograph of peeling paint on one side, and some credits and shout-outs on the other. Then outside of that sleeve there is another sleeve displaying the name of the band, the song titles and lengths, an even more cryptic photograph. Both sleeves are a stark white. If you make it through all of this without causing damage, you will experience a slight rush of elation, as though you’d just completed a Rubik’s Cube for a gathering of friends. The exactitude on hand here is overwhelming: band and label alike put a great deal of care into this released, as is evidenced by the music contained at its core.

Mesa Ritual consists of Raven Chacon and William Fowler Collins, a New Mexico-based duo whose perm-flattening live set suggests the sonic aspect of being sucked into the fuselage of a jet engine; it is like standing alone in the middle of a desert with the sky falling on you at churning, ever-accelerating speeds; while this happens on a purely psychic level, the experience is also physical. This is the Mesa Ritual set I caught at Ende Tymes 2014; watching it at home doesn’t ever begin to compare to living it in person. Mesa Ritual, meanwhile, is a more artful beast, building judiciously to jostled static barbs and tunneling chatters and screaming signals with transistor radios digesting within. Here moods are segmented into several minute chunks that demonstrate the pair’s various intensities and techniques.

Twelve-minute album capper/standout “Procession VIII” stretches space and time in interesting ways, incorporating the violins of guest player Szu-Han Ho into an escalating, increasingly complex drone that rivals Psychic Secession-era Yellow Swans for face-melting orchestral noise alchemy; it’s arguably among the best noise album cuts I’ve come across this year. There’s a lot to appreciate here, but Mesa Ritual’s real function is promotional, like a cleverly cut movie trailer that entices without giving away the store: when this band comes to you town, see them live.