A lot of duds, but gems as well. 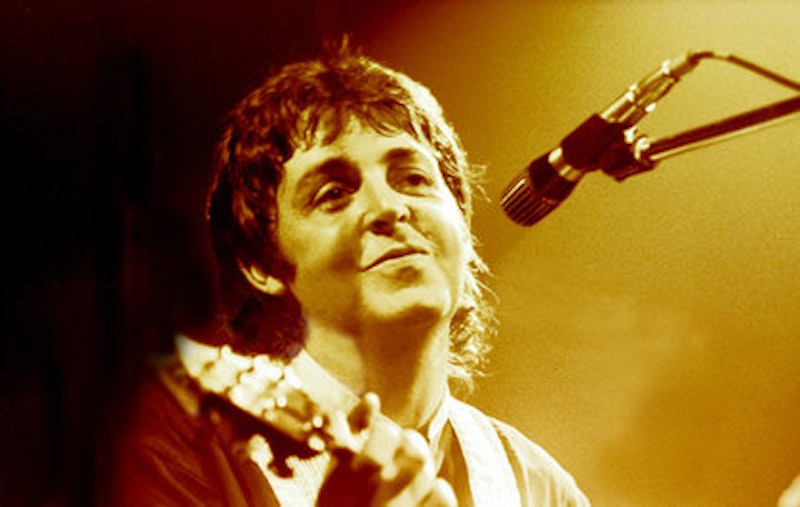 This winter, as the first Beatles’ singles turned 50 years old, the world was flooded with a fresh crop of material: never-before-heard, mostly marginal recordings, a book of John Lennon’s letters, a collection of interviews they did with the BBC. Tom Doyle, author of the recently released Man on the Run: Paul McCartney in the 1970s, takes advantage of this bonanza, but he wants to focus on, and gain control of, the post-Beatles story, weighing in on the competition between John and Paul. “Behind [McCartney’s] lasting image as a Bambi-eyed soft rock balladeer,” Doyle writes, “he was actually a far more counter-culturally leaning individual… than he is given credit for.”

McCartney starts the 1970s as “a man on the run—from his recent past as a Beatle, from his horrendous split with his bandmates, from the towering expectations that surrounded his every move.” Doyle revisits the end of the Beatles, but doesn’t spend long on that endlessly-dissected breakup. He does point out that before the final split, McCartney was “actually the only member who… hadn’t previously walked out of the band.” Doyle also declares that although “the wives would take the blame [for the split],” “it was Allen Klein [an untrustworthy, exploitative businessmen]…who broke up the Beatles.” Other important factors played a role; most notably, making art under immense pressure strains all relationships.

Over the course of the decade, McCartney released more than an album a year, working alone and with three different iterations of his band, Wings. He sold over 100 million records—significantly more than any of his ex-bandmates. Initially, struggling with post-Beatles pain, he holed up with his family on the Kintyre Peninsula in Scotland, self-medicating and recording often whimsical tunes in home-studio conditions.

“While elsewhere Lennon was screaming his pain,” writes Doyle, referring to the Plastic Ono Band album, which Lennon said was influenced by his scream therapy, “it was typical of McCartney to mask his with melody.” Compared to the meticulous studio recordings of the Beatles, McCartney was operating in a newly loose, playful way, experimenting with various sounds. “He muffled boomy tom-toms with towels or simply moved the cymbals farther away from the microphone,” writes Doyle. McCartney remembers, “It was brilliant, actually… pure sound.”

Following a couple of solo albums, he recruited a band—like so many musical virtuosos, he liked the experience of being in control, of leading a group of musicians. Part of him also hoped for a second Beatles experience. “The idea was to get a bunch of mates together,” said McCartney. “I wasn’t interested in putting it together professionally.” At first, the musicians didn’t know whom they would be playing with. One drummer was “booked for a nameless demo session” and “turned up at an address in an unsettlingly seedy area of Manhattan” only to find he’d be drumming for one of the most famous men in the world.

There were problems right from the start. “[T]he money deals with the musicians were done, in a foreshadowing of the troubles to come, purely ‘on a hippie handshake.’” McCartney also pulled his wife, Linda, into band duty—which sometimes caused tension, especially at the beginning of the decade, since he had to teach her how to play instruments the way he wanted. McCartney, usually in possession of a good sense of humor, once said of Linda, “she’s the lead gardener… I’m the rhythm gardener.”

Of all the albums, Band on the Run, from 1973, is the one that reminds you that McCartney is one of pop’s premier songwriters. It displays all his melodic talents and the same sort of clever collage mentality that made the back half of Abbey Road so memorable. It also helps that none of the songs are forced to battle with burdensome, heavy-handed Phil Spector production. (Spector produced Lennon’s early 70s work and George Harrison’s All Things Must Pass.)

According to Doyle, McCartney wrote the song “Picasso’s Last Words,” from Band on the Run, on the spot to impress Dustin Hoffman. During the recording of the album in Lagos, Nigeria, McCartney was mugged and lost his demo tapes, so he had to rewrite all the songs as best he could from memory. He also had to argue with the famous drummer Ginger Baker—best known for his work in Cream—who wanted McCartney to use his Lagos studio and boost its credibility. Fela Kuti showed up to the recording sessions, angry at the thought that an ex-Beatle was trying to steal the Afrobeat sound. McCartney had to play him demos to prove that he wasn’t channeling African funk. (One wonders how Fela felt when he heard the Talking Heads’ Remain in Light.)

Elsewhere, McCartney’s catalogue is spotty. His enthusiasm is palpable, his willingness to experiment—on an album like McCartney II, where he discovers the powers of synthesizers—admirable. There are imperiously dominant songs littered across the years, many of which are ballads: if you’re not into “Maybe I’m Amazed,” from McCartney, try “One of These Days,” possibly his prettiest song from the decade. He became pals with Michael Jackson—who recorded McCartney’s “Girlfriend” on his 1979 album Off The Wall (the two would later duet on Thriller). McCartney also sang a couple saccharine tunes with Stevie Wonder.

McCartney’s 70s catalog really serves to illustrate how good the Beatles really were. A musical genius plus unlimited resources plus plenty of energy doesn’t necessarily equal great material. McCartney is gracious and self-aware enough to acknowledge that he produced some duds. “Yeah, some of my stuff was kinda lightweight, but a lot of it wasn’t… There was enough good stuff… But there’s a lot of dubious stuff in there.” It’s hard to imagine Lennon admitting that.

Doyle may be overplaying the need to reevaluate this decade in the life of an ex-Beatle. Critical respect for McCartney’s work is on the rise: these days, he’s seen as a forerunner of lo-fi recording and an indie sensibility—recording what he wanted, how he wanted, regardless of labels and markets. As the man admits, plenty of the tunes are forgettable. But likability and talent carry you far.