On the newly released Live at Town Hall. 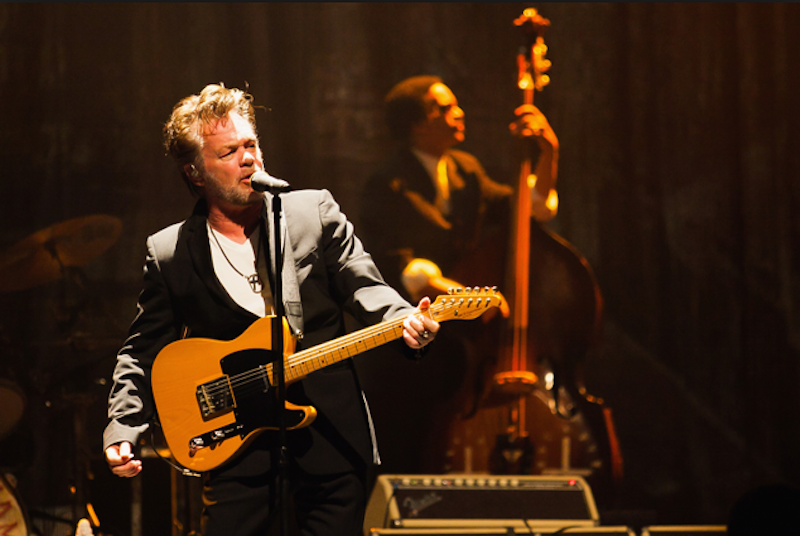 John Mellencamp is an authentic voice of American music, advancing the tradition of rock ‘n’ roll, while digging up Americana roots of folk and rhythm and blues. Originally denigrated as a poseur when his record company forced him to adopt the unfortunate moniker of Johnny Cougar, Mellencamp has outlasted all the poseurs with a commitment to creating bawdy rock, bittersweet songs of joy and melancholia, and impassioned political dissent.

Live At Town Hall, his first proper live album—a complete show from a 2003 intimate theater date in New York—is the latest evidence of Mellencamp’s quiet, but aggressive campaign for attaining the prizefighter’s championship of supremacy in the ring of roots rock. Often idiotically miscast as the “poor man’s Springsteen.” Mellencamp’s run of great, varied albums from the mid-1980s to the present, demonstrates that Springsteen is actually the rich man’s Mellencamp—the glamorous, critic-approved restaurant down the street from the diner that serves better food. Live At Town Hall captures Mellencamp at his truest—at once an independent performer and an enlistee in the tradition of blues and folk. He was not quite at the peak of his powers in 2003, but he was close to it.

Earlier in that year, Mellencamp released an album of blues and folk covers called Trouble No More. The idea’s genesis was Mellencamp’s short set at a memorial concert for the late editor of Billboard magazine, Mellencamp’s close friend, Tim White. One of the songs Mellencamp sang was the Robert Johnson classic, “Stones In My Passway.” Blown away by Mellencamp’s vocal force and phrasing, and impressed with the rural arrangement his band used for musical accompaniment, his record company executives made the unlikely suggestion of a full album in the Americana style.

Mellencamp became an archivist, poring through the history of American music to select the 12 songs for his new album. Son House, Willie Dixon, Woody Guthrie, Hoagy Carmichael, and even Lucinda Williams all receive the Mellencamp tribute on the underrated set of songs. As he does with most of his work, Mellencamp recorded the songs live in his personal recording studio in Nashville, Indiana. The southern Indiana musical and residential home of Mellencamp, the region where he was born, raised, and continues to live, always placed him in perfect territory for the hybridization of American music. In his own music, he takes equally and liberally from the Memphis rock ‘n’ roll of the 50s, the louder rock of the 60s, the soul of Detroit, and the folk of the rural south.

Trouble No More might’ve seemed like a leap to rock radio listeners who associate Mellencamp only with “Hurts So Good” and “Jack and Diane,” but it was actually a natural continuation of his artistic growth and development. Mellencamp instructed his lead guitarist, Andy York, to study the classic records he was set to play, and develop a stripped down, subtle style. “No Foghat” was how Mellencamp put it at the time. He didn’t want the sound of classic rock bastardizing the blues.

Live From Town Hall is a recording from one of the three shows Mellencamp did to promote the album (Los Angeles and Memphis were the other two). Mellencamp and his tight band work the album in full, and add a scorching version of Bob Dylan’s “Highway 61 Revisited,” along with a trifecta of Mellencamp hits—“Small Town,” “Paper in Fire,” and “Pink Hoses.”

Mellencamp’s voice is ferocious. He shouts and growls through the set, and makes it easy to understand why typically aloof record company executives were so moved by his rendition of Robert Johnson. The first band in which Mellencamp sang professionally was a blues cover band in Indiana. Given those beginnings and the prowess he shows on the new album, it seems that had he desired Mellencamp could’ve had an entirely different career as a blues singer. The band, featuring drums, slide guitar, acoustic guitar, violin, accordion, and standup bass, is equally comfortable at the country dance (“Diamond Joe,” “Teardrops Will Fall”) as they are the front porch (“Johnny Hart,” “To Washington”) and the sweaty, smoky blues club (“Down In The Bottom,” “John The Revelator”). The union of Mellencamp’s voice and his band playing traditional music is electrifying. They are still, after all, a rock ‘n’ roll band, and are able to inject the aggression of their own genre just at the right moments—the bridge of “Stones In My Passway,” the conclusion of Son House’s “Death Letter,” and the entire take on Dylan.

Mellencamp’s own music hardly seems foreign at all in the show. Listening to his hits side-by-side with Americana chestnuts, makes them seem like distant cousins. The family reunion is harmonious and peaceful. “Small Town” originally appeared on 1985’s Scarecrow, an album that Mellencamp and band prepared to record by spending months inside the Indiana studio playing 60s rock. Mellencamp wanted the album to possess the same reckless energy as his favorite 60s records, and figured the best way to accomplish that goal was to play 60s rock ‘n’ roll until the style became part of the muscle memory and heart of his band. There is enough twang on the album that one could seriously argue that it preceded, perhaps even invented the “No Depression” movement of alternative country. On Live From Town Hall, “Small Town” becomes a soulful blues song. Mellencamp’s vocal is both content and mournful, as he repeats, “probably be where they bury me” five times at its conclusion. It flows effortlessly and seamlessly into a slow and sweet reworking of Lucinda Williams’ “Lafayette.”

The two Mellencamp songs that close the concert—“Paper in Fire” and “Pink Houses”—are convincing choices for punctuating the performance, and also demonstrating the close relationship between Mellencamp’s own style and the style he covered on Trouble No More. Mellencamp once called “Paper in Fire” his “ultimate song.” A song about the psychological destruction of vanity and selfishness, it was originally on The Lonesome Jubilee, Mellencamp’s follow-up to Scarecrow and his first foray in the world of traditional instrumentation. With Lonesome Jubilee, Mellencamp added an accordion, violin, and dobro to his rock ‘n’ roll band to create an exciting style he called “gypsy rock.” Gypsy rock borrows equally from folk, blues, and gospel, and in doing so, points to the proximity between Americana and rock ‘n’ roll. “Pink Houses”—perhaps Mellencamp’s signature song—is played with an emphasis on its folksy and bluesy beginnings.

The conclusion of the album makes clear the only real disappointment with the package: the inadequacy and superficiality of the liner notes. Those who still buy CDs will open the notes to find a rudimentary essay by Bob Merlis. Merlis obsesses over the two moments of Mellencamp’s political protest of the Iraq war during the show. First, Mellencamp performs a country version of the Woody Guthrie song, “To Washington.” The song, on Trouble No More and Live At Town Hall, features Mellencamp’s new lyrics condemning the Bush administration for invading Iraq under false pretenses. “Highway 61 Revisited” follows with Mellencamp changing the words in the final verse, singing about a “Texas gambler who wants to start another war” and concluding with the advice to “give Donald Rumsfeld a million guns and let him have it out on highway 61.”

Mellencamp’s loud moments of opposition to the disastrous foreign policy of the Bush administration were timely and just, but 11 years later, they are the least interesting aspects of the show. Merlis’ fixation on them is shortsighted, unimaginative, and weird.

In the final minutes of “Pink Houses,” the refrain “ain’t that America”—always a conflicted statement—becomes both a plaintive and triumphant summary of everything the audience has heard up until that closing song. America is a country fighting a stupid and cruel war, but it’s also the country of romance in “Lafayette.” It’s the country of community in “Small Town.” It’s the country of murder in “Joliet Bound,” and it’s the country of hope for redemption in “Diamond Joe.”

Live At Town Hall, recorded on July 31, 2003, is a profound and powerful document of John Mellencamp, one contradictory American artist wrestling with all the contradictions of American life—at once celebrating and condemning them.

“This is not about me—it’s about this music and the heritage of American music,” Mellencamp said during an interview before the Trouble No More show in Los Angeles. The spirit of the music is inseparable from the spirit of America, and on Live At Town Hall, Mellencamp exorcises both.

—David Masciotra is a columnist with The Indianapolis Star. He’s the author of All That We Learned About Living: The Art and Legacy of John Mellencamp (forthcoming, University of Kentucky Press).