Stones Down for the Count

How long can the Rolling Stones suck before it matters? 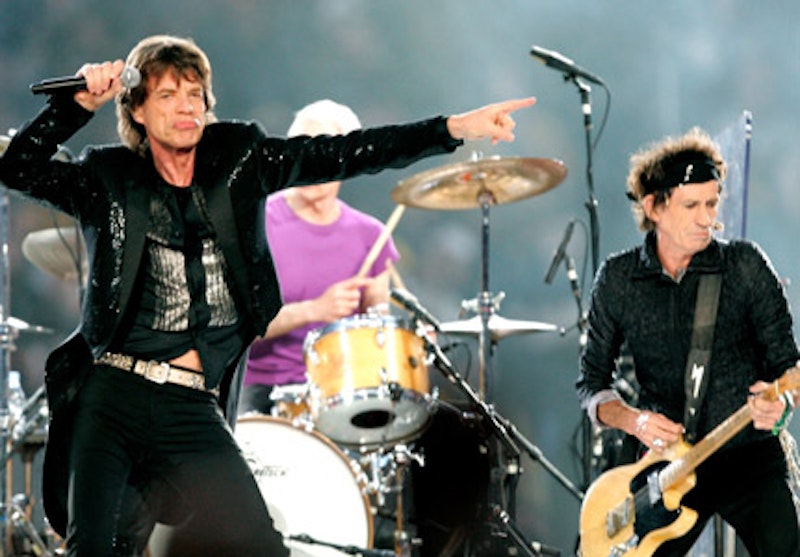 And now, I give you… the greatest rock and roll band of all time!

This is not one of the songs for which the Rolling Stones are celebrated. On the contrary, it's late and decadent Rolling Stones, from their last studio album in 2005, and it has little if anything to recommend it. "Rough Justice" is a shapeless self-parody, Mick Jagger bellowing tunelessly and prancing pointlessly while the distorted guitar noodles around in search of a hook. It's Exile on Main Street as soulless paint-by-numbers retread.

It's true that the band here has been together in one form or another for longer than 50 years at this point; it seems natural that they'd lack their former pizzazz. But… well.

That's "Hey Negrita," a stolid turd of a reggae exercise from way back in 1976, with Mick shrieking at Billy Preston in a desperate effort to distract from the boring groove. It's not necessarily worse than "Rough Justice," but it's not a whole lot better. Indeed, there's a remarkable consistency there across the listless decades. Aggressive sexualized edgy but not too edgy lyrics, check. Boring riff repeated ad nauseam with nothing really happening, check. Charlie Watts radiating perhaps inadvertent honesty by looking like he's ready to fall asleep, check.

The Rolling Stones released their first album in 1964; their last unquestioned masterpiece was probably Exile on Main Street in 1972. Goats Head Soup from 1973 was arguably pretty good, and after a couple of crap albums they managed to get their act together for a final blast of relevance on the disco infused Some Girls in 1978. So, being as generous as possible, that's 14 years as a great band and more than twice that as… not a great band. Or, less charitably, as a truly shit band, with a series of hackneyed, irrelevant singles that make Billy Joel look authentic and the Eagles inspired.

You could say, well, they fell off; they were good once and then they took too many drugs and got too old, fat and rich. It happens. But the really painful part is the extent to which the long, endless, still ongoing embarrassment is tied up in the good. The Rolling Stones are still the Rolling Stones. The worship of Chuck Berry, for example, is as evident in the 1983 "She Was Hot" as in one of the Stones' first covers 20 years before. But by the time of the later track Berry's drive and wit has been robbed of all its snap; what's left is an embarrassing shell, a couple of corny winks, and not even a stinging guitar solo. It's Berry as pallid shambolic pfft for old farts. Which leads you to the uncomfortable question, were the Stones always just pallid shambolic pfft for old farts? Watching them shamelessly deface their influences on stage, you wonder if that wasn't what they were always doing. If they've been this bad for so long, can they really ever have been good?

The answer is that, yes, they were good for nearly a decade. "Tumbling Dice," with its ragged, bluesy take on Motown, is still funny and weird and infectious; skanky pop bliss. Everything that fails later on works here. The half-assed crappiness of their dotage here comes across as casual swagger; the smug, crabbed humor here is a knowing chuckle. And, of course, it doesn't hurt that the hook is actually a hook, rather than the sad shadow of one.

You could say that the long years of doing it wrong make the earlier classics shine brighter; you can appreciate more fully how everything that could’ve gone wrong but didn't. But it's also true that "Tumbling Dice" is a bit too much like "Hey Negrita" for comfort; it doesn't take much squinting to see a terrible song in there, ready to burst free. The classic Stones albums will always be classic, but 40 years of dreck has to count for something too. The Stones may be one of the great rock bands, but they've spent time and effort to ensure that they'll also be remembered as one of the worst.