Still believing in the bands you haven’t listened to in years. 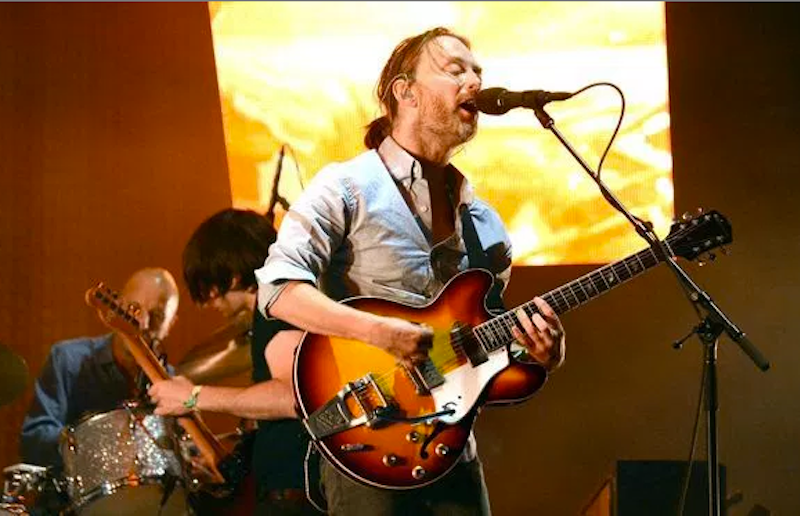 It’s been five years since Radiohead last put out a record. 2011’s The King of Limbs was a rushed and slight work: a couple of good songs, interesting cluttered production and textures, but beyond that, they were treading water, signaling that perhaps the well had run dry. Even the name sounds like it came straight out of a Radiohead random name generator. Three and a half years earlier, they released In Rainbows, a record I always resented for its dry production and sterile stereo separation. It has great songs, but sounds like a radio session. I’m shocked that In Rainbows has risen in the consensus as one of Radiohead’s three landmark albums, alongside OK Computer and Kid A.

Besides the surprise release and the pay-what-you-want distribution model (which The Smashing Pumpkins had done seven years earlier), what was so great about In Rainbows? The best songs are on the bonus disc (“Last Flowers til the Hospital,” “Down is the New Up,” “Up on the Ladder,” “Bangers + Mash”). Hail to the Thief remains my favorite, a sprawling, asymmetrical collection of songs that span every era, genre, and approach the band had explored up to that point. It feels like a double album, despite running just under an hour. The extremes are amplified: the weirder songs are weirder (“We Suck Young Blood”), the heavier songs are heavier (“Myxomatosis”), and beautiful ballads like “Scatterbrain” and “Sail to the Moon” are understated and effortless in a way that makes the bombast of OK Computer and The Bends sound cheap and chintzy.

Enough gabbing! Radiohead has a new album out now, called A Moon Shaped Pool, and it’s quite lovely. Although Radiohead was a major gateway band for me in my early teens, I haven’t listened to or paid much attention to them since 2007. How could they ditch the gloriously gauzy and immersive sound of their previous work for the Peel Session vibe of In Rainbows? Well, with their fourth album in 13 years, I’m finally excited about this band again. Why should you care? Growing up and becoming attached to bands as they go through their imperial phase is risky business: their white hot streak may last five or 10 years, but eventually they’ll do the unthinkable and put out something utterly predictable and paint by numbers, and you better hope they’re just being lazy, because otherwise they’ve lost it. Animal Collective is stuck in this muck right now, touring on a record that’s good but essentially a hodgepodge of their familiar tropes. They’re living up to their own clichés, and it’s dispiriting to watch, even as you support them. The same goes for Radiohead: after The King of Limbs, I really thought they had nothing left to offer, and they seemed tired, like employees clocking in. This isn’t really a review of A Moon Shaped Pool—I mean, it came out hours ago. I’m not a hack like Jon Pareles: I can’t whip up some bullshit about this being their “pastoral” album. Oh, please! Like many, I was taken aback by the surprise inclusion of “True Love Waits,” a song played live since 1995 but never released on a record. That was always one of their biggest white whale songs, and sequencing it here at the very end (in a gorgeous arrangement of disembodied piano and organ notes) reinforces the record’s melancholy look of regret back/down into the past.

As I cycle through my sixth listen, I feel immense relief that this band has come back after five years with something slow, sad, and, improbably, totally different from any of their previous albums. I love that I can’t sum it up in 500 words. I know I’ll be spending time with A Moon Shaped Pool, and that gives me hope beyond Radiohead: don’t give up on your favorite bands once they hit their 30s and 40s. No one is going to make perfect albums forever. Don’t be so eager to throw them on the heap, declare them done, and move on. If you’re like me, you’ve spent more time with certain artists than you have with friends or family. You owe them more than a t-shirt and a download code.