Me Versus the Boston Pops

This pseud wants to make something clear. 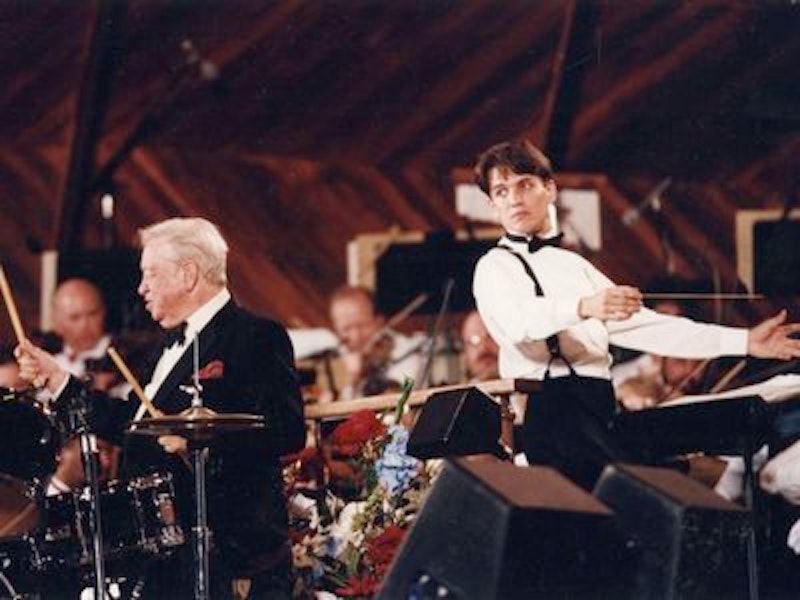 I have a problem. I’ve written about my teen years, the period when I liked classical music, and how I never realized that my key preference in classical music was this: I liked colorful, melodic pieces with a lot of variety and, where possible, short running times. If only I could’ve owned up to this fact. If I’d had that much self-knowledge back then, then later on I might have grown a sturdy little oak of self-respect.

But I have no such oak, so having written the piece, I worry. Will people think I liked the Boston Pops? By which I mean, will they think my idea of classical was the kind of stuff the Pops have in their concerts? Bits of Offenbach, a couple of Strauss waltzes, Rossini overtures run together… that kind of thing. Crowd-pleasers for dopes who aren’t clued in. Oh, the fans want to feel cultured, sitting there on their picnic blankets. But they don’t know. I knew. When I was a kid, I listened to Stravinsky’s Les Noces. You try that at a Pops concert. I also listened to Offenbach, of course, but not bits: the entire Tales of Hoffmann. My record of Strauss waltzes was secondary to Die Fledermaus, which I listened to over and over.

Hoffmann and Fledermaus are bouncy, of course. Pops stuff. But they were the lower end of my repertoire. I liked stuff that was—how does one say?—far more prestigious. By “liked” I do mean liked. I’m talking about the pieces of music I listened to many times, not the ones I attempted and found unrewarding. Maurice Ravel’s La Valse is short and bizarre, so I might have told myself I liked it. But I stayed honest. I suffered through La Valse because the record had that piece between two pieces I wanted to hear. Getting up and lifting the needle was sometimes a project I could tackle; sometimes it wasn’t, because my laziness has always been magnificent. When the needle wasn’t lifted, I’d hear La Valse. Next time I’d try not to.

But enough. Let’s get on record my teenage classical music listening picks, my favorites, my mainstays. Les Noces top end, Fledermaus bottom end, and we’ll do the rest by composer. From the top of my head:

Igor Stravinsky, especially Petrushka, Pulcinella, Les Noces and L’Histoire du Soldat; Sergei Prokofiev, especially Romeo and Juliet, Lt. Kijé and Love of Three Oranges, and his Symphony No. 1 (Classical); Maurice Ravel, especially Le Tombeau de Couperin, Pavane for a Dead Infanta and Boléro (now I can say it); Beethoven, especially Symphonies 3 (Eroica), 6 (Pastoral) and 9 (with the “Ode to Joy” chorus), but not the piano sonatas or the late string quartets; Mozart, especially The Marriage of Figaro and The Magic Flute, and his Flute Quartet in A Minor; Brahms, the usual and especially Symphony No. 3; Tchaikovsky, especially Symphony No. 5, Swan Lake, Souvenir de Florence and the peasants’ chorus from Eugene Onegin; Wagner, the preludes and overtures (especially Liebestod and then, a rank below, Meistersinger); Berlioz, Symphonie Fantastique and Harold in Italy; Puccini, Turandot and Le Bohème; Verdi, La Traviata and the duet in Don Carlos.

Oh, there was more, much more. But here’s the kicker. I worried about people thinking I liked Boston Pops stuff, semi-classical, and nowadays the Boston Pops hardly touch that kind of thing. For a recent event: “Drawing from a selection of the orchestra’s unmatched library of 3,500 exclusive orchestral arrangements, audience members will vote for songs from mobile devices live at the concert. Choices will encompass some of the best music from classical, film, Broadway, and rock—the great breadth of music the orchestra has played during 20 years with Keith Lockhart at the helm.” Glad classical got in there, but it’s a ghost. No doubt decades have gone by since the name Boston Pops made some smartass groan, “Oh God, von Suppé’s Light Cavalry Overture.”

But I want to be clear. I didn’t like Boston Pops stuff. I liked the real thing.