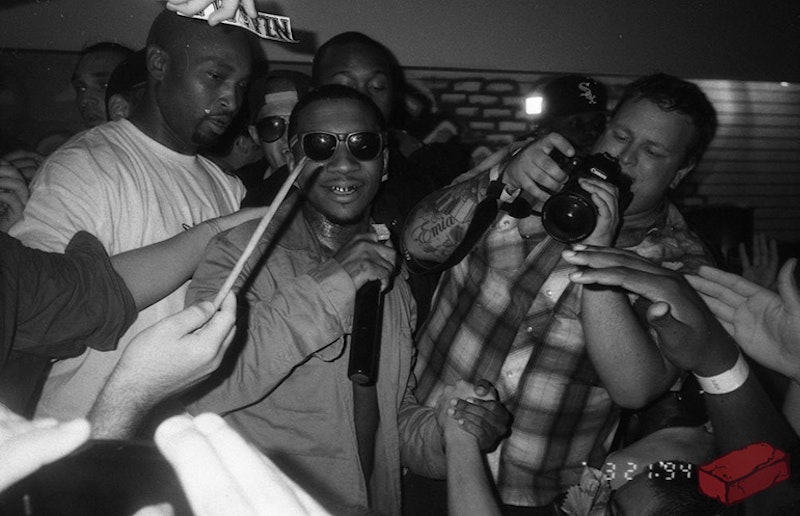 In the first Pimp & Circumstance we discussed the way the media portrays rappers, specifically the media’s reaction to Kanye West’s comments on George W. Bush. With a little perspective it’s easy to draw a line between an insatiable 24- hour news cycle and the gradual transformation of rappers—by definition artists and entertainers—into figures more closely resembling C.E.O’s or politicians. Even if the mythologies rappers create for themselves are obvious facades, they still have critical implications. Chiefly, they build expectations in the consumers who sustain the demand for hip-hop, who in turn project their ideologies back onto these increasingly accessible public figures. This cycle of digesting and regurgitating culture functions like a snake eating itself, or a feedback loop.

This terrifies the people wielding power within the music industry whose leverage is in marketing and distribution, i.e., access, the ability to both create demand and manufacture supply. The influence of major labels may be waning, but that doesn’t speak as much to the perception of a shrinking market for entertainment so much as demonstrate that nature abhors a vacuum and in turn, it’s human nature to innovate towards efficiency. The methods for consuming music have changed so rapidly that the existing infrastructure is vulnerable, and the rules are begging to be radically rewritten. The machine that turns art into popular, profitable culture has been streamlined, but it still requires a great amount of skill to operate.

Judging hip-hop in a strictly musical sense is like pointing a microscope at the moon. Its enormous complexity makes consensus impossible. There’s no rational way to create a scale capable of comparing Kanye West and Lil B objectively, nor does it matter.   Because, for all the obvious discrepancies in their approach to hip-hop, Kanye West and Lil B share a common ambition.  It’s a relatively humble ideal they’ve achieved despite the countless hurdles they’ve overcome as black men in America: ownership. Artists strive to distill experience, emotion and talent into works that connect with an audience on a deeper level. Whether it occurs in this life or the next, to feel love, validation in their sense of purpose is the last rung in the ladder to immortality. To focus passion into renewable creativity requires a rare kind of genius. The exact trait is a combination of ineffable qualities, but those that possess it are endowed with a unique sensitivity akin to prophets, or maybe just players a few steps ahead of the game.

Ownership is power, and an uncompromised vision can be worth more than money—or in some cases, lots of it. Hip-Hop was conceived as an expression of pride in a culture forged on the streets of The Bronx, not limited to music but united by a passion for an inner city community with an appeal so universal it’s spread like wildfire, sweeping across oceans and storming over language barriers. While some struggle to experience the same purity of intention they felt from “golden era” hip hop in a song like Lil B’s “Awesome,” the same spirit is there, it’s just been obscured by hip hop’s adoption into mainstream culture.

As soon as hip-hop began to get appropriated it was forced to evolve. When a culture is in danger of losing its identity to assimilation it’s forced to invent a new language. Swag will never grow old; it’ll be on to the next one.

The haves live in a world of their own creation. Their culture, their way of life is large and crushing. The crushed might engage their claws (if they can remember that they have them!) to survive. Hip-Hop culture embodies a creative—dancing, nasty, funky, beastly, seemingly alien, sometimes frightening—spirit. The Margiela jacket is funky. The ride is funky (smells like wonton soup), the words are often offensive and the behavior in videos (and socially), to the larger overriding culture, is reprehensible.

Our disenfranchised youth carry with them so many burning questions and rightfully so. Ideally, some may learn as they mature to see through the dark and shadowy veil in which hip-hop is so often shrouded, and into it's elusive roots. Knowledge and fire is there to be had for anyone who takes the time to watch and listen closely. In “Unchain Me,” from the controversial album I’m Gay (I’m Happy), he boasts from the shores of an obscure and unfettered ocean, “The wilderness is my home.” The dark, illogical, unruliness of Lil B’s music contains wisdom, ecstasy, and power in the face of which convention seems a puny opponent.

I teach at a private high school for young people with learning differences or emotional disturbance or both. A lot of the kids I work with are heavy into Lil B. He talks like they talk, they have a similar sense of humor, they too feel like “goons” and they too wear “tiny shirts and tiny jeans” sometimes. They feel it.

Lil B gives a loud voice—catchy as all hell—to multiple and oppositional facets of his personhood in the spirit of acceptance. Instinctive life, sexuality, and power hunger lie deep within us all, but most of us would prefer to deny it. All that is dark and nasty and that so desperately craves expression, comes out this boy’s mouth unabashedly. One minute he’s a robber and then he’s the devil, the Based God and Ellen DeGeneres.

They gravitate towards his passionate acts of free speech. They too want (and deserve) that freedom. Giving pause to the rational, socialized mind in whose eye the obscenity of Lil B’s music may seem irresponsible or destructive, my natural mind wants to encourage this fascination, to help these young adults learn from this artist and become inspired by his acts of defiance and also of silliness and honesty. One of my students, a junior, said that what drew him to Lil B’s music was his “unique ideology” which he defined as “based rapping from the soul and heart.” One senior said, “I just fuck with him because he doesn’t let what other people think determine what he does with his life.”

What I see is a young man who is unbelievably empowered and curious and who demonstrates that the hurdles set up by an oppressive society—hardship—can be surmounted gracefully by a purple Cadillac spaceship with neon rainbows spilling out the exhaust pipe. Yes.