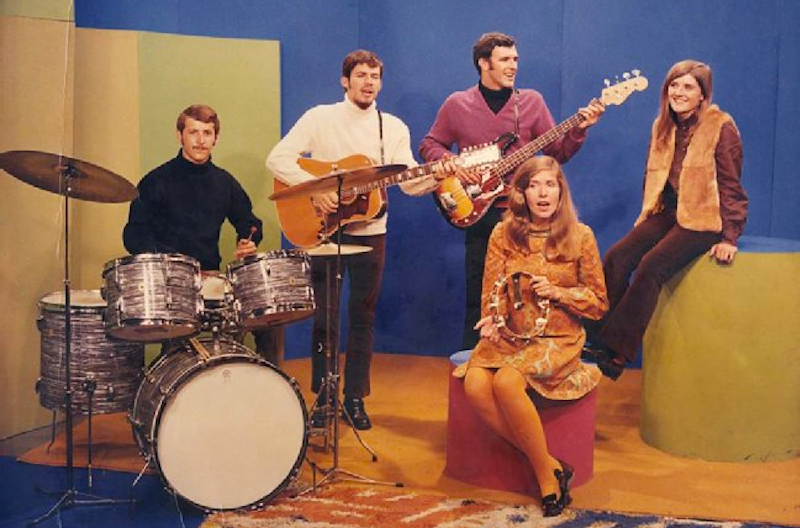 If there is one style of music that epitomizes the convergence of 1960s counterculture and commerce it's soft psych. Also known as “sunshine pop” or “light psychedelia,” soft psych was a drug-free "trip" through 60s pop's expansive soundscape: west European classical motifs rubbing shoulders with loungey light jazz dancing toe-to-toe with L.A./NYC bubblegum all filtered through a prism of later Beatles type lyrical whimsy.

This was the music tailor-made for all the squares in Middle America who dug Nehru jackets and plastic love beads, but whose idea of mind expansion involved little more than a glass of whiskey on the rocks and a lava lamp. In 1969 an indie label from southern California called Ranwood Records issued the debut self-titled album by composer Gene DiNovi's project Inner Dialogue, another big budget soft psych epic meant to open the wallets and minds of all those California Dreamers languishing in the barren cultural deserts of suburbia. As a testament to the genius of DiNovi, lyricist Tony Velona, and their Sunset Strip-ready back-up combo, the Inner Dialogue's debut stood out from the colorful soft psych pack by somehow subverting the genre's lyrical and compositional nature without sacrificing any of it's hook-laden melodies.

Despite counting actress Raquel Welch as a huge supporter, Inner Dialogue and its first album were rarely noticed in the late 60s. Yet their lack of popularity back then has become an afterthought. Thankfully for the record-buying public of today, it’s become a cult item among fans of obscure psychedelia, a fact that has inspired several Inner Dialogue reissues since 2001. The latest of these has come out on a label called Aurora. Other than its CD format, the Aurora version is essentially an exact reissue, meaning there are no extra tracks, new artwork, or extensive liner notes. Most anything else you'd want to know about the work of DiNovi and his crew here comes from their sublimely complex music itself.

Obsessions with psychiatric terminology and imagery derived from the very mundane suburban milieu that embraced soft psych dominate Tony Velona's acerbic wordplay in this album's unique portrayal of an unfulfilled 60s middle class desperately searching for a way to reconcile its need for emotional security with its curiosity for that hedonistic hippy pie-in-the-sky floating lackadaisically just a stones throw from their predictable world of utilitarian convenience. The songs here tackle everything from dehumanizing office work ("On Little Bits Of Paper") to infidelity ("The Touch") to excessive consumer culture ("Doctor Man") to the futility of domestic routines ("In Sequence" and "Yesterday The Dog"), their critical ferocity juxtaposed by Velona's often nursery rhyme-like phrasing. Not surprisingly, the songs containing Tony Velona's more cryptic sentiments are also the most poetic and musically challenging, such as the album's title track where dual lead singers B.J. Ward and Lynn Dolin melodically spar bouncing negative/positive diatribes off one another in a cartoony musical narrative in which the two compete for control over a self-doubting society hurtling fatefully toward some ambiguous mental eruption. "Now You See It, Now You Don't" also careens through a flurry of dramatic chords and key changes, its lyrics and vocal harmonies as crafty as the arrangement over which they're crooned:

“...Deserts with no oasis.
Lovers without a basis.
Saying "Hello" and "Goodbye"
Playing beneath a drip-dry sky...”

In addition to the dreamy vocal harmonies of Ward and Dolin and the jazz rock-ish rhythm section of Jerry Scheff, Robert Lanning, and Barry Zweig, Inner Dialogue's other signature sound would be DiNovi's weird electric keyboard the Dulcitron. A Google search produced very few results regarding details on the clavoline-like instrument, which according to the record's original notes was manufactured by Barcus & Berry Inc. Whatever it is, one thing is for sure: the Dulcitron's effervescent sonic texture imbues much of DiNovi's playing with a fluid electro funk groove seldom heard on most other vintage soft psych records.

Inner Dialogue's music would certainly have made a great soundtrack for the paisley day-glo finery of a 1960s strip mall fashion show. That this recording exists simultaneously as a critical statement about its consumer base and as a prime example of a commerce-driven musical genre at it's best is, however, what makes it a watershed moment in the history of pop music as social commentary.