Jenn Wasner backs away from Wye Oak and the results are breathtaking. 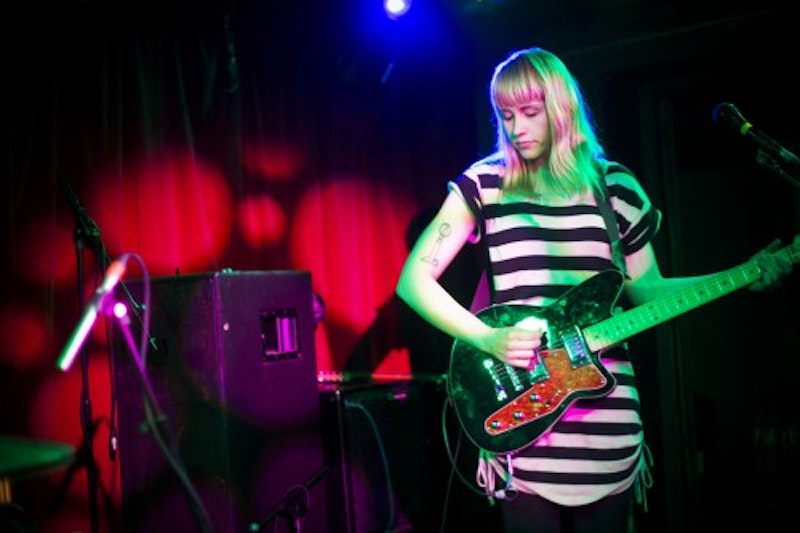 Jenn Wasner’s solo debut as Flock of Dimes is about the most promising thing I’ve heard all year. “Prison Bride” b/w “I Can’t Tell You Why (screwed mix)” are the first songs Wasner’s released outside of Wye Oak, the duo she started with drummer/keyboardist Andy Stack seven years ago. Playing hundreds of shows the past few years opening for bands like The National, Yo La Tengo, and the Decemberists inevitably took its toll, and these first couple Flock of Dimes songs are headier and more wound up than the rich, anthemic guitar rock of her main band.

Like Panda Bear’s Tomboy, you can see the instrumentation of these songs in a triangle: voice at the top, supported by spare guitar and simple beats. The explosion of affordable music equipment and technology has also led to an explosion of lazy motherfuckers who don’t want to take the time to work with what they have and make it unique or interesting. No one wants to pay to see clueless MicroKorg noodling and the stodgiest of rhythms, yet an endless sea of young musicians these days don’t seem to know what power their stompboxes and modules could potentially yield.

“Prison Bride” is that step forward. It’s a great song, because Wasner could’ve played or arranged it any way and it’d still be phenomenal. A lot of these laptop rock bands can’t stand the scrutiny of close inspection, because there’s nothing there. Modules and effects have no spirit—they’re only as emotionally potent as what you’re willing to put out. It’s a difficult time for songwriters because of how much terrain has already been covered. Revivalists abound. It’s really encouraging to hear new ideas, new sounds, and new progressions in rock/pop guitar, because even though we’ve seen it all as far as Rock ‘n’ Roll goes, the guitar is still such a powerful weapon. People relate to it: the guitarist will always be able to connect better than the DJ or the sound manipulator. It’s just a matter of finding a new take on it. With all the tools we have, it’s not that hard. But there are guitar heroes, and there are those who check their email.

Wasner and her producer Mickey Free’s attention to detail give me the most hope. With warm, enveloping guitar textures, tight loops, and some well-placed drum/percussion bits (maybe even a keyboard part? or a pitch-downed guitar), and her silky, miasmatic vocals (“Prison Bride”’s chorus sounds distinctly Middle Eastern), Flock of Dimes’ debut offering is another triumph for the city of Baltimore. True depth and a defined sound are rare these days—watch out for Flock of Dimes as she tours with Sharon Von Etten and Dirty Projectors this spring.
“Prison Bride” is available now on Friends Records, limited to 500 copies on clear yellow vinyl.