A discussion about Kanye West, race and the media. 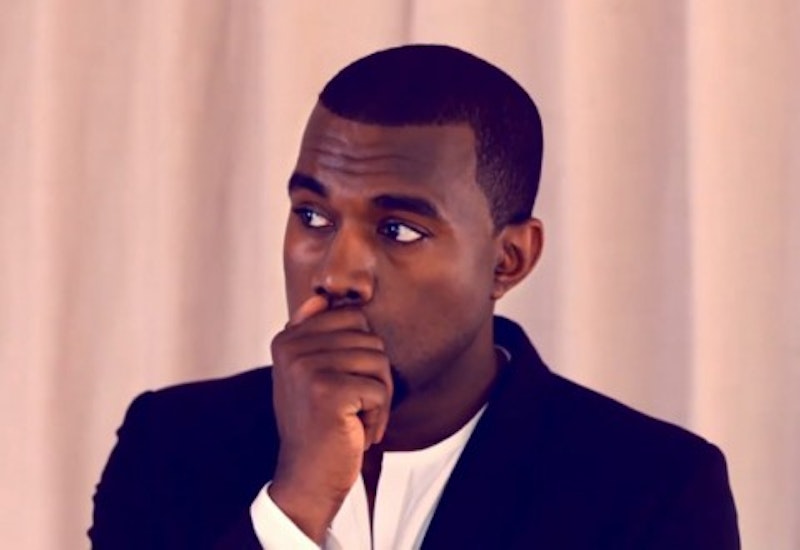 'Ello, 'ello, 'ello, hello white America, assassinate my character
Money matrimony, yeah they tryna break the marriage up
Who gon' act phony, or who gon try to embarrass ya
I'mma need a day off, I think I'll call Ferris up

At a neighborhood pub one sunny afternoon, I sat across the table from an old friend I’d met studying literature at UC Berkeley. We tossed back a few pints and slid a jar of raw pumpkin seeds back and forth across the table. After sharing some details about work and romance, we really got into to it: What’s in your CD player?

I’d been bumping the new Kanye-JayZ biz for a few days and was especially feelin’, “Who gon stop me?” and “Gotta Have It.” Venturing out into uncharted freelance frontiers, mantras like “Bow our heads and pray to the Lord… 'til I die I'm-a fucking ball. Now who gon stop me? Who gon stop me huh?” were really doing it for me. My pal scoffed at what, to him, were childish fancies. He called the record irresponsible. Referring to the opening lines of “Gotta Have It” he spewed that for Kanye West to blame white America for his failed marriage just seems too ridiculous. And continued, “Really most of it† makes me sick—if I was a black man, working hard to support a family, I would be outraged by their reckless display of greed.” At the time of this utterance, I became overwhelmed by harsh and simple reactions and then chose to go to a zen-like state of silent observation. After further contemplation, I want to address this issue further and publicly. Primarily, misunderstandings come from a mishearing on top of a misinterpretation of black lyrics.

Money matrimony is like saying, I’m married to the game. Which is the title of Too $hort’s 15th studio album and a line from the mouths and minds of Lil’ Wayne, Lil’ Scrappy, Young Jeezy, TI... I could go on and on.  In short, everyone says that shit—it’s a long-standing trope among black lyricists. They are not really married and (arguably) there is not really a game. Though they are inextricably a representation of the real environment from which they came, Rap is not reality. These songs are illusory fabrications. That said, picture this: Young white couple crowds MacBook Pro screen. Yeezy’s thick-jawed mug is underlined by scrolling lyrics in a silly font. Seeing the “hello” they don’t hear the “LOL.”

It’s a joke.  So what’s the punchline?

…speaking of, watch this:

I think it’d have to be Matt Lauer’s closing remark: “We look forward to Kanye’s return for a special live performance on the plaza.” Not sure if it’s laugh out loud funny, but at the very least It’s impressive to see him swallow so much of his own bullshit without choking.

Unfortunately the joke isn’t just on NBC, it’s also on the millions of people that treat that garbage as “news,” and it isn’t very funny—it’s downright tragic. Treating Kanye West like a politician is about as absurd as glossing over the actual politician, the *ahem* MOST POWERFUL MAN IN THE WORLD’s, assertion that Kanye West’s comment was the worst moment in his presidency. The worst moment in his presidency! I can’t even...

It’s a brilliant piece of spin, and it puts Kanye in an impossible position. Given that, his composure is remarkable. Lauer, after Kanye’s eloquent, heartfelt and more than gracious explanation for his statement, continues to try and back him into a corner, instead of say, trying to understand what might have prompted Kanye to make the statement in the first place, in the process ignoring any and all context for the quote. That’s what I’d consider seriously irresponsible, not, you know, the lyrics to a freaking rap song.

Beyond that, anyone who thinks that Kanye West needs to be a role model for black families clearly needs to look up the definition of entertainment. And even if you want to take it there, what’s wrong with Kanye West using symbols of wealth as a means to express power denied to minorities through years of systematic oppression? Rich and famous go hand in hand, that’s marriage and the game is the language of money. It wasn’t Kanye West and Jay-Z that invented it, but their lyrical dexterity gave them access to it, allowed them to hone it, and you better believe it comes off as threatening to those that either used to own it, or are used to being part of a pretty exclusive club. You know it must be true, because, um, it made George Bush really sad :-(