Everything about the band is interesting—except their music. 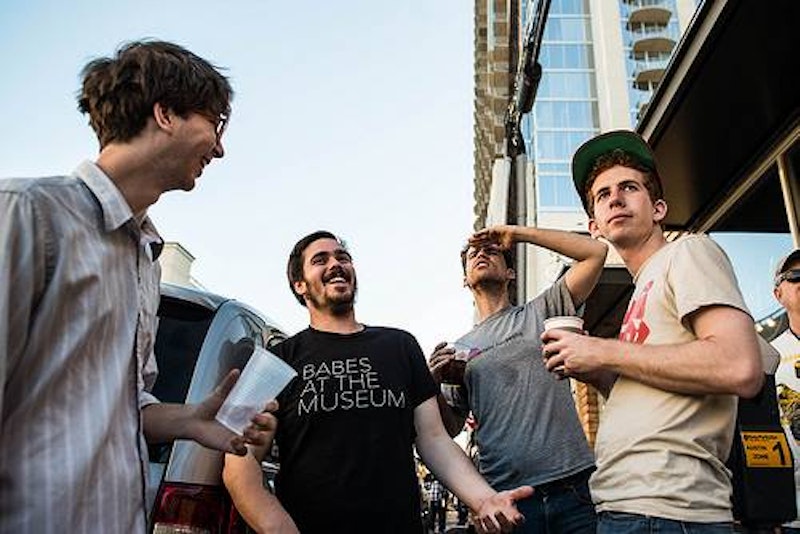 There’s only so much I can get out of Parquet Courts. I like them, but they’re a shameless re-tread band, not so much wearing their influences on their sleeves as totally inhabiting the world of the late-1970s and early-80s post-punk. It’s impossible to listen to the band without thinking of The Modern Lovers or The Talking Heads. They do it well, but I hardly feel a spark with most of their records. They have a handful of transcendent, shimmering moments of emotion and instrumental pathos: the song “Borrowed Time,” its hook and its beautifully understated and expressive guitar solo; the mini-LP Content Nausea and its taut opener “Everyday It Starts,” its mantra “Anxiety,” repeated in between passages of a menacing Drop-D riff by guitarist and singer Andrew Savage, backed and propelled only by a motorik drum machine pattern.

Beyond their music, Parquet Courts also fetishize post-punk aesthetics and classic rock clichés: two markedly different songwriters, one dominant and more consistent (Andrew Savage), the other less prolific but more tuneful (Austin Brown). I appreciate that the band, and especially Savage, are as invested in the presentation and all the aesthetic minutiae of making records, but his monotone, Jonathan Richman-esque sing-speak delivery dulls otherwise gorgeous tracks. The song “Human Performance” is full of high-def, glittery overdubs and drop-in parts—Byrds-like chords, violin, organ—but it’s all muddied by Savage’s droning and eternally bored voice. It’s a shame because I feel like these guys are sending up Pavement’s “too cool to care” attitude, and they’re much smarter than most rock bands their age, but Savage makes Stephen Malkmus sound like Freddie Mercury. The only time I’ve heard convincing emotion from him is in “Borrowed Time.” Savage’s best moment on here is “Berlin Got Blurry,” a puddle-colored song perfectly suited for his goose on a muggy day delivery.

Brown’s songs are more memorable and catchier. “I Was Just Here” and “Captive of the Sun” are instant tunes, and he has a much more expressive and dynamic voice than Savage. “Steady on My Mind” is another great Brown song, all Pavement guitars and a really moving vocal reminiscent of Ira Kaplan and Phil Elverum. Even when Brown does the monologue thing, it just works better—on “One Man, One City,” he sounds like Thurston Moore, and so do the guitars. I often feel like there’s no way into Parquet Courts’ music, it’s hard to become emotionally invested in a band that holds everything out at arm’s length in ironic gestures and straight up post-punk revivalism. It’s depressing how few young and active bands are students of music history, and how many of them are too stupid to feel embarrassed about making totally anonymous work that does nothing but clog up clubs and websites. Something’s gotta keep the lights on, and it’s frustrating when we get a band like Parquet Courts that are into the history and semiotics of being in a rock band without making any particularly moving or exciting rock music.