Maybe they’re right about one. But both? 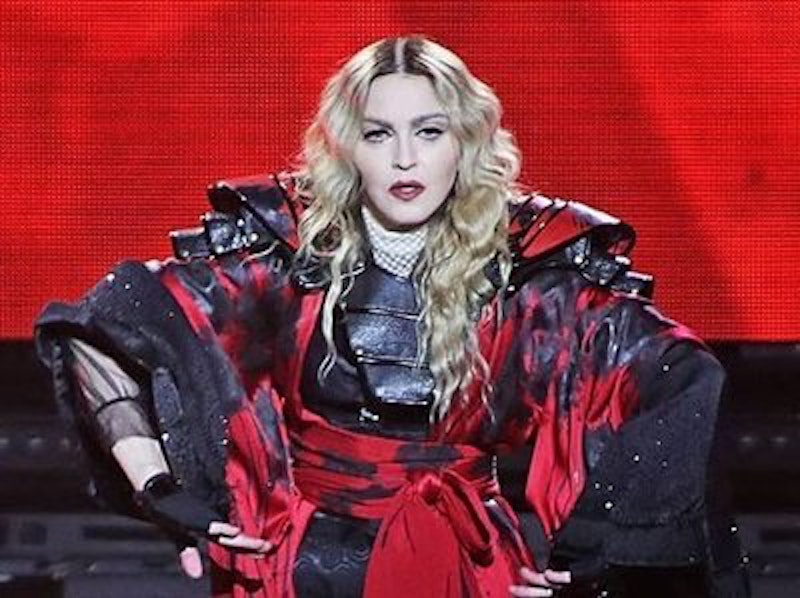 I guess somebody at the The Daily Beast really likes Madonna. She’s been crying on stage because her son went off to live with his dad. So the Beast has a question: “Is Madonna Really Having a Meltdown or Are We Just Sexist?” Well, I don’t know. Is that a strawberry or is this Milwaukee? Is Alec Baldwin really full of himself or is everybody secretly some kind of artisanal brewer? What I mean is that the two parts of the question don’t go together. An explanation is needed and that explanation does not appear in the Beast article. Kevin Fallon doesn’t tell us what’s sexist about noticing Madonna’s odd behavior. He settles for waving the term overhead, bunched with extra syllables for extra weight. Recent “takedowns” of Madonna suffer from “inherent sexism,” certain headlines are “crass, baseless, speculative, and sexist,” a newspaper column is “unforgivably misogynistic.”

The Beast article takes this line from Madonna herself. When she appeared to be drunk on stage, people said she appeared to be drunk on stage. Madonna went on Instagram to deny this idea and protest its existence. “Underlying all of this is sexism and misogyny which proves that not only do we not get equal pay but we are still treated like heretics if we step out of line and think outside the box!” she wrote. Again, no word as to why the speculation was anti-woman.

Possibly Madonna feels that, as the world’s supreme exemplar of womanhood, she can’t be criticized without all her sisters taking flak as well. But that’s a one-person belief, too narrow for anybody else to get on board. I bet the man at The Daily Beast follows a different tack. One possible line: women get tagged as crazy so men can dismiss them; therefore, any woman who’s tagged as crazy is having the same dodge worked against her. Another: Madonna’s odd behavior involves her child, so commenting on this behavior means commenting on Madonna as a woman. Talking about a woman as a woman, and doing so critically, uses her gender to, I don’t know, make things bad for her. So it’s sexist.

But what if the woman really is acting crazy? Yes, people can cry on stage. But Madonna’s problems go beyond that. From the Beast article: “Madonna has started numerous shows late, a whopping three hours behind schedule at stops in Atlanta and Australia… At a concert in Melbourne, she called Guy Ritchie a ‘son of a bitch’ and made a plea for a member of the audience to ‘please fuck me.’ At an earlier concert in Nashville, she called Ritchie a ‘cunt.’” (Ritchie is her ex-husband, the dad her boy ran off to.) The Beast doesn’t deny any of the incidents. We’re just told it’s bad form to add them up and wonder about Madonna’s stability. No, we’re not even told it’s bad form. We’re told it’s “sexist.”

Dig the parenthesis coming up. We learn that not long ago Madonna “pulled down the top of a 17-year-old fan at a concert, exposing her breast. (The teen called it the ‘best moment of my life.’)” But Madonna didn’t know the teen would be happy. The girl might not have been; some people want final say over what happens to their genitals and secondary sex characteristics. One hears that it’s really best to check about these matters before going ahead. One hears this, very often, from people who talk about “inherently sexist” this and “unforgivably misogynistic” that.

All right, a showbiz writer is in the tank. Fallon’s saying whatever he can to help his favored celebrity. He buries her wacky doings 11 paragraphs into the story, after a full seven paragraphs about other celebrities who have cried in public. At some points in his article he tugs at heart strings, at others he tries to jolly us, and at others he tries to intimidate us. The moments in that last group all involve feminism. Very often feminism makes a lot of sense. But today, for quite a broad audience, it’s developed an unfortunate feature. If you say something is wrong, you have to say why. If you say it’s sexist… well, you don’t have to say why, or not at The Daily Beast.

The piece does open with a simple but beautifully ripe one-sentence lead. This kicks off the piece’s heart-tugging section. The lead: “It’s a powerful thing when a superstar cries.” Camembert has to spend a week in the sun before it’s as good as that lead.