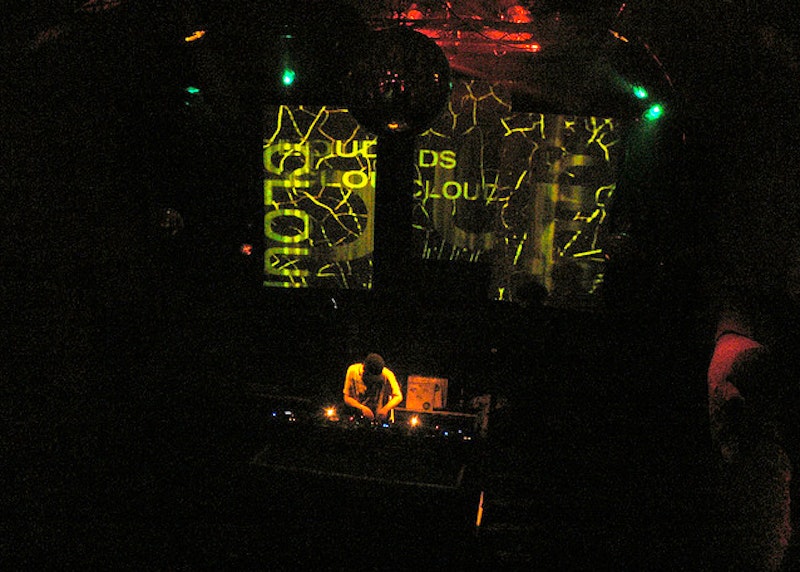 Eventually everything will be DJs. Coachella. Bonnaroo. Lollapalooza. Glastonbury. The air. Consciousness. Every subatomic particle will have its own bar, dance floor, smoking pit, a few listless college girls putting as little energy as possible into their sashays, and a pubis-faced guy fondling a MIDI-controller with one ear burrowed in headphones, the other feeling out the room.

In Baltimore, the mall punk swamp rock club the Recher Theatre closed—where Pavement, Sonic Youth, Animal Collective, Yo La Tengo, and Interpol once played—to be rechristened The Torrent Lounge, a dance club oriented to EDM, brostep, and trap. Good riddance. It’s a serious drag for the whole sound team who lost their jobs with little notice, but the Recher was just another rock club drowning in zombified regenerations of bad pop punk, butt rock, and ruddy bar bands.

“Dubstep” is now mocked by most who might’ve briefly flirted with Sonny Moore’s emo-techno army a few years ago, so of course nine out of 10 Hollywood movie trailers these days are set to drops, sexual oscillations, the wubbly bass throb. Even though styles like brostep feel as if they’ll go on until the end of time, as God’s punishment, all its main signifiers are already merely signposts marking a brief time in pop culture, just like JNCOs, or the video for “Stacy’s Mom.” Indie rockist dudes have plenty to whine and cry about because there’s a reason young teenagers aren’t responding to four white dudes in button-ups, dark jeans, and Pumas playing guitars and singing incoherently with their eyes closed. It’s a dead, exhausted sound. To connect with people in a non-intellectual way, get their heart and make them like you, it needs to be new and exciting. Something they’ve never heard before. The bacchanalia that Skrillex and co. touts around the world is exciting because it belongs to these kids and is highly melodic and physical. Whether you like it or not, novelty brings success in music.

So where do we go from here? With another one of Baltimore’s rock clubs, Sonar, shuttering to become a youth dance hall, live music feels less important than simply going out and maybe rubbing your front to someone’s back or vice versa. Entertainment, major and minor, independent and corporate, is so saturated that few are getting their message across at all, in an age when musical progress has hit an insurmountable digital wall.

I scrolled past the saddest image the other day: a band I used to know, dressed in punk-101 leather vests, stick ‘n’ pokes, and cut-off jeans, wearing pizza t-shirts, playing pizza guitars, in a punk rock music video about pizza. Looking sad as hell. There are so many sounds and songs and people trying really hard and falling on their face because what else can be done besides tweaking the past, or throwing together a convincing enough hodgepodge to make something new? The only option that makes any sense now is to go out, get a few drinks, pop some beans, and stare at your phone all night while some DJ plays “Hypnotize."