Due to a misunderstanding, this is commonly referred to as Billy Corgan's favorite show. 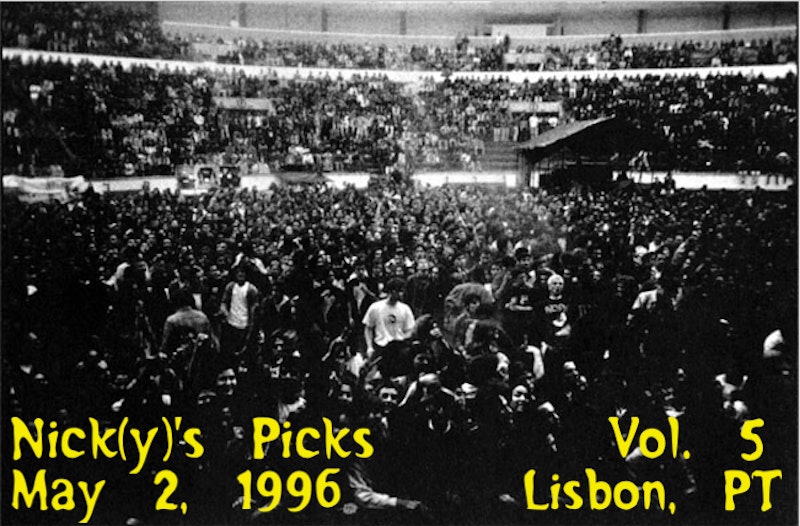 In an interview days before the “final” Metro show on December 2, 2000, Billy Corgan was asked by Greg Kot and Jim DeRogatis if there was a particular concert throughout their twelve year career that stood out as “magical, one that can never be recreated.” Billy offered two shows: one in Chicago in 1990 before the band was signed with several A&R scouts in the crowd, and this show from 1996 in Lisbon, Portugal. No recording circulates of that show in Chicago at the Lounge Axe, but there is this audience recording of that concert that was held in a bull ring during a rainstorm in Lisbon twenty years ago tonight. As Live Music Archive user tapedatshow points out, it’s a myth that Billy called this the band’s “best show ever” - under the circumstances, with only 700 out of 12,000 tickets sold days before the concert, he considered it a huge success and a pleasant surprise when the Cascais Arena was packed to capacity with same-day walk-up sales, and the crowd sang along to every song, no matter how obscure. Despite the crummy quality of the recording (subpar even for an audience tape), you can hear the crowd constantly singing along and cheering for MCIS deep cuts like “Muzzle,” “X.Y.U.” and “By Starlight.” User tapedatshow did a great job debunking the misunderstanding that this was Billy’s favorite show, I recommend his write up on the LMA page for this show.

Besides that myth, 5/2/96 is notable as a historical document because that night Jimmy Chamberlin and Jonathan Melvoin would suffer their second overdose of the tour, the first occurring in Thailand at the end of February. Melvoin died and Chamberlin was fired after a third overdose in New York City on July 12, 1996. From a September 1996 Rolling Stone interview with Billy Corgan: “The second, more serious occurrence was in Lisbon, Portugal, in May. Corgan says Chamberlin and Melvoin were both found unconscious outside a hotel by hotel staff and rushed to a local hospital for emergency treatment - ‘Adrenaline shots to the heart, the whole Pulp Fiction bit,’ as Corgan puts it.” Jonathan Melvoin was the brother of Wendy and Susannah Melvoin of The Revolution; from the same Rolling Stone piece: “According to Wendy Melvoin, her family was not told by either Jonathan or the Pumpkins organization of the Lisbon incident, a miscalculation that she feels might have cost her brother his life. ‘Mostly, I wish the wife had been informed,’ she says. ‘We don't hold anybody responsible for any of this. Jimmy, Jonathan, did this with their own hands. But at the same time, if we could have just been told, maybe we could have said something to him. Whether or not he'd be pissed off or humiliated because he got busted, I don't give a fuck. He'd be alive.’ The Smashing Pumpkins were not invited to Jonathan Melvoin’s funeral.

Recording Quality: D. Sounds awful on headphones, sounds pretty decent through speakers. The discrepancy is pretty stark. It’s certainly not the worst audience recording I’ve heard, but it’s pretty rough, and I don’t think it does the show justice at all. There are lots of glitches and phase issues, particularly during “Cherub Rock.” It evens out, and you can hear the band fairly well, and although you can tell the crowd is singing along, it’s weirdly hard to make out. This would be a much more compelling listen if the crowd was more audible, for once! I agree with tapedatshow that no one would talk about this show if Billy hadn’t mentioned it in 2000 and if the second overdose hadn’t happened that night.

Performance Quality: B+. Billy tells the crowd at the end of the show “Of all the concerts we’ve played so far, this is the best one we’ve had. Thank you! You guys are the fucking best.” I agree with tapedatshow that Billy probably meant of their European tour, and certainly not of their entire career. It’s a great performance aided by an enthusiastic crowd, but this recording makes it really hard to appreciate. It’s really only interesting as a historical document.

Setlist Quality: B-. “Farewell and Goodnight” is a standout, a song that was only brought out at the end when the band felt exceptionally good about how the show went. “Bodies,” the slow version of “Mayonaise,” and a 24-minute “Silverfuck” are worth hearing, but there’s nothing special here in terms of song choice. It’s a standard MCIS set, and besides “Bodies” and “Farewell and Goodnight,” there are no surprises here.