I’m Too Old to Boogie

Napalm Death, Melvins, Melt Banana, and an aching back. 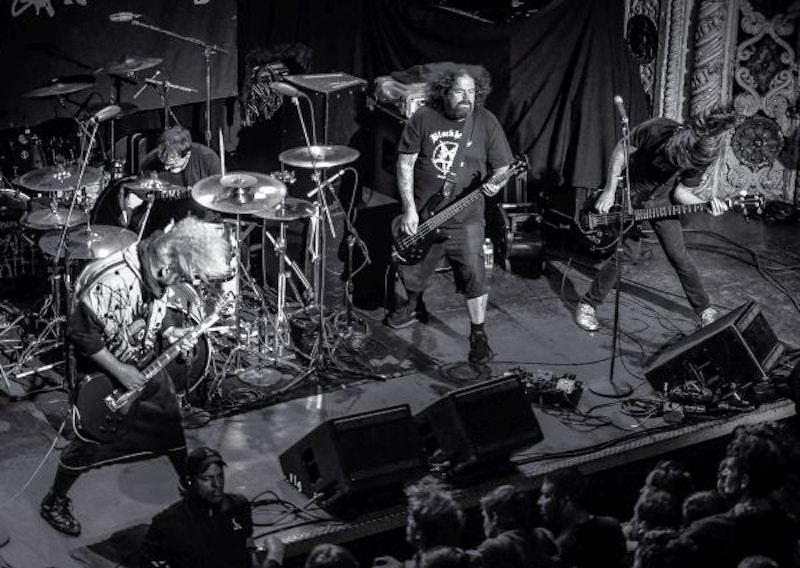 Rock's for young and sexy people. I'm middle-aged, shapeless and my swagger long ago shuffled off into a corner and expired. But nonetheless, last Friday, defying time and good taste, I joined a couple of similarly senescent (albeit less decrepit) friends and went on a rare excursion to a venerable Chicago music venue, where old rockers were playing old music for old people just like us.

The rockers in question were Melt Banana, the Melvins, and headliner Napalm Death—all bands that started two or three decades back. The crowd leaned towards the 30s and 40s, but there were some younger people milling about too, and the mosh pit thrashed and heaved with the invigorating aggressive testosterone of an angst-ridden youngster. And the bands? Well, they may have been old, but they were ready to rock!

Sort of. King Buzzo, the Melvins' frontman, came out resplendent in his poofy silver hair and foofy Sun-Ra-esque space tunic, and the image of frazzled grandpa Saturn sludge lord is hard not to love. But glorious visuals aside, the fact is that the Melvins' recorded output has tailed off in quality precipitously from their classic 1980s and early-90s work, and their live show reflects that. When I saw them 20 years back they were still thundering out giant drones of scratchy lumbering feedback brutal enough to slay a mammoth. Now, though, the drones are gone and so are the tight avant-garde song structures, replaced with much more conventional classic rock riffing. Dale Crover still hits the drum like he's cracking open the earth, but the giant detonation doesn't go anywhere in particular. The old Melvins sound less like the young Melvins than a decent grunge nostalgia act. You'd think they were inspired by Nirvana, rather than the other way around.

Where the Melvins have mellowed, Napalm Death has curdled. The grindcore band was always famous for its snotty political charge, but as it turns out snotty adolescent Marxism looks better coming from a snotty adolescent than a middle-aged dude. Vocalist Mark "Barney" Greenway's between-song patter moves from smarmy Vegas with guy-at-the-end-of-the-bar bloviating in a mixture that isn't as amusing as he thinks it is. I said to my friend, "He's going to mention Trump!" about five minutes into the set, and sure enough, he did, to the expected cheers. Nothings wrong with anti-fascism, and Greenway's death metal screams were truly impressively ear-rending. But part of what was invigorating about the message in the past was that the innovative mix of death metal and punk seemed urgent and new; the corpse worms wriggled lustily as they gargled, "You have nothing to lose but your brains!" as they battened on the bourgeoisie. Thirty years later, the same corpse worms don't have the same bite; you feel like they'd rather be home with the kid, sliding into the corpse bed at some reasonable hour.

And then there was Melt Banana. The Japanese band’s been around since the early 90s, and are sort-of legends in their own right. But at this venue they opened to a sparse crowd and played for only half an hour. How can I begrudge them the brevity? I’m getting old, too.

They sure didn't sound old, though. Last time I saw them (again 20 years back) they had a drummer, but they've dispensed with that. Now squeaking singer Yasuko Onuki wields a digital computer control to blast bursts of percussive bleeps while guitarist Ichirou Agata hammers out twisted hunks of sound which sound more like metal tearing apart than notes. The erratically shifting structures and short songs are still in place, but the duo has also, somehow, gotten poppier, with the end of the set turning into an amphetamine broken shoegaze sublime. While the Melvins and Napalm Death have heavily dug into their respective ruts, Melt Banana has gotten both dreamier and spikier, like all those years of throwing high volume acid in their ears has just carved new and better squiggles in their brains.

By the time the concert was done, my ears and back hurt, and I could barely straighten my knees. I staggered out, past my bedtime, grumbling, which is what you do when you're old. All the rock these days is boring and disappointing, except for Melt Banana. Those old kids can stay.