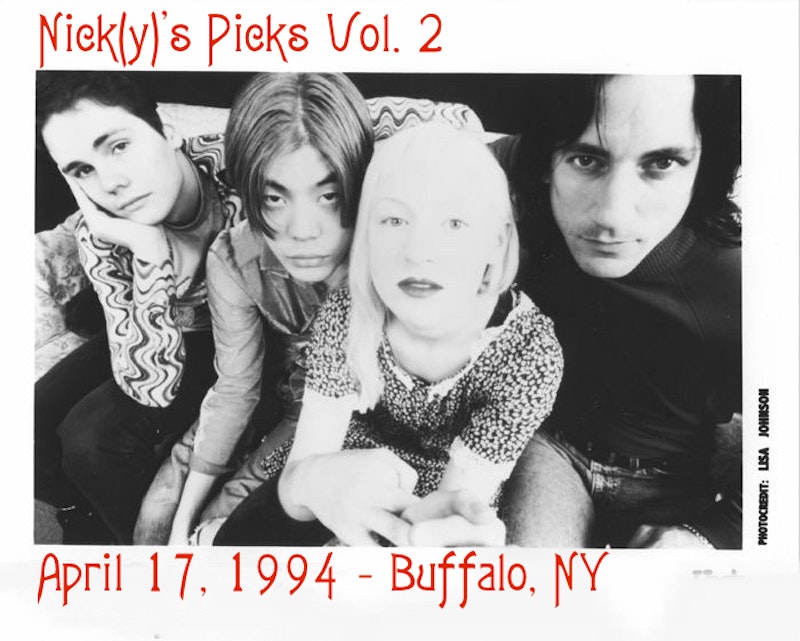 This is a strange show. If only there were video… As Billy is about to introduce “Soma,” someone throws a lighter at James. Throughout the Siamese Dream tour, the band was besieged by shoes, bottles, coins, and other heavy objects as they were playing. At this point, they were a year into the tour already, and frequently cut shows short at sixty or seventy minutes. That lighter must’ve been the last thing the audience threw at them, because not only does the band play four encores, they play two songs by request…I can’t think of any other SP shows were Billy actually takes requests from the crowd. Usually he berates them for shouting out song titles, but in Buffalo, they got “Rhinoceros” and “Bury Me.” The only other SP1 show featuring four encores was the “final” Metro show on 12/2/00. Billy is in such a good mood that he pauses during the middle of “I Am One,” when the rehearsed rant is supposed to start, and says “usually this is the part of the song where I say a bunch of angry shit, but I’m not feeling so angry tonight. Sorry…”

Recording Quality: C-. It’s such a shame that the only circulating copy of this show is a mediocre audience tape. It’s listenable, but if you’re not a superfan willing to listen to anything and everything SP1 ever did, there are dozens of other better sounding shows from 1993 and 1994. I don’t really mind, given the bizarre setlist and giddy mood of the band, but this is really only worth listening to for “Hello Kitty Kat” and Billy’s uncharacteristically cheery banter with the audience. Also, the tape runs noticeably slow.

Performance: A-. The band is in a really good mood, and even though it led to a really long and playful show, the anger and antagonistic nature of most of the other Siamese Dream shows is what makes them so compelling to me. I’ll cover it eventually, but my favorite show from this year is 8/6/94, the second night of Lollapalooza in New York. The previous night the band really blew it, abandoned songs, ended really early, and totally lost the crowd. I know Guy Werner was at that August 5th show and he hasn’t listened to the Pumpkins since. Well, the next night, determined to prove themselves, they opened with the “I Am One” rant version and just annihilated the crowd. Anyway, this show is unique because of what a good mood everyone is in (Billy even yells at James to get back on stage to play “Sweet Sweet”), but it’s not nearly as interesting as their confrontational, back-up-against-the-wall performances. Billy lets James start “Siva,” he abandons the scripted angry rant in “I Am One,” and throws in a dozen teases and unfinished jams throughout the show.

Setlist: A. The band plays every song from Siamese Dream except “Luna,” five songs from Gish, and a few B-sides. The most unique inclusion is “Hello Kitty Kat,” performed for the first time in thirteen months. “Hello Kitty Kat” is one of my favorite SD-era B-sides, and it very nearly made the album (there are promotional cassettes featuring the song sequenced in between “Cherub Rock” and “Quiet”), but after it was cut, they pretty much abandoned it, and after this show, they only played it live four more times (twice during Lollapalooza that summer, and again at two of the February 1995 Double Door shows). They close with a half-hearted cover of “Stay with Me” by Rod Stewart and the Faces, while Billy laughs at a tired security guard who just wants to go home… Otherwise, it’s a pretty standard run through of the Rock Invasion Tour setlist, until the encores…

If you want to hear the Pumpkins happy for once, check this out, otherwise, it’s only interesting for the encores and chatter, banter, and jokes…Props to the crowd, because they must’ve been REALLY well-behaved after that one lighter was thrown.