Grunge came and grunge went, but the Melvins remain. 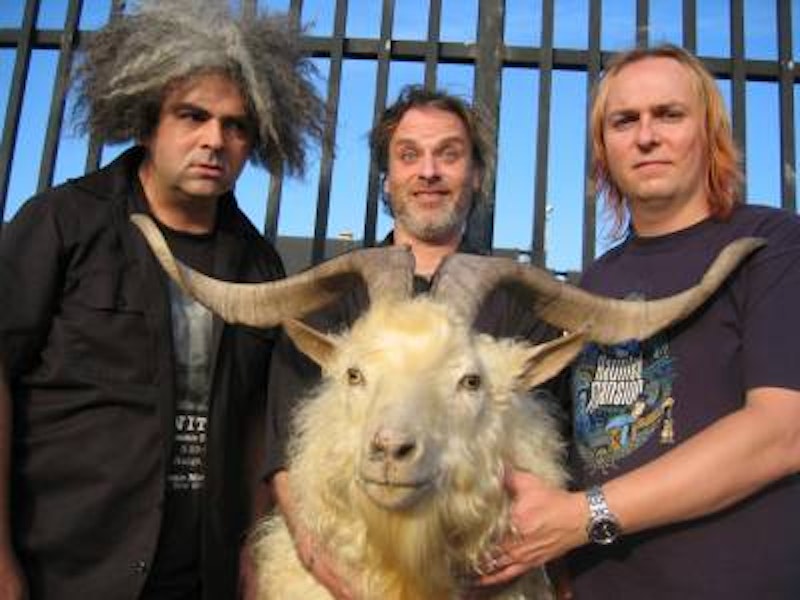 I'm one of those people who didn't hear about the Melvins until after Nirvana had explained that they were the shit.  As a result, the two bands are linked in my head. Kurt Cobain shot himself a good long time ago, and I overplayed his albums so thoroughly that I can't even listen to them now.  Still, when I think about the Melvin's, I can't help but get a little nostalgic for that other band I loved back there in the 90s when I loved the same thing as everybody else.

None of which is really fair to the Melvins, who were always a much more creative outfit than Nirvana — as Cobain would be the first to acknowledge, I think.  It's also misleading since the Melvins were around well before Nirvana, and have persisted long after. The band was formed in 1983, which means that they're almost three decades old now.

The Melvins' latest, Freak Puke, doesn't exactly break new ground for them — but it also doesn't sound anything like a nostalgia act.  Partially that's because the Melvins were never big enough that their moves became a cliché. Their early albums are amazing, but they don't show up on best of lists, which means that the band doesn't have to fight their back catalogue the way indie giants like Sonic Youth or REM have had to.  Partially, too, the Melvins have managed to avoid musical calcification because they always had more than one schtick.  On Freak Puke, for example, they're less full-on-doom-sludge, less avant-experimental-weirdness, and more dirty grungy rawk. Indeed, Freak Puke hearkens back to their one major label effort, 1993's fantastic Houdini.

The main reason that the album doesn't sound dated is simply that it kicks ass.  Longtime members guitarist Buzz Osborne and drummer Dale Crover and sometime bassist Trevor Dunn have put together an amazingly thick sludge of testicle-cleansing hooks.  But while the Melvins are definitely riding in on the same brontosaurus as Sabbath or Aerosmith, they still manage to get that Saurian to stumble about to some bizarre bop heads.  "Worm Farm Waltz" is Charlie Parker getting buried in cement — until the abstract, spacy bridge, which sounds like the Sun Ra orchestra if the Sun Ra orchestra had employed Dale Crover on drums.  And yeah, I tried to think of another metaphor there, but the fact is, that nobody sounds like Dale Crover.  Even John Bonham doesn't pulverize the skins like he does.

Anyway, that's basically the album; track after track mining the unexpectedly fertile ground between dirty 70s classic rock and avant jazz.  "Mr. Rip Off," the opening track, starts with quiet bowed bass and spooky chalk board squeaks before staggering seamlessly into a distorted trudge, as if Webern was always meant to play arenas.  "Let Me Roll It," on the other hand, is totally, gloriously sold out kitsch — the kind of trashy, self-parodic testosterone swagger that Gene Simmons lived for, complete with stoopid half-failed double entendres. "You gave me something that I understand/you gave me lovin' in the palm of my hand!" Buzz Osborne bellows while Crover smashes a beat that's just about two times too slow.  When they declaim "Let me roll it to you," it's like watching the Hulk dressed as Vegas Elvis thrusting his crotch while he pushes a square boulder towards the massed groupies.

All of which suggests that the Melvins are the band Nirvana might have been if Nirvana was the sort of band that could name itself "The Melvins."  Kurt Cobain certainly had an irreverent sense of humor…but it was irreverent, not absurdist.  When Nirvana moved away from its core pop-punk-metal remit, it did so by covering Leadbelly or singing about how Jesus didn't want them for his sunbeam — a different take on angst and realness, in other words, but still angst, and still realness.

The Melvins, in contrast, were always already sold out —punks who spent all their time pretending to be doom metal or glam rock or some sort of jazz weirdos. They're a gimmicky band — the cover of Houdini, with its adorable cartoon two-headed puppy, is a nice summation. But being true to your gimmicks can be its own kind of integrity. Thirty years on and you can still hear the Melvins giggling like fifteen year olds when they put "puke" in their title or end their album with a thoroughly annoying beeping sound-effect loop.

Grunge came and grunge went, but the Melvins remain, still quietly making the best loud music on the planet.