It's All Torment and Disappointment

Will Billy Corgan ever be relevant again? 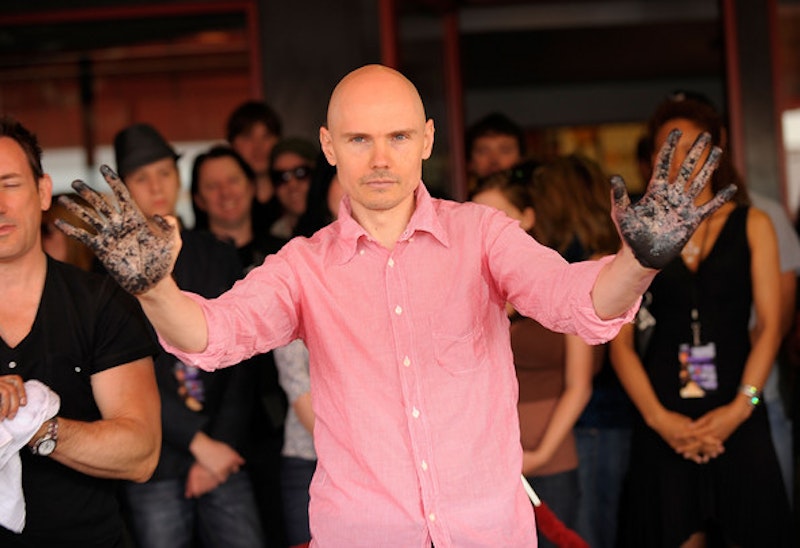 “Because I’m not a fucking whore like you.”—Billy Corgan (to a photographer), MTV Video Music Awards, 1994

The Smashing Pumpkins, since their 2007 reformation, have been a sick, three-legged dog. It’s not that Billy Corgan’s the only remaining original member (his old rival Trent Reznor never seems to get shit for stiffing his live bands in the studio); their shows are still consistently great; and his ambitious one-song-a-time concept song cycle Teargarden by Kaleidyscope, released for free, one song at a time, should’ve been a hit in the wake of In Rainbows, The Slip, and an infinite sea of free Bandcamp albums and EP’s. It’s obvious to everyone but Corgan that a few things have obscured the Pumpkins’ past and present recently: mainly, the songs have been crummy. The grandeur and melodrama that elevated Mellon Collie to the pantheon just sounds stupid when it’s draped over lame songs like “A Song for a Son,” “United States,” and “Lightning Strikes.” The production is gaudy, verging on unlistenable at times. Perhaps most repellant to any new or casual listener is Corgan’s high, whiny voice, warbling with schmaltzy vibrato and sitting on top of every mix, dry as a bone.

None of his post-2000 albums—Mary Star of the Sea, TheFutureEmbrace, Zeitgeist, or the first dozen Teargarden tracks—have been truly awful. But even compared to the Pumpkins’ much-maligned final effort Machina, the last twelve years have been depressingly mediocre. But Corgan’s Fools’ Journey might finally be on its way up: Oceania, the first proper Pumpkins album in five years and a part of the Teargarden cycle, is by far the best thing he’s done since the dour Machina records over a decade ago. Zeitgeist was way too metal and agro for its own good; but Oceania is a guitar fetishist’s dream. Every guitar part on this record sounds incredible; crystallizing everything about that warm, creamy, dreamy, wet, and vividly colorful tonal guitar world that everyone still loves about Siamese Dream. From the phased out, clangy intro “Quasar,” to the Beatles-esque “The Celestials,” video game synths on “Violet Rays,” classic Big Muffed to oblivion riffs-as-songs like “The Chimera” and “Inkless,” to the surprisingly affecting hymnal conclusion “Wildflower,” Corgan presents his most varied and sonically endearing record since Mellon Collie.

It’s a shame the songs aren’t better. Even most of Oceania’s choice cuts—“The Celestials,” “Pale Horse” (a quietly sad, wistful follow-up to “For Martha,” another love song to his late mother), “Quasar,” “Panopticon” (the closest a Pumpkins riff will ever come to salsa), and “My Love is Winter”—can only crane their necks to the heights this band used to soar. There is no “Porcelina” or “Ruby” moment here, when everything beautiful, sad, happy, heavy, and grandiose about the Smashing Pumpkins comes together in a perfect swirl of intense emotion, guitar heroism, royal melodies, shimmering phasers, and enveloping distortion. The closest Corgan comes to transcendence is the title track, a nine-minute three-part suite about his on-off girlfriend Jessica Veronica (they’re now engaged), and it’s the most painfully honest and sincere song he’s written since “This Time” lamented the original band’s disintegration over 12 years ago. Corgan’s songwriting is still comparatively weak (to himself and what his peers are doing now), and those vocals are still too damn dry and loud, but sincerity and a humbled attitude adjustment are just what this band needs. If you’re a Pumpkins fan burned by years of so-so albums and songs, Oceania will get you back on board.

Continuing to follow an artist that’s done nothing but disappoint, mock, and complain instead of recognizing his own mistakes and weaknesses, is a little psychotic, yes. But that’s what it means to be a Smashing Pumpkins fan. We’re all on the Fools Journey with Billy, for better or worse. With any luck, by the time Teargarden wraps (supposedly next year, with SP’s third double album), Corgan will be in the right place to melt faces and hearts again instead of just trying to get their attention.