Between the Mundane and the Spiritual

A conversation with Carly Ptak of Nautical Almanac. 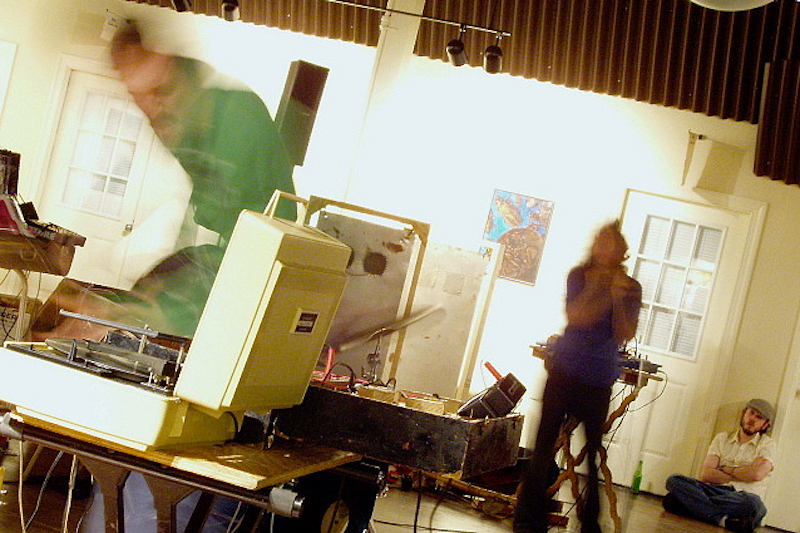 Nautical Almanac albums, group and solo alike, tend to suggest the end of the world as we understand it: unspeakable, unspooling, tumbling into insanity. Talking solo adventures, Twig Harper’s sides mulch together melodies and samples until they’re psychosomatic pate, while Carly Ptak’s sides generally dip in and out of recognizable audio pollution while reliably erring on the side of inscrutability. This is not Eric Copeland-esque pop experimentation; this is rougher stuff altogether.

Ptak’s evolution as a soloist has been interesting. If 2002’s Prepare Your Self offered a patchwork quilt of noise cut with pop-culture signifiers, 2004’s Both cut up the outré with a series of trippy interrogatives. Wonder Now (Heresee), her latest LP, sets out a tray of amuse bouche oddities of varying textures on Side A before ushering the listener into Side B: a 2o-minute whirligig titled “All Ways Different” where Ptak, a licensed hypnotherapist, comforts, reassures, and theorizes, many and sundry phrases and exclamations and consolations cycling in and out of one another at uphill-unicycle speed. It’s arguably her most utilitarian and personally direct LP, and over an email interview that spanned several weeks, which included a nationwide Nautical Almanac tour, she opened up to Splice Today about it.

SPLICE TODAY: I know you work in the field of hypnotherapy. Was Wonder Now influenced by that, or imagined as an extension of it?

CARLY PTAK: “All Ways Different” is a track that I created by layering eight different hypnosis recordings that I made over the span of four years. In the track, there is a non-linear merging of different word flows as they move across the listeners (sub and super) consciousness. This track is a reflection of my general approach to life. In everything that I do I believe it is helpful to be as integrated as possible. Creative endeavors, career, relationships and personal choices all overlapping to create the wholeness of Me, just as I overlap with Everything to create the wholeness of All.

ST: What drew you to hypnotherapy as a profession?

CP: I came hypnotherapy in a couple of ways. First was my frustration with performance. I got to a point in about 2005 where I was very dissatisfied that the audience did not seem to be willing or able to go as far as Twig and I were ready to go. By "going," I mean into otherworldly states, alternate dimensions, and intense awareness of the moment.

Around this time in my life there was a lot of upheaval. Max and I stopped seeing each other, Twig was worn out from the stress I had instigated, and we had a house fire due to these things and more. Rather than expressing my emotions, I channeled my energy into physical pain. Once I finally realized this, I started looking in the phone book for a hypnotherapist. Then I had a literal light bulb moment of "I don't want to go to a hypnotherapist, I want to be a hypnotherapist." Within two months I went to an intensive training in California and have been practicing ever since.

ST: In learning to help others, does it seem that you've healed yourself?

CP: The word "heal" is quite complex. I tend more toward words such as: accept, process, change. As I have a learned to inter-mingle my path with others, I have expanded my own perceptions a great deal.

ST: Twig expressed something similar to me a few years back, about the difficulties in getting the audience fully on board with Nautical Almanac. Do you feel that you've found a solution to that issue in performance?

CP: Every audience, every performance is a totally different situation. The solution is found each time, or at least the attempt is made to find it. Playing and performing is still a puzzle to us in many ways. We both like a good puzzle, but there is frustration built into the situation.

One part that is really confusing is that the level of venue has not changed for Nautical throughout the years. As we are currently on tour we are still playing basements and barely getting any "donations." On the one hand, we know that this is a gift; we are that band that cracked open the minds of many a young person and have had the honor of doing so for the last 19 years. On the other hand, it is difficult to understand why we are rarely included in the world of paid music or art. In our entire career we have only ever been flown somewhere ONCE, and only ever had a hotel paid for ONCE.

It can be a hard pill to swallow sometimes, knowing that we enjoy a great deal of respect from others, but reaping very few of the rewards generally associated with that. As Twig puts it, "We are still planting the seeds." We watch them grow and flower, and it is a joy, yet we are still unclear as to the fruiting process. That mystery may be what still draws us; it is beautiful, but we do get lost sometimes. The name Nautical Almanac is meaningful; we do navigate uncharted territories using our inner light and the outer cosmos as guides.

ST: Let's talk a bit about Side A of Wonder Now. I hear the songs there as preparation or conditioning for Side B. Were they created with that sort of intent, as a set up or series of stages designed to heighten the effect of "All Ways Different"?

CP: To me, the two sides are completely different. I mostly listen to LPs and generally only listen to one side and then I move on to something else. My attention span for any one type of music is pretty short. Ideally, “All Ways Different” should be listened to with intention and a readiness to focus and relax, which is not as necessary when listening to the music side. I like the idea that the songs prepare or condition the listener for this experience, but I did not consciously intend it to be that way.

I believe very strongly that music is a means of communication between the mundane and the spiritual. As such, I prefer it to be as selfless as possible, surprising, and a journey of discovery. I have a specific way of recording songs that, for me, maximizes these things within each part of the process. First, I tend to push instruments and microphones outside the limits of their ability. For electronic instruments this means hotwiring them such as the Omnichord on the “Infinity of Finiteness”—it is the only instrument played on that song. When I play that instrument, and all of the instruments I make, I don't really know what sound is going to happen when I make a patch or flip a switch. That's why it's fun!

For acoustic recording, this often means pushing microphones into the realm of warping the sound by being too close or loud or causing popping and clicks. You can hear this with the bells on “The Finiteness of Infinity.” When I was playing and recording those bells, I had no idea what it actually sounded like because the location and sensitivity of the microphone made the recorded product so different from what I was hearing. In actuality as I recorded the bells, I was in a very echo-y room and the cascading vibrations were doing crazy shit to my ears which I have never heard on any recording.

Music in the moment is completely separate being from music recorded; in recognition of this, I utilize my tools to find a new form. As this unfolds, I create a conversation with spirit by giving the instruments a voice that is outside of the realm of what they were made for. This voice is what I am looking for and listening to, and I find it much more pleasing than listening to myself.
Second, on almost every solo song I have ever recorded I play each track blindly without listening to or playing along with the other tracks recorded for that song. I recorded my first album, Prepare Your Self, on a four-track stereo reel-to-reel and this lack of trying to sync up/control the sound made that spiritual connection palpable to me. I love the unexpected rhythms and cycles that occur naturally within my playing and the instruments themselves and only show themselves at the end. It's like paying attention to your own breath. The mixing process also becomes very important and I always do it with a manual mixing board. That way I can barely keep track of which track is which so even the mixing becomes slightly out of control. This often creates songs that are deeply disconcerting and difficult to listen to for me, but I enjoy a visceral reaction of almost any kind so I just go with it.

ST: What are some artists, albums, and music that bring you joy or peace personally?

CP: This is a question I have always found very difficult to answer. When I was little I used to rotate all of the stuffed animals on my bed so that each one would take turns getting a prime spot. Maybe it comes with being a Libra. I have so many incredible contemporaries that I hesitate to name any one because then 10 other names pop into my head and I just get confused. I will simply say that I feel inspired constantly and love to check out all the different scenes in Baltimore and beyond.