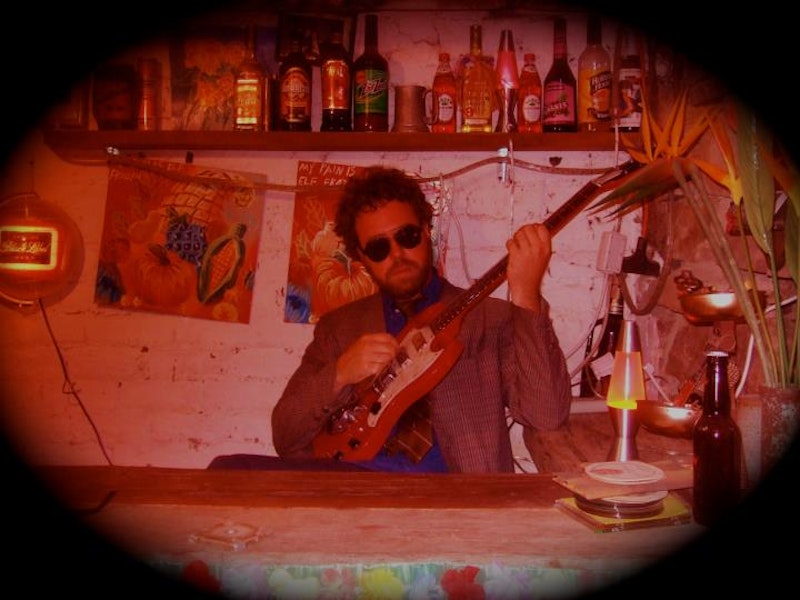 Indie-rock doesn’t get much more low-stakes than Marble Valley; thank God their amps are still blazing. A limited audience, a disinterested press, and low overhead allow front man Steve West and a motley crew of characters—including fabled Pavement soundman Remko Schouten—to dad rock out with their crooked ids out, indulging a bottomless penchant for deadpan puns, taffy-jam synth runs, and bar-bait guitar scrape. Last year’s Breakthrough (Sea Records) keeps the group’s perpetual/conceptual beer bash alive, even as West leavens his bemused free-association with shades of mortality. The likelihood that Marble Valley is enjoying life and elevated decibel levels more than you always seems roughly about as high as the band pretends to be.

I emailed West about Breakthrough and how Marble Valley songs take shape.

Splice Today: How was the Pavement reunion tour for you?

ST: Your most recent album is entitled Breakthrough. What inspired that name?

SW: It’s a bit of a pun, since this is the fifth CD we have made. Our guitar tech, Matty Wall, kept calling it “the breakthrough” when he observed me working on it.  It stuck.

ST: Tell me a bit about how a Marble Valley song takes shape, how it moves from idea to actuality. These days your role in performance is mostly vocal, but early on, did you play instruments?

SW: The songs take shape in two ways. One method derives from the jams we record together in the studio. I take what I like and build a song out of it using the studio as my instrument. I’ll cut and paste and create a song using the wonderful world of plug-ins at my disposal. Then I’ll bring it back to the group to polish it up as a realized song.

The second method would be the solo studio song. I bring a song I’ve recorded on my own to the studio and the guys perform over what’s created. Usually we keep my drums and a keyboard line, and the rest is replaced by the each member’s individual performance. On Breakthrough, about half of the songs were created from the jam method and half from the solo studio method. The first few CDs, I did play most of the instruments in my own primitive colorful way. The past few Valley CDs, we’ve all played an integral role in the creative process. I am very fortunate to have a wealth of varied talent to draw from.

ST: On Breakthrough, what would be an example of each method?

SW: “Sweet Compression” would be the jam method. I took the jam we recorded at Island Studio in Holland and created it back stage at Millennium Park in Chicago September 2010. When the room was empty after sound check, I sang the rough lyrics and assembled the song.

An example of the solo studio method would be “We Roll.” I recorded that as a full song at home in Virginia, and I brought it to Hull, England where the boys re-did the guitars and bass and sang backing vocals and played percussion.

ST: How did you come by your carpentry and masonry skills?

SW: In the 1990s, I bought an old Greek Revival House, built in 1851. I’ve been restoring it ever since. I also started working with a stonemason after Pavement broke up and learned the trade. In this economy I moonlight as a mason disguised as a carpenter. The masonry work around here has dwindled for the time being. Things seem to be picking up, though. In the down time I have been reconstructing an old log cabin in my back field.

ST: This is going way back, but was your scatted intro on "BBQ Lungs" inspired by anything in particular? It always reminds me of Boss Hogg on The Dukes of Hazzard, how he'd get all het up about something and start cackling about something.

SW: “BBQ Lungs” was about a bar in Williamsburg, Brooklyn. It was pretty old school rough; mafia payoffs and such. The kind of place one would get busted in the 80s TV show Hill Street Blues. Stephen [Malkmus] and I and our girlfriends would go to this bar—real name was the Turkey’s Nest—when we wanted a change of pace from the trendy bars in Williamsburg at the time.

ST: What was the first Marble Valley song you wrote, and what was the experience like? Did you bring any of the early songs to Pavement?

SW: “Food Coffee Cocktails Party.” Remko and I came up with the chorus chant in the van on our way to the Lollapalooza festival outside of Seattle, Washington in 1995, I think. I wrote the rest in my home in Virginia months later, after my honeymoon. I never brought any songs to the Pavement table. That was Scott and Stephen’s job at the time.