She likes to keep herself mediocre. 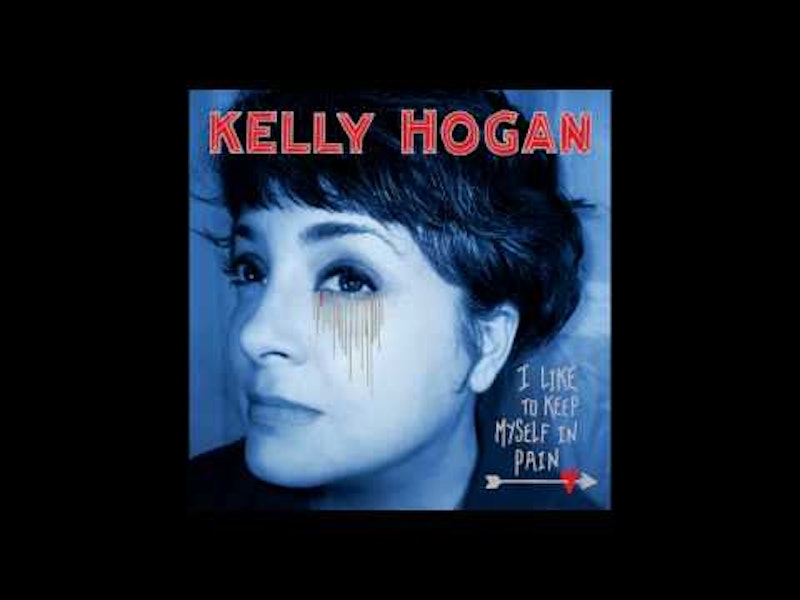 I've only seen Kelly Hogan live once, but it was a lovely set. It was some years back and she was performing with various other Chicago staples at the University of Chicago. It was an extremely relaxed date; the performers took requests, and one or two audience members even joined in. The high point for me was a low-fi cover of the George Jones/Tammy Wynette classic "Golden Ring"—stripped of Billy Sherrill's slick production, but with those heavenly harmonies as right as ever.

I'd hoped to re-encounter some of Hogan's easy charisma and country smarts on her latest release, I Like to Keep Myself In Pain. And I suppose there are flashes of both audible here and there. "We Can't Have Nice Things" has some of George and Tammy's vivid, sublimely corny detail; "Step around the wedding presents we're returning to the store," is the nice first half of a couplet, even if the second part disappoints ("The lamp beside the window isn't burning any more"— yeah, okay.) "Sleeper Awake", on the other hand, is more Abba or Camera Obscura than Conway and Loretta. It's all soaring upbeat winking, from the snapped Motown crib from "You Can't Hurry Love" through Hogan's mewed vocals.

There's nothing wrong with mewing, or for that matter with Abba, and if Hogan wanted to be the country Camera Obscura, I'd be thrilled. The problem is that she doesn't want to be that, and moreover, it's hard to figure out what she does want to be. Not that the album's an eclectic mess. It's more a tentative, drab splotch. Each song on the album was written for her by a different person—"Sleeper Awake" is by John Wesley Harding, for example, "We Can't Have Nice Things" is by Jack Pendarvis. Stephin Merritt ("Plant White Roses"), M. Ward ("Daddy's Little Girl") and Robyn Hitchcock  (the title track) are probably the biggest names… but big or small, everything fades into the same bland nonentity.

Part of the problem is the backing, which squats determinedly in that lacuna of inspiration between roots authenticity and pop slickness. The tinny derivative bar-band slogging, complete with inevitable over-carbonated drums, turns the final blooze set piece, "Pass On By" into a sub-Bonnie-Raitt exercise in humiliating self-parody. On the other hand, Gabriel Roth's "Slumber's Sympathy" with its precious chiming clock effects, could have sold me if it was willing to embrace its tweeness with the tastelessness of, say, the Carpenters or Ryan Leslie. But the polish isn't quite there, and so you just get diluted saccharine without the excruciatingly painful pleasure of diabetic shock.

You can't blame everything on the backing musicians though. The uncomfortable truth is that Hogan's singing here is just not all that involving. She certainly has chops—there are some impressive hog-calling yodels on "I Like to Keep Myself in Pain," for example. But she doesn't have the rich, beguiling tone of pop/country/torch singers like Patsy Cline or k.d. lang, nor the personality and charisma of a Loretta Lynn or June Carter, nor the cunning of a jazz singer. In short, she's boring. I would love to love "Golden," Hogan's own generous song to her collaborator and friend Neko Case. But there's not enough passion in the vocals to generate indifference, much less affection. When she declares, "With all my heart, I wish these things for you," the little quiver on the word "heart" seems so thoroughly predictable she might as well be reading it off a teleprompter. And let's move quickly past her overstrained, utterly unconvincing turn as a femme fatale on Vic Chesnutt's "Ways of This World."

There's no real surprise here; lots of great live acts have trouble making decent albums. What Hogan really needs is not a bunch of guest songwriters, but a guest producer—someone who’d give her a sound that's a sound, and not just a default setting. Ryan Leslie is probably out of her price range, but maybe Bobby Bare Jr. could be drafted? I can dream anyway… and in the meantime, though I'd happily catch her live again, I'll stay away from her albums.