The lone 7" by The Tower of London displays their tense interplay of bittersweet melody and jagged aggravation. 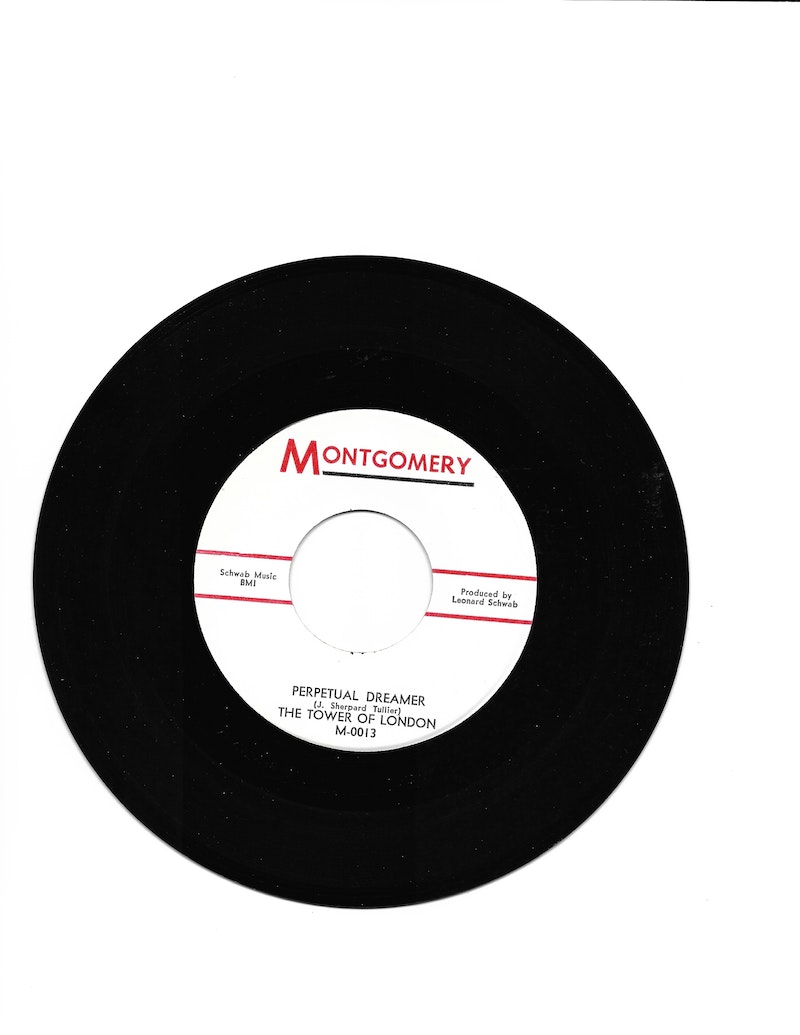 By early-1966 The Tower of London were focusing all creative energy on rehearsals, gigs, and original material. This period also found them going into the studio for the first time. The session was done for Dome Records. Shep Tullier and the other members can’t recall exactly what was recorded there or what circumstances led them to the east Baltimore studio. Whatever the case, no Tower of London release has ever turned up bearing the Dome label (any tapes containing their Dome tracks are MIA).

Around the same time, they began sharing gigs with popular Annapolis soul group The Avalons. Leonard Schwab Productions (LSP), an entertainment dynasty run by DC-based impresario Schwab, represented this flashy horn-driven ensemble. While only in his early-20s Schwab promoted concerts, managed and booked artists, and ran his own music publishing company. Some of DelMarVa’s wildest teen talents worked with Schwab and he cut records for them as the proprietor and chief producer with his own Montgomery Records label. The Tower’s dynamic style inspired the entrepreneur to offer them a place on the LSP roster.

Impressed by The Avalons’ local success, the kids from St. Mary’s agreed to let Schwab work as their manager. Though their base of operations remained in Anne Arundel County, with LSP gigs became steadier and their appearances immediately began attracting bigger crowds and bigger paychecks than what they’d garnered as a DIY act. Schwab’s influence also got them into a Maryland musician’s union; this landed them jobs at more legit venues like bars and night clubs, including their one and only gig in Baltimore city (at an 18+ establishment; the bar’s name has since been forgotten).

Montgomery had top-notch regional competitors: Ru-Jac and Dome from Baltimore; Aberdeen, Maryland’s C.E.I.; Gama and Vermillion from the DC area, and Ken-Del and Richie from Delaware. These labels all had significantly larger outputs than Montgomery, but no other DelMarVa imprint was as consistently awesome or interesting as Schwab’s.

On August 31st, 1966 The Tower headed into DC’s Edgewood Studios to record for Montgomery. This was the site of numerous legendary sessions that featured the cream of DelMarVa music. Most notably, the studio hosted productions overseen by producer/engineer/garage punk god Tom Guernsey of The Hangmen. Despite Guernsey’s impressive pedigree, Schwab served as executive producer for The Tower’s fiery analogue tirades. These two songs comprised Montgomery’s best and rarest single.

On the flip the band sticks to the trifecta of jangle, dissonance, and blaring organ, but trades the B-side lyrics’ aggro-melancholy for social alienation as they tear into the UK-only version of The Who’s “Substitute.” The Who’s mod rock standards were a big part of The Tower’s live set and the original “Substitute” held special meaning for them as the song was one of the only Who records never distributed in the US during the 1960s (it came out overseas in 1966, but wasn’t issued domestically until the 70s). Racial segregation was then still controversial in America, so The Who’s US label Atco believed a lyric from the UK-version (“I look all white but my dad was black”) could stir up trouble and consequently forced Townsend and co. to re-record the song with new lyrics for its stateside release. Add Maryland’s complex civil rights history to the equation and you get a backdrop where few moves could be bolder than bashing out a kick ass tune with a direct reference to interracial love.

“Substitute” b/w “Perpetual Dreamer” got a few spins on Annapolis’ WYRE-AM soon after its early-1967 release, but the single’s biggest push came thanks to Leonard Schwab’s effort to get The Tower of London national exposure. A station in San Bernardino, California had “Perpetual Dreamer” in regular rotation for several weeks. This airplay caught the attention of Dick Clark and American Bandstand. Clark arranged to have “Perpetual Dreamer” reviewed on national TV during the competitive "Rate-a-Record" segment of an AB episode that aired in the summer of ’67. The Annapolitan folk punk monster scored big, but it came down to a tie; “Perpetual Dreamer” shared its victory with The Chambers Brothers’ psychedelic opus “Time Has Come Today.”

The hippie movement soon took off as a major influence on youth culture. By the end of 1967 Tullier and guitarist John Rausch were all that was left of their band’s original line-up. With high school graduation and college on the horizon, a break-up was inevitable. Regardless, patchouli-soaked progress and “real world” commitments couldn’t demolish The Tower of London.