Is “Red Dress” an Internet joke or an avant-garde triumph? 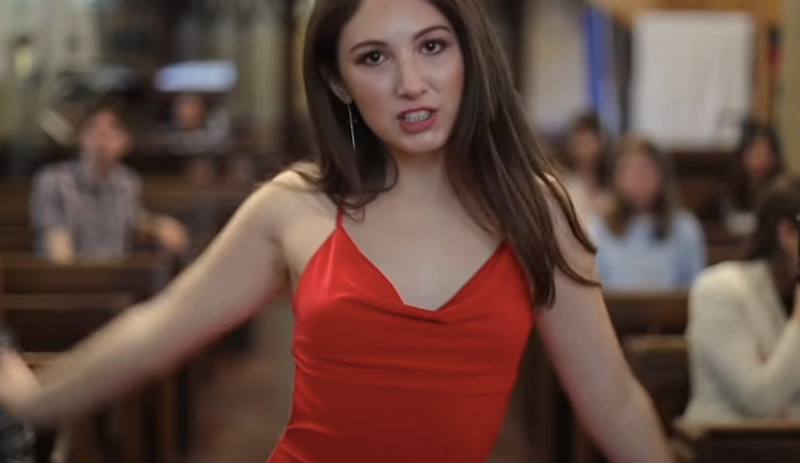 Today, the 1960s all-girl rock band the Shaggs are revered as outsider artist musical geniuses; their off-key singing and idiosyncratic approach to rhythm have been praised by alt-rock royalty from Kurt Cobain to Wilco to Daniel Smith. When they first recorded, though, they weren’t praised as musical innovators. Jeff Landrock, the engineer who recorded their second album, described the experience as “quite horrifying.” He hid his involvement for years because he feared it would harm his career. “I didn’t want people to know I did that,” he told Blurt ruefully.

I was instantly reminded of the Shaggs—both their style and their reception—when I saw Sarah Brand’s viral video, “Red Dress.” If you’ve heard the song, you know why. Brand—who wrote the song and directs the video—is probably a worse singer than me, which is an extremely low bar. She performs with a wavering, off-key, sad little warble as she declaims lyrics about sin, lust, and the hypocritical horror of her peers.

They see me in a red dress, hopping on the devil fest

Thinking of lust, as they judge in disgust

What are you doing here?

Brand dances and thrusts her way around a church set in a manner that’s almost as excruciating to watch as her voice. The video is only about three-and-a-half minutes, but it feels like an hours-long endurance test. If you can get through the whole thing without wanting to hide under a couch, you’re a tougher media consumer than me.

Lots of people mocked Brand on social media; the kindest reactions expressed a kind of bemused sympathy. The AV Club wondered how “something so obviously horrible was made without Brand understanding what she was doing.” Liz Kocan at Decider cheered Brand for exactly that lack of self-consciousness. “Look, we can all watch Brand’s video and have a laugh, but also, let’s watch the video and applaud her, too, for being someone who’s just f—ing going for it.” The best one can say about Brand is that she’s impervious to other’s opinions about her terrible music.

In short, Brand has a unique vision—which is also what people say about great avant-garde artists. More, Brand’s incompetent performance is in line with experimental traditions of deskilling, in which artists abandon traditional markers of technical competence. Jackson Pollack splattered paint on a canvas, prompting lots of those not in the know to sneer, “My child could do that.” Duchamp turned a urinal upside down and said, “That’s art.” Yoko Ono made a film which was just a collage of her friend’s butts. And the Shaggs sang songs about “My Pal Foot-Foot” which took the punk “I don’t know how to play my instrument” ethos to extremes of apparently clueless tone-deafness.

Free jazz, extreme metal, harsh noise wall—there’s a lot of music that wants you to run away rather than to hum along. Brand seems to be working in a nominally more welcoming pop idiom. But “Red Dress” is also directly about people not being welcoming at all. Part of the genius of the video is that the other people in the church with Brand gaze at her with a mixture of disgust and horror which perfectly reflects the disgust and horror of viewers. Brand’s red dress is a symbol of sexual deviancy, but it’s also a symbol of aesthetic deviancy. She’s created a song about stigma which just about forces you to stigmatize her.

So is “Red Dress” a good song? It’s bizarre and entrancing, which I associate with some music I like. And like John Cage and a lot of contemporary new music composers, it actively forces you to question your aesthetic preconceptions. Does a good song need to be intentional about the reactions it provokes? Does it have to fit into certain conventional key signatures? Does it need to be pleasurable? Brand stands up in the church of music and fucks with you. That’s at least one definition of great art.