The Tower of London of Annapolis

The "Annapolis sound" and the group that filled in for a marching band at the US Naval Academy in 1965. 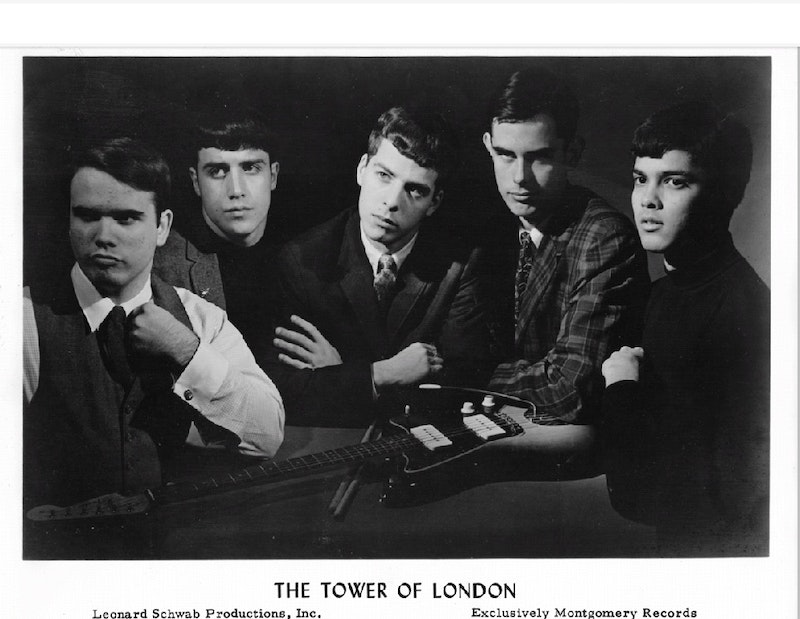 Annapolis’ teen rock scene produced some of the most creative energetic outbursts of the Vietnam era. Some of the area’s major early rock recordings include the singles “(Tiny Little) Seeds” by The Persuaders, “They Threw Sticks And Stones” by The Nunsuch, “I Can’t Believe” b/w “Let Me Say Now Love” by Something Else, Cherry Pink Reason’s “In A World Of Our Own,” and “Perpetual Dreamer” b/w “Substitute” by The Tower Of London. Much like the lo-fi works from nearby northern Virginia, the Annapolis sound was a blend of earthy folk melodies, jagged rhythms, and aggressive volume. This approach characterized the region’s music into the 1980s, most notably through the emo sound of Moss Icon, Freak Beans, and The Hated. Emo’s melodic dissonance remained popular throughout the 1990s and 2000s. Today echoes of DIY emo and teenbeat sounds can be heard in the work of indie singer/songwriters, post-rock bands, and other outré artists.

Sparked by pop fads, ambitions of stardom, and raw teen energy, Annapolis’ 1960s rock movement rose organically from the era’s cultural zeitgeist. Of all the revved-up Annapolis combos to form in the wake of the British Invasion none could touch The Tower Of London. Today’s music fans would use the term “folk punk” to describe this quintet’s jangling 12-string roar. However you label it, their wild recordings and performances formed a high point of DelMarVa’s teen rock legacy.

At 13 Shep Tullier had just entered St. Mary’s Catholic School. The pre-Beatles era folk boom was in full swing and the airwaves were ruled by clean-cut acts like The New Christy Minstrels and The Chad Mitchell Trio. Tullier was gifted his first guitar by classmate Joe Yanovitch who also gave Shep some informal guitar lessons teaching him folk songs popularized by Mitchell and the TV program Hootenany. This was a nationally broadcast show that featured live folk music concerts and sing-a-longs recorded at colleges and other venues all across North America. One episode featured performances taped at The US Naval Academy, only steps away from the neighborhoods where Tullier and Yanovitch lived with their families.

By the summer of 1963 The Ventures and the surf music craze were as popular as the folk scene. This prompted more kids from St. Mary’s to begin staging informal jam sessions including guitarist John Rausch and drummer Mike Elliott. Rausch and Yanovitch were among the school’s most skilled guitarists, so when all four students finally started playing together the novice Shep then switched over to bass. He plonked out twangy root notes on a conventional guitar strung with bass strings before eventually upgrading to a Fender Precision. According to Tullier, once the quartet “started to sound like a real band” it was time to start playing gigs. Billed as The Torquays, their anthemic melodies and surf-powered crunch electrified barbecues, school dances, and basement parties throughout Maryland’s capital city region.

February 9th, 1964 became a pivotal moment for the quartet and teenage music artists everywhere. It was then that The Beatles changed music forever with their US TV debut on The Ed Sullivan Show. Overnight The Torquays jumped on the Brit Invasion bandwagon “full bore.” Long hair and matching collarless jackets became the band’s uniform. Shep Tullier was glued to every word in New Musical Express and Melody Maker (publications that were almost impossible to find in the US prior to the late-60s). “Tom Dooley,” “Pipeline,” and other Kennedy-era leftovers were yanked from the repertoire and replaced by the latest Beatles and Stones hits, and cuts from The Yardbirds, Manfred Mann, The Animals, The Kinks, and mod provocateurs The Who. At the end of ‘64 two more big changes solidified the group’s identity. They expanded to a five-piece line-up with the addition of organ player Glen Bundy Brown. The Torquays’ name came from a Ventures tune, so it had to go. As a tribute to their fresh Anglo-rock inspirations, they became The Tower Of London.

The Tower’s first major break came on July 5th 1965 when they were booked at the US Naval Academy’s Independence Day fireworks display as a fill-in for the Navy marching band. The event was supposed to happen on July 4th but was postponed due to rain; a large number of Navy band members were unavailable on the rescheduled date. The Tower’s replacement slot was secured thanks to Joe Yanovitch’s father, who worked as a groundskeeper at the school’s stadium. An unsuspecting crowd of thousands were blown away by the boys’ Silvertone and Fender amps as their chaotic dissonance ripped through the stadium’s mammoth p.a. system. This was usually used for graduation commencement ceremonies and sporting events. The sound engineers had no clue how to handle a five-piece electric rock band with three vocalists. Tonality was a blur at best. Nonetheless it was a huge thrill for the combo and a deafening prelude to the group’s most productive period as recording artists.