Vilified for their disco stardom, the band shone in the late 1960s. 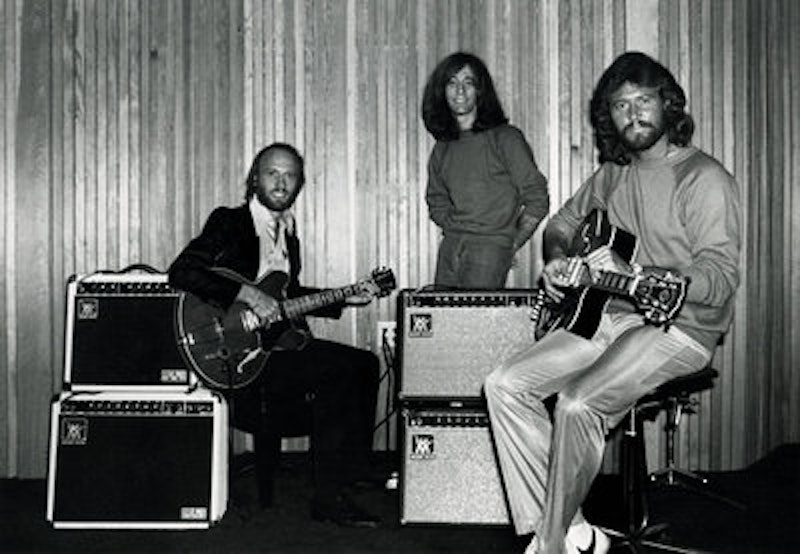 It’s entirely unfashionable today for any music fan—even aging hippies—to admit they have a flicker of affection for the Bee Gees. Short memories. The Australian/British group fell into Air Supply/Peter Frampton/Doobie Brothers land shortly after their blockbuster soundtrack to 1977’s Saturday Night Fever—although at the time, before “Disco Sucks” coincided with the explosion of punk—I knew a lot of people of sensible taste who more than hummed along to huge hits like “Night Fever” and “Stayin’ Alive.”

Yet for three years in the late-60s, the Bee Gees released four fairly terrific albums, all of which are completely forgotten now, and never discovered by younger generations who put the band in the same soiled box as leisure suits, loud ties, streaking and “The Bump.” In reality, one of the Bee Gees’ songs, “To Love Somebody,” has been covered by artists for decades, but there’s no nostalgia tour in the works as two of the three brothers, Maurice and Robin Gibb, have bitten the dust.

To a certain degree, the same disdain has enveloped the Rolling Stones—at least among teens and twentysomethings—which is understandable as Mick and Keith continue to occasionally tour (and who can blame them for the lucre it brings in?) and play the old hits for a fortune at stadiums, as well as a few crummy songs they recorded after 1973’s Goat’s Head Soup signaled an end to their vitality. (1978’s Some Girls was a brief respite from that slide, with “Shattered” and “Beast of Burden,” but really, the jig was up after Exile on Main St.) I’ve harped on this before, and will again: before the bloat, marriages, Mick’s celebrity fetish and Keith’s rehab stints, records like Between the Buttons and Beggar’s Banquet were nearly unsurpassed, and, along with Let It Bleed, made the Stones the Stones. Too bad Martin Scorsese, who seems to include “Gimme Shelter” in every film he makes, doesn’t do the same for “Complicated,” “Jigsaw Puzzle” and “Sweet Virginia.”

Back to the Brothers Gibb. In the spring of 1967, after the release of the mind-blowing double-sided single from the Beatles, “Strawberry Fields Forever”/”Penny Lane,” the rock world (and this was pre-Rolling Stones and mass music criticism) and nearly everyone I knew, not to mention millions of fans, were eagerly anticipating the band’s follow-up to Revolver. It was April, and on New York’s pioneering WNEW-FM, the far-out-maaan deejay Rosko, nearly every night played a “mystery tape” that he strongly suggested was a smuggled acetate of the Beatles’ new album. I sort of bought Rosko’s patter, even though the songs weren’t quite in sync with even the poppy “Penny Lane,” mostly because the conspiracy was fun.

As it turned out, the record was in fact the Bee Gees’ debut LP, Bee Gees’ 1st, and if it didn’t have a smidgen of the sensation known as Sgt. Pepper’s Lonely Hearts Club Band, it was an excellent record, at a time when excellent records hit the radio almost every single week. Songs like “New York Mining Disaster 1941,” “Holiday,” “Turn of the Century,” “I Can’t See Nobody,” “Every Christian Lion Hearted Man Will Show You” and the aforementioned “To Love Somebody” were high-quality pop and the album sold well. Same with the next one, 1968’s Horizontal—“Lemons Never Forget,” “Day Time Girl,” “The Change Is Made” and “World”—and Idea (also ’68), which included “I’ve Gotta Get a Message to You” “I Started a Joke” and the title track. Another great single, “Words,” was put out during this time, and wound up on their first Greatest Hits album, as well as the band’s first notable single “Spicks and Specks (’66).”

I was in eighth grade in the spring of 1969, and on a visit with my mom to Chicago—my first plane trip—to see my brother Jeff and sister-in-law Mary, I somehow managed to ditch the three of them for a couple of hours one afternoon and made my way to Old Town, Chicago’s hippie/yippie enclave that was its East Village. In a record shop, I was stunned to see the Bee Gees’ latest, a double-album that was both grand and simple: the record was gussied up in faux red velvet, yet featured nothing more than the band’s name and the title, Odessa, on the sleeve. Odessa was a “concept” album about a shipwreck in the Baltic Sea (and came out before The Who’s Tommy), and if a bit late in that quest—Sgt. Pepper’s and the Zombies’ Odessey And Oracle beat them, and Tommy was far more accomplished—it was the band’s most ambitious project to date. Also, their last great record: they temporarily broke up after ego problems between Barry and Robin, and then reunited and proceeded to several years of gloppy songs, which culminated in their disco glory.

But what a record! The title track “Odessa,” at seven minutes, is the standout, but there are also gems like “Lamplight,” “Black Diamond,” “I Laugh in Your Face,” “Whisper Whisper” and “You’ll Never See My Face Again.” The big hit was “First of May,” with Barry on lead vocals, but that’s a minor song in retrospect. Odessa sold fairly well, but it was really the last gasp for the Bee Gees as an extraordinary band.

I still listen to those four albums, and, unlike a few blemishes I’d like to forget—Yes’ “Roundabout” and the post-“Go Now” Moody Blues—make no apologies.