A Few Too Many Hits of Christmas Cheer 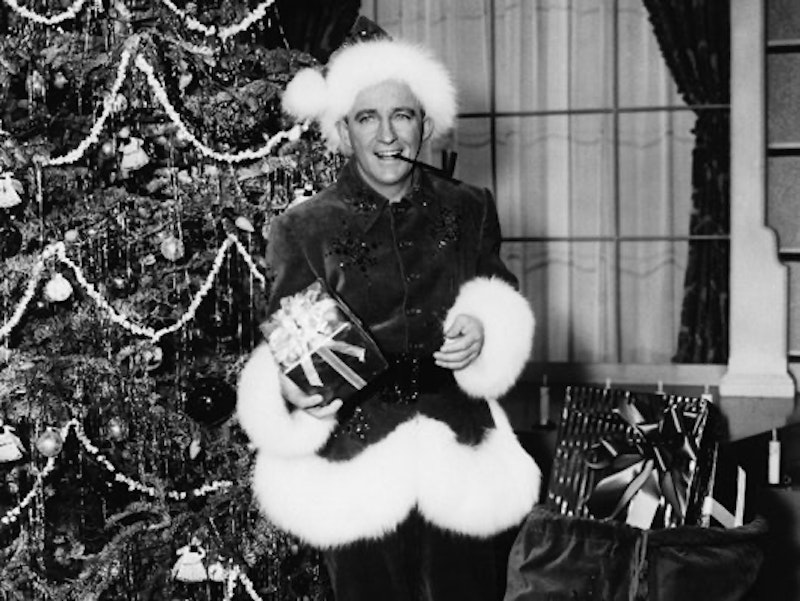 If any single characteristic describes Bing Crosby’s oeuvre, it’s probably “mildly drunk.” “Snow” is a notable exception. On a superficial level, “Snow” is about that cold, tingly stuff the Eskimos have so many names for—a hackneyed expression of desire to engage in snowball fights, build snowmen, ski, leap face-first into a huge field of soft, easily-shoveled flakes. But as the singers’ golly-gee surrealist gusto and jazzy-snazzy harmonizing shoves past enthusiasm into the realm of pure delirium—a place where showering in snow somehow seems attractive, where everything seems to be fucking made of snow—it’s becomes abundantly clear that these four are at the tail end of a comedown from a killer cocaine high and are actively fiending for a couple extra grams to hold them down until the storm finally clears.

Entertainers make the vintage Christmas carol look so easy. In this enlightened era of pop nostalgic infinity, we’d certainly like to pretend that a Sammy Davis, Jr. or a Rosemary Clooney experienced the assembly-line production of personalized standards with as much light and ease as we consume them today. We like to picture them laughing, lighting cigars, dousing one another with bottles of expensive bottles of Atlantic Records-sponsored champagne. Yet in truth, theirs was a sordid hustle. Today, even the least prestigious producer can effortlessly conjure up canned orchestra grandeur or rollicking piano thunder for wannabe Frank Sinatras or Dionne Warwicks slumming it for an advent payday. But back then? In that studio, you had the producer, the producer’s assistants, the big star, the back-up singers, every member of the band, the big star’s entourage, the A&R, the A&R’s understudy—and all of those people were flying out of their fucking gourds on trucker speed, all at once.

Dino delivers “Marshmallow World” like a venture capitalist who’s just stumbled out of the warmth his remote Aspen chalet into a brisk snowstorm as the handful of Quaaludes from earlier is kicking into high gear, a snifter of brandy in one hand and a nubile, scantily clad Playboy bunny in the other. Obviously, as a charter member of the Rat Pack, the guy is totally conditioned to straight-up maintain in all sorts of circumstances, but here he wears the effects of intoxication rather broadly: notice the spills and trills in his phrasing, how coyly Dino makes them seem like flourishes or affectations when, really, he’s a mere heartbeat or 10 away from losing consciousness altogether. All of that while hallucinating that the entire world, except for him, is a frickin’ marshmallow. What a bro.