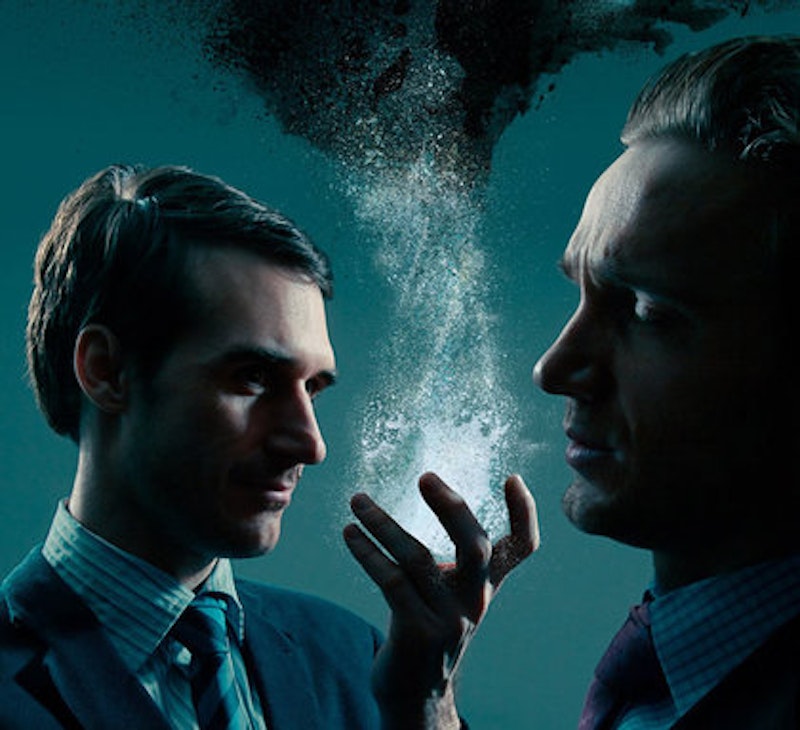 If you know how to relax, then you have a massive advantage over most other people, because relaxation is a hard thing to come by. The getting there is what presents the most difficulty, transitioning from whatever is eating you whole to an unencumbered, Zen-like state where it’s possible to really enjoy whatever leisure activities you prefer. It’s dawning on me lately that I’ll never be this sort of person. A quiet afternoon alone with a good book will never suffice, because my underlying, undying restlessness will drive me to pursue any number of other available distractions.

Mountains specialize in the sort of dreamy, ultra-precise instrumental glide that should be capable of unknotting my back muscles but never quite succeeds because it’s all simply too placid, too seraphim, too anesthetizing, a paternalistic brand of New Age perfectionism. What usually happens is that a Mountains album floats into my field of listening for a while, comes very close to satisfying something within me, then is chased away by other, more quintessential drone, but then the album gradually boomerangs back and I find myself asking myself how I ever managed without it close at hand.

“Map Table” itself is too literally and unpackable for my tastes while it’s happening—crisp guitars rob this sort of music of the featureless opaqueness it requires, frankly—but it’s missed when it ends, and the mystery of the title beguiles. I mean, it’s like a leftover June of 44 song title that implies that one has devoted an entire room or manor wing to the study and practice of cartography. Which, Mountains? No way you’re cartographers. Are you?

“Boy Trouble” doesn’t have a video. I know this for a fact; I checked. It needs one, that’s for sure. Set in an Italian villa, seaside, shot in black and white with the occasion severe streak of red, lots of fixed facial singing shots like U2’s “One.” Actually, wait, I don’t know if the cameras would even need to actually move, since the plot would portray Benoit Simon and Benjamin Myers as laptop-appendaged minimal house dweebs swarmed and adored by devil-may-care European fashion models. The gag: the models want the boys, who are all about minimal house jams and nothing else, but the boys are listlessly anthemizing—“deadpan” works as a descriptor—about how hard this devil-may-care European fashion model aggregation racket is, what a struggle, especially while one is simultaneously establishing minimal house jam cred. There might be a scene involving simulated sex, but then the camera would cut away and you would realize that Simon or Myers was merely pretending to service a blow-up anime doll. This video would be amusing to me but to no one else, because it could profitably be smuggled into mid-1980s MTV rotation without anybody being the wiser. Back then, everybody was trying to fake the future, so who’d bat an eye at laptops and iPhones? Whatever: this shit is so much doper than LCD Soundsystem ever was.

The Chemical Brothers, “Brothers Gonna Work It Out”

It was late 1999 or early 2000. I was surviving a year-long stint as a general assignment reporter for a small newspaper on the Eastern Shore. Home was a bedroom in a 100-year old farmhouse on the Delaware border, just around the corner from where a pair of sisters were killed while tending their general store, just across the street from a motorcycle retailer/repair business housed in a featureless white bunker block and, sometimes, a fortysomething Republican hippie who rode a hog of his own, lived in a trailer, and was always high. This was the sticks; the insect inundation was just short of Biblical after dark. My landlord was a genial paramedic/EMT stationed over in Annapolis. An editor warned me that the Klan was still alive, out here. Corn fields reigned supreme. Weather events were epic. I was in a non-zone. I was slowly figuring myself out.

You don’t care about any of that, and most days neither do I; but this is the milieu that “Brothers Gonna Work It Out” calls to mind. The context, to say nothing of inherent contrasts, the rural desolation of reality and the idealized urban edge mixed and mashed into narcotized froth by the Chemicals, a simulation of fascination. In retrospect it occurs to me that the album allowed me to pretend that I was living a far more meaningful and interesting life than I was, replete with awesome friends and adventures and private jokes, even though I lacked the ambition and self-confidence to really pursue those things. There was the Internet, or the Closure double-VHS set, or pornography, or the telephone, because everyone was far-flung and isolated. This was a period where I wrote a lot of letters, and people would write letters back, and so on, and was only after that period wound down that I realized that something special had been lost forever. None of which explains why this song doesn’t leave me especially sad, wrecked, hollowed out, why I’m ultimately as emotionally threadbare and numb as its starched, old-school grooves.