Jesus Would Have Liked The Chariot

Caution: Moshing May Cause Serious Injury. 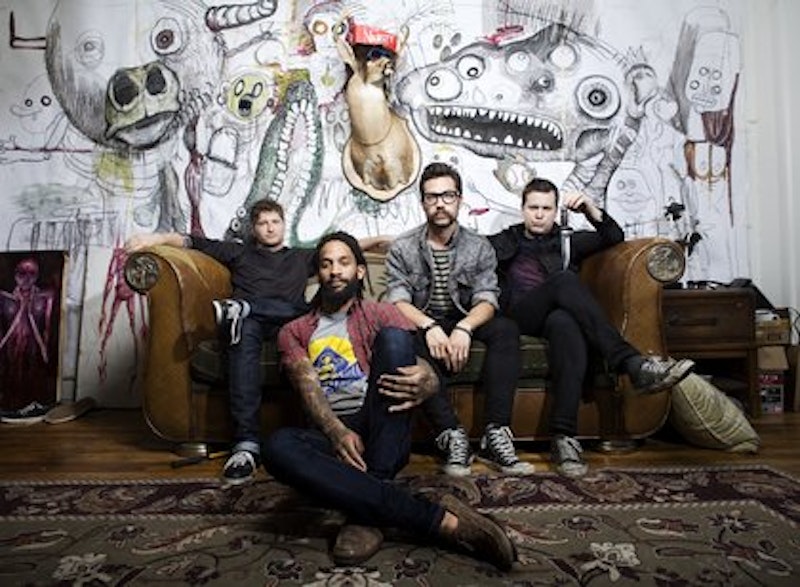 If it’s true that Jesus was an anarchist—a man who sought to de-centralize authority and eradicate wealth inequality—The Chariot is the only Christian hardcore band I know of that he would’ve liked. I saw them last week, in Fresno, California, at a Warped Tour off-date show.

The venue was in North Fresno. Driving from downtown, which is in the south part of the city, the blocks become much larger and everything is more spaced apart. Strip malls and box stores line the roads, and I mostly see white people. Two of my friends and I stood outside the venue, which only books Christian bands. My buddies wanted to smoke before we went inside. Three hipsters standing in front of a concert venue—it was obvious that we were there for the show. An employee came outside and told us that there was no loitering.

Un-ironic signs that read, “Caution: Moshing May Cause Serious Injury,” and “You are Now Entering a Jesus Zone,” hung on the walls. If you wanted to get in the pit or hardcore dance, you had to sign a waiver. If you were caught in the pit without the proper wristband, you’d get kicked out. Inside the main room, security guards stood near the stage, watching to make sure no one got out of line.

A Christian death metal band played before The Chariot, and they were really good musicians. The drummer played 30-second note double-bass rolls and blast beats beneath complicated guitar riffs and Cookie Monster growls. But they were tight in a way that sounded robotic. I don’t think Jesus would have approved.

When The Chariot began sound check, I immediately noticed that their guitar amplification was louder and more full than the other band’s. An array of complicated lights, switches, and knobs adorned the death metaller’s amps. Both guitarists of The Chariot used the classic 1970s 100-watt tube amp set-up that’s more popular in stoner rock than metalcore—a plain-looking amp on top of a half-cab. The drummer’s four-piece kit was about half the size of the death metal drummer’s kit, which had all of the bells and whistles that drummers like Terry Bozzio love.

Instead of shouting things like, “Come on, I want to see this pit move!” and telling the crowd to get pumped up, Josh Scogin, The Chariot’s singer, began the set by nonchalantly saying, “We’re going to play some songs we wrote.” The band immediately created a chaotic mass of noise that only briefly subsided throughout the next 45 minutes. A lot of their music is fucked up: it doesn’t always make sense on a technical level. Just before you feel like you’ve sunk your teeth into a certain part or riff, they throw in an extra beat, or take out a beat, or make a weird change, always finding ways to de-center their own music.

Underneath feedback-drenched walls of distortion, David Kennedy’s awkward, energetic, and unpredictable drumming, and Scogin’s throat-ripping shouts, The Chariot was tight. It was a barely-controlled chaos that constantly pushed toward frenzy; but their music also had a depth and groove rather than the rigid, metronomic tightness I commonly hear in tech metal.

As they played songs from each of their five albums, guitarists Brandon Henderson and Stephen Harrison wildly swirled and jumped. Tricks like playing behind your head or flipping your guitar around your back have become standard in metal and hardcore, and, in the worst cases—Atreyu, Killswitch Engage, etc.—can feel contrived. Both guitarists for The Chariot, as well as Kennedy and Scogin, were channeling some otherworldly energy.

When the crowd surged toward him, or when he could see that a fan knew the words, Scogin would hold his mic out for other people to sing into. During a few of these moments, a security guard pushed kids away from the stage, or tried to break them up, even though no one was getting violent. Each security guard wore a bright yellow shirt that read “Peace Patrol.” I talked shit about the venue the entire time—both to my friends and in my head—but Scogin only said kind things about the place, repeatedly thanking them for putting on the show. He also tossed his mic stand eight and 10 feet into the air throughout the set.

The Chariot ended with “The City,” a four-minute post-hardcore jam about a revolution of ideas. The song’s energy kept building as the band thrashed in off-kilter d-beats. After Scogin finished the last refrain—May the history book read all of our names/Be it blood, be it ink, but at least we were free—he and Kennedy broke down the drums, carrying the kick, snare, and a cymbal into the middle of the crowd, setting them on the floor. A mass of fans surged around them. The last minute of the song is a backbeat breakdown carried by a smartly monotonous guitar riff and group sing-a-long. Along with The Chariot, most of the crowd sang the three long “Ohhhs” that comprise the lyrics of this section. I felt like I was part of something important—a feeling that dissipated after the set.