Kanye West Holds Nothing Back On Yeezus 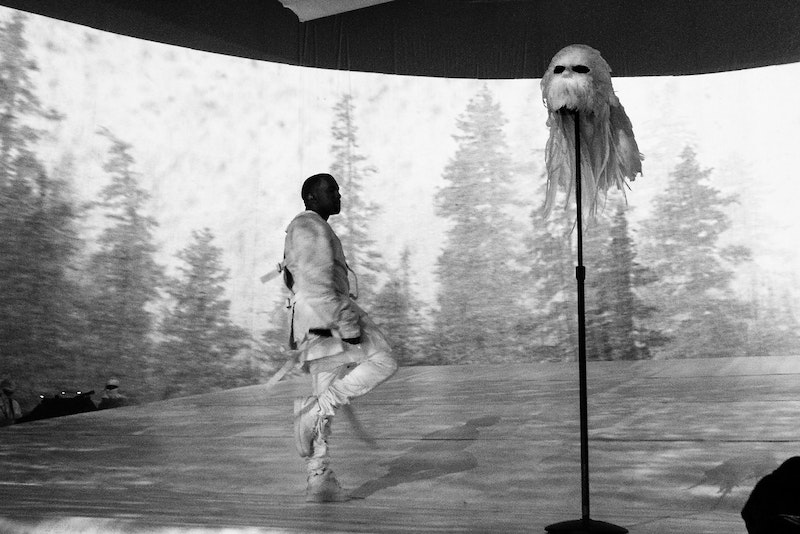 On his new album, Yeezus, Kanye West declares "I am a God." For a man of West's egoistic leanings and outsized personality that statement is more than braggadocio. Not one for the status quo, the production in his solo work has continually evolved. West had gained major critical and commercial success for his RZA-inspired production on The College Dropout. Two albums later he had moved on to a tightly executed ten song, forty minute orchestral pop format. It's an unlikely followup, an album of new wave inspired tunes could very well have turned out to be a commercial disaster. Rather than crash and burn it was that album, 808s and Heartbreak, that gained major sales on the back of its ubiquitous radio singes. In turn it gave West major credibility as a pop innovator.

While the label "innovator" has more or less stuck, there has been an equal evolution in his self-hype. It is impossible to fathom a man who loves himself more. While he attempted self-identification with the common man in his earliest work, by My Beautiful Dark Twisted Fantasy that pursuit
reached a dead end. West was livid about a great many things on that record, from race politics, alimony lawsuits from imaginary women, the interruption of dinner parties, and the question of why it seemed not okay to demand threesomes from one's partner on a regular basis.

The presentation of Yeezus, a bare CD in a gem case enclosed by red tape seems to make an obvious statement. West wants you to listen to the music without having any expectations of its conceptual framework. The Daft Punk-produced opener, "On Sight," proves an accurate guide to the album's sonic themes. A cascade of acid house baselines and distorted snare drums crackle with energy, while West explodes on a laundry list of non-sequitors. "On Sight" reads less like hip hop and more like a very open ended free style to a channel surfing competition.

While Yeezus is more industrial than most hip hop albums, it doesn't feel shocking because it lacks control. There is hardly a moment of screaming, percussion dropouts, or distortion that are in league with the unexpectedness of, say, a DIY noise band. Rick Rubin's executive production most likely had the biggest say in the scaling back of West's signature lo-fi percussion and sampling use. Yeezus is, in a certain sense, a designer industrial music album in which every sound is created so as not to offend.

It is hard to listen to Yeezus and not feel as if West cobbled together its lyrics in one alcoholic evening. It is tempting to interpret the album as a
regrettable dinner conversation by a man interested in race politics who would much rather talk about getting laid in the bathroom between courses. However, a more compelling read is that it is a boldly unfiltered presentation of Kanye's id to the public eye. What is mystifying about this is not why anyone would portray themselves as such a monster, but why no one before had seen reveling in it as a form of art unto itself. It's impossible to imagine the sort of personality who could represent such deeply misogynistic viewpoints while transitioning into fatherhood. However, like many things in Kanye West's world, he just wants you to hear him out for who he is. If you're up for playing along with this plea, then the sheer gusto of Yeezus will entertain.