Future Islands Reinvent Themselves As The Snails 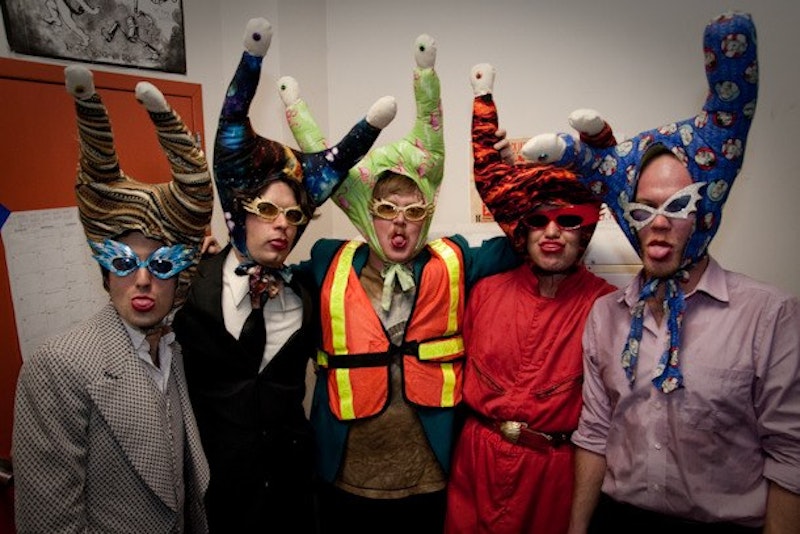 Baltimore via North Carolina pop group Future Islands have undoubtedly been one of the city’s red-letter bands for three or four years now. They regularly headline and sell out places where people have seen them half a dozen times before, with diehards lining every crowd, singing every lyric, mimicking singer Sam Herring’s operatic thrusts and poses. Even Ryan Gosling is a devoted fan. With three full-lengths and a couple EPs, Future Islands remain an obsession for thousands, not the millions they deserve. No one can predict how big they’ll grow with their next record in 2014, but for the past year, Herring and his bandmates William Cashion (bass) and Gerrit Welmers (synths and drum programming) have been taking it easy from Future Islands, deigning to lay off the perpetual record/tour/record/tour cycle they’ve been on since their previous group, the brilliantly named Art Lord & the Self Portraits, formed more than a decade ago.

Rather than rub their thumbs or swim in their infinite mountains of cash, Cashion, Herring and friends recorded five songs as The Snails last year, a project originally started five years ago when Welmers was out of town. This past spring, they played a number of shows up and down the East Coast, performing in snail masks, and finally released their debut EP, Worth the Wait, a double seven-inch on translucent pink and green vinyl. They look like Devo in the above picture, and their record label calls them “Baltimore’s answer to the California Raisins,” but their songs wouldn’t feel out of place on a Future Islands release, where sincerity and bleeding heart passion pervade. The conceptual bit isn’t played out or played down—when Herring (“Sammy Snail” in the liners) sings “the reason for my body is work, work, work” on “Coconut Boat,” there isn’t an ounce of goofiness or wink-wink pretension. These guys actually succeeded at making catchy, substantive songs about being a snail.

The production is airy and sea salty, as if the band had practiced and recorded inside a conch. “Haters Be Learners (Respect My Snail Style)” is the most immediate song of the bunch, all minor key and bouncy, with a total earworm vocal hook that is distinctly Herring: pleading, bursting with passion, and enormously endearing. One of his greatest skills as a frontman is being able to convey emotion theatrically, without ever coming off as insincere or histrionic. “Sweet Tea” is the hands-waving, phone-glowing closer anthem, the story of a snail slowly inching its way towards a delicious liquid reward, with a loping bass line that sounds as if it’s coated in slime. Worth the Wait is an enormously satisfying EP and a welcome gesture from Herring, Cashion, and friends that writing moving music in good faith comes easily, even if the presentation is as silly as can be.