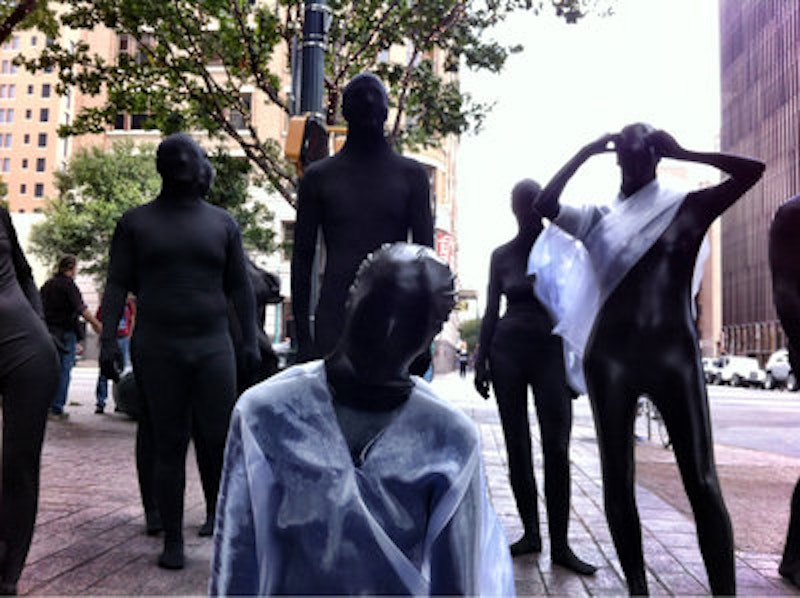 A tantric orgasm wrapped in a God-level brain-freeze submerged in a vial of liquid THC, "Cosmic Gloss"(pictured) is the glorious mess that never quite ends, a perpetual gush that mashes pop, prog, gospel, soul, and psych into a pulp without making it sound like it was actually work. Voices become fusillades or, more often, textures: launched into rainbow-light stratospheres or irradiated by sweeps of omnichord or fed through synthesizers and dribbled out or trampled by fake drum corps. I have no idea what Zac Traeger and Shmu are trying to tell us, but they communicate it with furiously over-ornate gusto, like Animal Collective working on a $3 million commission to write the score to a musical about Liberace's interior decorator. This shit is huge and bizarre and tacky and transportive in a way that begs for a loud, wide airing. I wish thousands of people getting eaten alive by mosquitos in a cornfield could hear this song through humongous speakers; I can't be the only one.

TAHNZZ is the nom de arte of one Tahnee Udero, of Albuquerque, New Mexico. Udero's lane—thus far, and particularly on "Come to Pass"—is a spastic, terrestrial thrummmm that incorporates high-pressure storm systems, helicoptering rumbles, and the sundering of AM radio signals. The key phrase here, I think, is "black hole": there's the continuous sense, on "Pass," of being shunted from one area of the song to another in the same way that black holes shuttle and shuffle matter around solar systems. So one second you're cooling your heels in what sounds like the belly of an active broiler, then it's as though you're riding an oil drill into the Earth's very core, then you've been miniaturized and handed a nano-sized surfboard and directed to surf frequently interrupted gamma waves. At the end, Udero strips away the excess to reveal cosmic signals and the mere suggestion of rainfall. I could seriously take up long-term residence in a bathysphere with jams like these piped in and nothing else. Really: I wouldn't even need food, drink, or toiletries, nothing, just mainline me that straight uncut Udero.

Dan Bodan's singing voice reminds me a bit of Little Wings' Kyle Field—this kind of wandering-out-on-a-shaky-limb warble that has no real business (or not that much, anyway) anywhere outside of the indie/underground milieu that Field inhabits. DJ Richard's remix of "Anonymous" subtracts all the busted-relationship yearning and replaces it with cyborg vocal loops and bursts of hard knocks like the fuzz at your apartment door, making the original background less narrative-friendly, more murk-indebted and industrial, eventually. Everything has been rearranged and certain elements accentuated or digested for the lysergic effect.

It's kind of like if you watched a traditional romantic drama that hits all the usual marks with the sort of pacing you would expect, but then you watched another version of the same movie, in 3D, where, say, a credenza and a wicker sofa and the main character's left eye jump out and seem to float in the ether field between the big screen and your vision, plus people's mouths are moving but no corresponding sounds are heard, plus the movie is somehow 50 percent longer, plus colors have been lightened or deepened for unknown reasons and it feel like the action is taking place underwater. Which is why this remix is awesome, in a Nine Inch Nails Further Down The Spiral UK CD5 sense.