And that's alright with me. 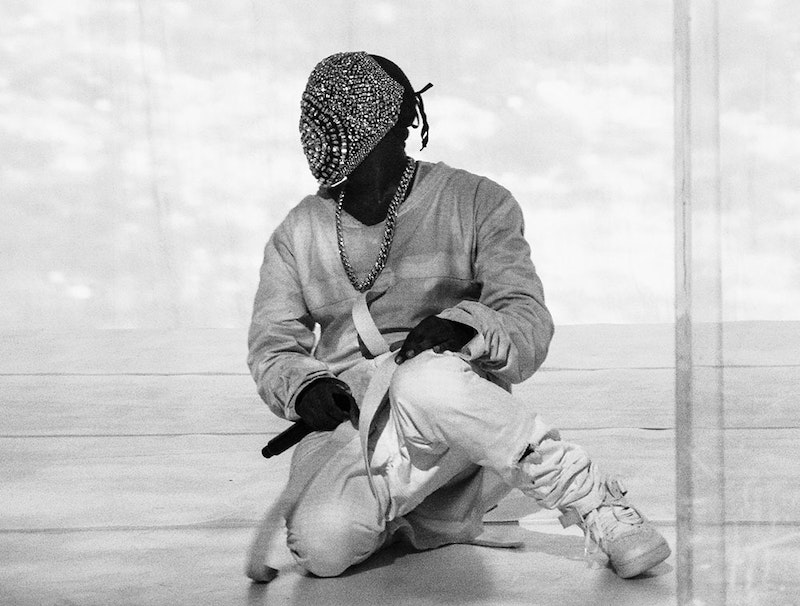 Avoiding Kanye West and his work is impossible. Even if you refuse to give any of his albums a front-to-back listen, he’s in the air. For nearly a decade, West has been imposing his phallus on pop culture, making as much of an impression with his music as his behavior. His two most notorious stunts sit at opposite poles of acceptable narcissism: in 2005, during a Hurricane Katrina charity telethon, he bluntly stated that “George Bush doesn’t care about black people.” Obviously he was right, and it was a risky but important thing to say at the time, when non-Anglo citizens of New Orleans were being ignored by the government and portrayed in the media as “looters,” itself a weak stand-in for “savages.” West put his reputation on the line to say something important that was going unsaid, without a second thought. On the other end, interrupting then-19-year-old Taylor Swift’s acceptance speech for her first VMA in 2009 was completely classless, and he was rightfully reviled pretty much universally, until he made another successful album a year later...

There are entire fleets of boring pop stars drifting about the stratosphere alongside West, but he is unequalled in his righteous and reckless egotism. None of his peers are as open and honest about their own narcissism, and West’s morbid self-obsession is so much more compelling than the pop star who punches the clock onstage and only tells his hookers he thinks he’s a God. The escalation of West’s messiah complex is entertaining enough in and of itself. Like I said, at his level, there are so few artists that are even interested in stirring the pot and being a genuine fucking weirdo. My Beautiful Dark Twisted Fantasy had the same lyrical themes: fame and its deleterious effect on the soul, but that record was built from the ground up as a pop smash, his redemptive comeback in the public eye. Now, after his equally massive collaboration with Jay-Z on Watch the Throne, West has absolutely nothing to lose.

Yeezus isn’t his Metal Machine Music. It’s not completely incoherent and beyond declaring himself a God, “New Slaves” and “Black Skinhead” tackle institutionalized racism and dead-end consumerism. When you’re this notable, it’s your duty to use that platform to challenge people. This is a fraught, angry, and abrasive record, full of hard clipping, atonal and minor key progressions (zero hooks), industrial sounds, sinister synths, and a barking lyrical delivery. Is it sonically innovative? No. These are sounds and techniques familiar to fans of drum and bass, drill, trap, industrial music. But I ask you to name another active American performer who sells out arenas and has challenged his audience as continually as West has. This isn’t Throbbing Gristle, but it’s closer to a noise record than anything else as big. I heard Yeezus blasting from three separate cars on a short walk last night. Millions of people are being exposed to sounds and ideas they might not have encountered otherwise, and that’s what matters. Preaching to the converted isn’t going to change anything. Kanye West is unavoidable, and though his persona may be a non-starter for many people, I have to support his unflinching integrity in making a dark, dark record, and challenging an audience he could easily placate.