“It’s a Heartache” Does All Right, So Does Rod Stewart

In praise of warhorses. 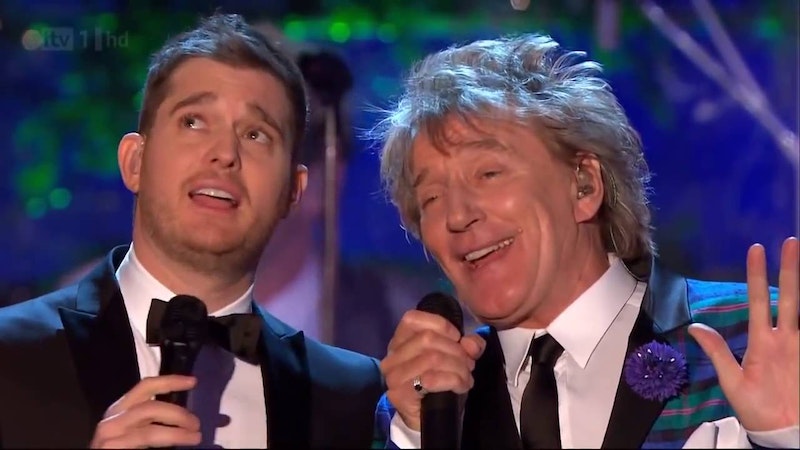 “You should! You should! Who doesn’t want to see that concert? Bublé and Stewart, coming to a stadium near you soon!” That’s the breakfast host at BBC Radio 2, bellowing as the clip ends. We’ve just seen Rod Stewart perform “It’s a Heartache” during his visit to the host’s show. Michael Bublé was also there, having been interviewed by the host earlier in the program. As Stewart performed, Bublé innocently clapped and jiggled along, enjoying himself as he listened on his headset. Then Stewart beckoned him to the microphone, where Bublé had to confess that he didn’t really know the song. After this Bublé gamely hung about the mike, throwing in a “let you dow-huh-huh-howwwnn.” He looked like somebody feeling the burden of being a good sport.

Stewart, apparently in a very up mood, closed the song with “We are touring together!” And the host took off with his “You should! You should!” I take the host’s outburst to be a mark of authenticity. Bublé and Stewart might’ve been staging a little comedy; it might’ve been a Sammy Maudlin bit, celebs making a show of their goofy chumhood. But then Stewart would’ve been cracking up at the mike or doing a doubletake, and the host would’ve been shouting about how things get a little crazy at this time of the morning. Instead they acted like matters had come off without a hitch. So Bublé actually was at a loss.

This suggests that everything else in the clip is true. Most notably, that there’s something wonderful about having Rod Stewart perform a song nearby you. It’s been years since I thought of Stewart, and back then it was to wonder why I belonged to a CD-of-the-month club. But the man is life itself. Watch him in this clip and you’ll see. At 73 he has a face that seems to have become more fully itself and quite content as a result. After a half century of being a spoiled celebrity, and at his age, he’s still somebody who moves for the fun of it. In the studio at BBC2, he gets a kick out of singing his old warhorse one more time.

Like Stewart, “It’s a Heartache” came after rock’s heroic era, and like him it’s piled up money while letting the emotions pour. It has some cut-rate lyrics: “game” rhymed with “rain,” the collapsing syllables that gum up the bridge, the poorly-grounded hyperbole of “love her till your arms break” (you’re doing it wrong). Nor does the song develop all that much; it appears to be all chorus and no refrain. But what a chorus. Bonnie Tyler’s managers knew what they were doing when they wrote it. The chorus sweeps the heart. It takes in everything, front and back: the longing for what you don’t have, and the pleasure that you’re still alive and standing and can yowl forth your pain if you feel like it. I’ve been doing that for the past week or so, and I’m happy to see Rod Stewart can do it far better. Michael Bublé gets a nod for sportsmanship.