Doesn’t matter much now, but Dylan’s original Blood on the Tracks was better. 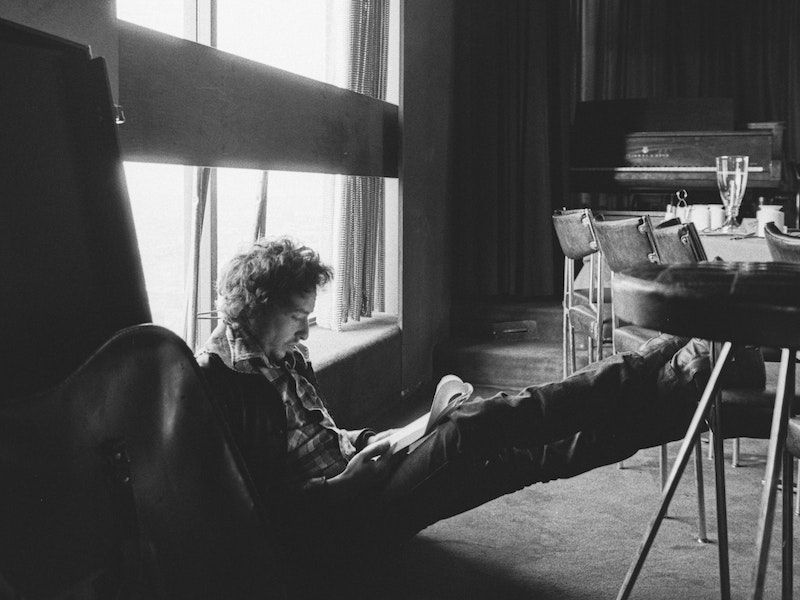 The release of Bob Dylan’s More Blood, More Tracks (“The Bootleg Series, Vol. 14”) is more than a curio, but at this point, 43 years after Blood on the Tracks was released, it’s an historical document mostly for an aging audience. That includes me, even if I’ve never considered the record one of Dylan’s “masterpieces” (although it’s definitely his last great album). When the invaluable “Bootleg Series” began, six years after 1985’s career-spanning Biograph, it was exciting, hearing unreleased alternate versions of Dylan songs, as well as those heard for the first time (except for bootlegs). By now, in 2018, with the songwriter 77 years old, the cupboard’s running bare, and I’m not sure what else can be unearthed.

Nevertheless, I spent last weekend listening to nothing but More Blood—the original, mostly acoustic album recorded in New York—and the final product with five songs re-recorded in Minneapolis—and, as I’ve already heard most of what’s contained from boots and official releases, I wish that Dylan hadn’t changed his mind late in the game and abandoned the New York product. That’s probably a minority opinion, but the jazzed-up versions of centerpieces “Tangled Up in Blue,” “Idiot Wind” and “Lily, Rosemary and the Jack of Hearts” are a notch below the sparer renditions.

In retrospect, it reminds of Dylan’s “comeback” tour with the Band in 1974, which I saw at the Nassau Coliseum in January of that year. My anticipation was intense; after all, though I’d been a fan for years, I was just 11 when he last toured, so it was the first time I saw him live. And it was very cool, actually seeing Dylan on stage, but I left slightly disappointed as he and the Band whipped through the two-hour set, with Dylan screaming—as opposed to spitting—out the lyrics. Far superior was the show I saw in December of ’75, “The Night of the Hurricane” at Madison Square Garden, with his rag-tag Rolling Thunder entourage and a sprawling, full-of-surprises set. Curiously, at that concert he included just one song, “Simple Twist of Fate,” from Blood on the Tracks, which seemed odd.

There’ve been a slew of reviews of More Blood in the past week, and the majority claim that Blood on the Tracks was the first “substantial” album from Dylan since John Wesley Harding. Nashville Skyline was slight, aside from “I Threw It All Away” and the Johnny Cash duet on “Girl From the North Country,” but at the time I thought Self Portrait was terrific, if a jolt to Dylan fans. (Which was undoubtedly his intent; a double-album comprised mostly of covers of songs he liked, which he’d also do later in his career, this time to the critics’ praise.)

New Morning was uneven, but featured “Went to See the Gypsy,” “Sign on the Window,” “If Dogs Run Free,” and “Day of the Locusts.” There was his star turn at George Harrison’s Bangla Desh concert in the summer of ‘71, in which he gave “Hard Rain” and “Mr. Tambourine Man” a country twang—but not quite the same as his wonderful Isle of Wight concert in ‘69—and then just months later, a guest appearance with the Band with a rocking “When I Paint My Masterpiece.” Add in the singles “Watching the River Flow” and “George Jackson,” as well as “Knockin’ on Heaven’s Door” as well as half of Planet Waves in early ’74, and the idea that Dylan was creatively dormant from ’69-’74 is proven bankrupt.

Anyways, it’s said that Dylan was convinced by his brother David Zimmerman and other Minnesota friends that the New York-recorded Blood on the Tracks was too dour, and unlikely to sell well, and so he re-recorded half the songs. Who knows? People cite Dylan’s comments to that effect in his book Chronicles, but while an outstanding book it’s hard to separate the truth from Dylan’s purposeful and entertaining spoofs. (Do you really believe Ricky Nelson was one of Dylan’s seminal influences? Me neither. He did love Nelson’s tune “Lonesome Town,” but it’s not like the TV heartthrob was the Everly Brothers or Little Richard.)

Longtime New York Times music critic Jon Pareles spoke for the majority on More Blood: “But in the end, Dylan knew best. The Minneapolis versions unleashed the suppressed anger in ‘Idiot Wind’ and brought the momentum of a band to the long quasi-narrative of songs like ‘Lily, Rosemary and the Jack of Hearts’.”

I disagree. The acoustic version of “Idiot Wind,” without Dylan’s wailing and mad organ rushes, is a lot angrier. For example, in the final version he excised this lyric: “I’ve been double-crossed too much/at times I think I’ve lost my mind/Lady-killers load ice on me behind my back/While imitators steal me blind.” I’d wager the “imitators” included the ascendant Bruce Springsteen, and “I think I’ve lost my mind” shows frustration and perhaps desperation. As for “Jack of Hearts,” I flipped over the song upon buying the cassette in January of ’75, playing it non-stop (to the consternation of roommates and friends) and even started writing stories for my college paper aping its style. Years later, I’m not as crazy about the song, which is kind of half-baked, but like “Idiot Wind” and “Tangled Up in Blue,” it’s more austere and comprehensible on More Blood.

As I said above, none of this matters much anymore except to a dwindling crowd who bought everything Dylan released at the time, and like to pore over anything the songwriter produced, but it wasn’t a weekend ill-spent.