A Blissful Crackle of Nihilistic Sound 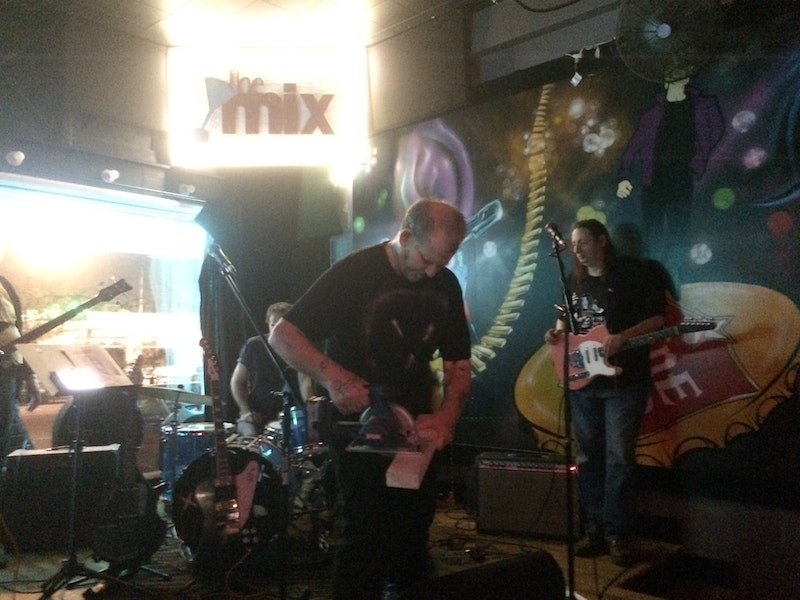 Despite boasting members from scrapes Electric Eels, Rocket from the Tombs, Mirrors, Red Dark Sweet, Johnny & the Dicks, and the New Fag Motherfuckers, Rust Belt no-wave quartet X__X attracted a crowd of around 30 at any given moment that was split between drifters and diehards. Some wandered off San Antonio’s boozy St. Mary’s Strip and into the Mix, with its no-cover-charge policy, just long enough to down a $2 well and catch a song or two. Others sat or stood still in reverence, bowled over by X__X’s 90-minute primal explorations into the primordial nucleus of rock. Strangers and fans alike came away wowed, or at least amused.

One Nike bank-teller crowd downed their last round of whiskey shots and headed for the door, where they watched with white smiles through the storefront window as John Morton, founding member, sculpted a sheet of aluminum foil into a Faraday hat and recited “I Am an Instrument,” a poem by Sun Ra. The hat ended up on the head of a bearded man in a G.G. Allin costume (blood [fake?] dripping from his sliced face onto the checkered floor).

You’re only as good as your last sandwich. Morton’s been making good sandwiches since 1972, when he formed Electric Eels in Cleveland, where the protopunk band’s belligerence toward each other and their audience gained them a reputation as “art terrorists,” so the story goes.

The current lineup of X__X features original members Morton and Andrew Klimeyk, bassist Craig Bell and Cincinnati drummer Andrew Jody. On a recent late Sunday, into early Monday, they were decidedly un-art-terroristic, choosing to sublimate direct physical confrontation into a blissful crackle of nihilistic sound. Self-aware, the band manipulated expectations by retooling its mythology. “No Nonsense”—a repetitive ripper from their original six-month, four-show and two-seven-inch stint in 1978—lasted mere measures, while “Tool Jazz” was more Bob Vila than Hanatarash.

Dopamine moments occurred during street spiritual covers of haunting classics like Albert Ayler’s “Ghosts,” a major mile marker that came early in a set full of heavy road, where Craig Bell’s bass lines shined divine energy. About 10 songs later, when they laid down Blue Cheer’s “Out of Focus,” Klimeyk and Morton twinned and twined their guitar’s upper frets toward the summit of ecstatic union between rock and poetry.

In their new cuts, too, they maintained the edge of the cliff and summit. Jody set the table for “Transmography” to hit trance faster than you can say “Rik-A-Tik.” They educated the hard way, through pure rock jack, paying tribute to late luminaries, like the Pagans’ Mike Hudson, along the trip up.