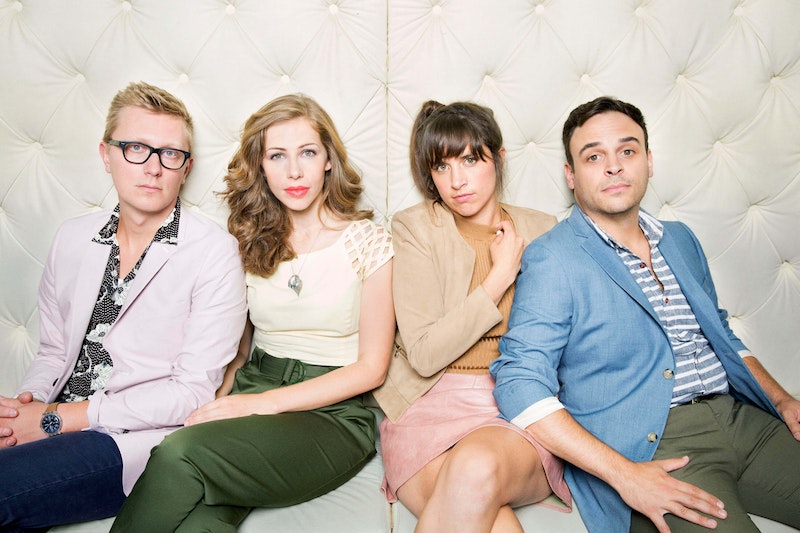 Lake Street Dive is one of those bands you love in part because no one else loves them. The quartet met at a conservatory in Boston, and they exude music nerd casual virtuosity, along with a geeky love of eclecticism for its own sake. Their best-known song is a jaw-dropping 2012 video of a sidewalk performance of the Jackson 5's "I Want You Back," done as a laid-back torch song. It's anchored by Bridget Kearney's languidly funky upright base and singer Rachael Price's stunning vocals, sliding around the lyrics with a jazz singer's ease while emoting with deep soul—she's one of the few people who can sing that song and not make you immediately say, "Michael Jackson does this better." The band jokes around beforehand, spiritedly hopping about the street.  It's a winning condensation of indie rock's charm—talented people playing outside the spotlight, making great music not for the stadium, but for whoever happens to be listening.

So when my family and I went to see the band recently in Chicago, I was a bit taken aback at the turnout. There was a long line outside the Riviera 90 minutes before the show, and the venue was packed. My secret band that no one else loved was, it turned out, not a secret at all.

Even more discombobulating was the performance itself, which was not a small-scale intimate sidewalk affair. Instead, Lake Street Dive did a glitzy rock show. There was an aggressive and unnecessary light show. There was an aggressive, even more unnecessary, and frankly baffling drum solo by Mike Calabrese, who, whatever his virtues, is no John Bonham. Rachael Price's patter was not indie-self-effacing, but pop-star default. She encouraged different sections of the audience to outshout each other; she declared her love for Chicago. The massive crowd, thrown these clichés, reacted in the expected way, cheering and clapping. I felt like I was at a pop concert (although, admittedly, the audience skewed older. NPR listeners were well-represented.)

The concert wasn’t bad. On the contrary, Price's singing is one of the most impressive things I have ever witnessed live; it's like hearing Sarah Vaughan, Etta James or Dusty Springfield in person. She's really that good—the kind of voice that comes along once in a generation, with a range backed by impeccable musicality and phrasing. Kearney on stand-up bass is also a wonder; her solos are as fluid as if she's playing an electric instrument, with the added visceral thunk you get from those giant strings. It makes your fingers hurt just to watch her. New keyboardist Akie Bermiss did a nice, 1990s-R&B influenced number as well; in just about any other band he'd be the featured singer rather than a back-up.

There was also a less slickly packaged moment towards the end of the concert. During their performance of "Dude," Price suddenly announced her sister, Emily, who strode onto stage and emitted an operatic high note, holding it as the band soared into full on stadium rock blow out. "I've always wanted to be able to do that!" Price enthused as she and her sister hugged.

The walk-on by Emily led my wife and me to do some Googling after the concert. What was up with this family with not one but two virtuoso vocalists? Emily is an opera singer who performs with Chicago a Cappella. She and Rachael have been singing since they were kids. Their father is the famous composer and conductor Tom Price; Emily, Rachael and third sister Juliette all sang with the Voices of Baha choir which Tom directed. Rachael began work with the choir when she was nine; she was a soloist when by the time she was 12. In a video of her performing in 1999 with her sisters when she was 14, she's already completely comfortable in front of an audience.

My initial impression of Lake Street Dive as a casual pleasingly amateurish indie band was, in other words, completely off base. Price is a show biz kid who's been planning a career her entire life; she's got more in common with Beyoncé than with most indie performers. Her slickness is authentic. She didn't sell out. That's who she always was.

Lake Street Drive is great, and I hope they do get to be mega-rock stars and play sold-out stadiums. Indie casualness can be a pleasing affectation, but there's something to be said for practicing your whole life so you can sing to rival Michael Jackson, who, obviously, practiced his whole life to sing like that too.